Though Byrd’s identity had been hidden until Wednesday, Trump and his foot soldiers had already peppered their attacks on the officer with dog whistles that invoked the racist trope of a Black man being violent toward an innocent white woman. 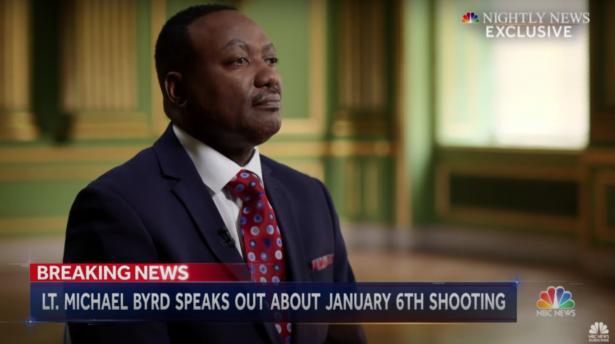 “They talked about killing me, cutting off my head,” Byrd told NBC News in one of the pre-taped interview clips that aired on Thursday and Friday. “You know, very vicious and cruel things.”

Byrd, who is Black, also acknowledged that he was targeted for his race.

“There were some racist attacks as well,” he said.

The officer pushed back against Trump’s “disheartening” attacks, in which the former president cast him as a murderer and a Democratic operative.

“If he was in the room or anywhere and I’m responsible for him, I [would be] prepared to do the same thing for him and his family,” Byrd told NBC News.

Additionally, “I do my job for Republican, for Democrat, for white, for Black, red, blue, green,” the officer said.

Byrd explained that he had decided to come forward and identify himself despite all the threats because he wanted to show “courage.”

“I believe I showed the utmost courage on January 6th,” he said. “And it’s time for me to do that now.”

Earlier this week, the U.S. Capitol Police Department announced that its investigation into Babbitt’s death found that the Byrd, who was still unidentified at the time, had acted “lawfully,” and noted that he and his family had been hit with threats.

“This officer and the officer’s family have been the subject of numerous credible and specific threats for actions that were taken as part of the job of all our officers: defending the Congress, Members, staff and the democratic process,” the department said in a statement.

Though Byrd’s identity had been hidden up until Wednesday, Trump and his foot soldiers had already peppered their attacks on the officer with dog whistles that invoked the racist trope of a Black man being violent toward an innocent white woman.

Watch excerpts from the interview

Cristina Cabrera is a newswriter at TPM based in New York. She previously worked for Vocativ, USA Today and NY1 News.   cristina@talkingpointsmemo.com |  @crismcabrera