The statute is the culmination of a decades-long strategy to end abortion without actually banning abortion. 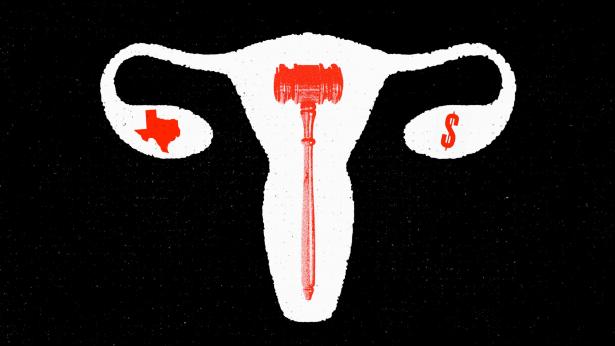 Last night, the Supreme Court faced an unprecedented emergency application. Unless the Court acted, abortion would be functionally illegal in Texas.

In May, the state had adopted a version of a “heartbeat bill” that went into effect today. So-called heartbeat bills prohibit abortions once a physician can detect fetal cardiac activity, usually around the sixth week of pregnancy, before most people know that they are pregnant. Texas lawmakers had considered such a bill before but balked at the prospect of a possible loss in court—and the thought of forking over legal fees to Planned Parenthood. S.B. 8, the law that now prevails, promised to give conservative lawmakers everything they wanted: the ability to ban abortion with none of the risk.

The key, as Texas lawmakers saw it, was not to criminalize abortions. Instead, the state has authorized private citizens in the state—quite literally any private citizen—to file lawsuits against anyone who performs or “knowingly … aids or abets” an abortion after the sixth week of pregnancy. When plaintiffs in these suits succeed—and many inevitably will—they will receive at least $10,000 from defendants and an injunction preventing a provider from performing any more abortions after six weeks of pregnancy.

Relying on individual activists to flood the courts with lawsuits might seem riskier for anti-abortion-rights lawmakers (the state would need to find a supply of willing plaintiffs rather than doing the job itself) than an outright ban, but the opposite is true. Texas designed its bill to make it nearly impossible to challenge in court.

That’s because state lawmakers and judges can shield themselves using a doctrine called “sovereign immunity,” which typically prevents someone seeking to block a state law from suing the state itself. The Supreme Court created an exception to that rule in a 1908 case called Ex parte Young: Someone challenging the constitutionality of a law can sue the state officer charged with enforcing it. But in Texas, there arguably is no such officer, because only private citizens can sue to enforce the law. Abortion providers could wait to get deluged in court, find themselves buried under $10,000 damage awards, and argue that those penalties are unconstitutional. But virtually no doctor seems ready to do that—the state’s providers have responded to the law by no longer offering abortions after the sixth week of pregnancy.

The idea of using lawsuits to end abortion emerged decades ago. Unsurprisingly, it first gained steam in Texas. In the 1990s, Mark Crutcher, an anti-abortion-rights activist from the Dallas metroplex, tried to create a self-help industry for members of his movement. He put out instructions on how to write letters to the editor and how to stay on message in debates. But he was convinced that civil lawsuits could gut Roe v. Wade. He sent out “Spies for Life” to gather evidence on whether providers in the state were doing anything wrong. And he provided lawyers across the country with a 79-page manual detailing how to sue abortion doctors for medical malpractice. The result, he hoped, would be skyrocketing insurance rates for abortion clinics and legal bills that most doctors would be unwilling to pay.

Crutcher’s strategy was quite clever: eliminate abortion access without the kind of fanfare that a major Court decision would spur, mobilizing the opposition and risking a backlash. “Right now,” Crutcher wrote, “the future of abortion in America is in serious jeopardy simply because access to abortion is evaporating.”

Activists tried to run with Crutcher’s idea in the years that followed. Most focused on patients who claimed that they had not given informed consent to an abortion (Louisiana passed a law authorizing these suits, which the conservative Fifth Circuit upheld). But interest dried up because most anti-abortion-rights leaders had no interest in slipping under the radar. They wanted to attack Roe directly, secure a decision overruling it, and lay the groundwork for a decision recognizing fetal personhood under the Fourteenth Amendment and thereby making abortion unconstitutional.

S.B. 8 is the signal achievement of strategies like Crutcher’s. With this law, Texas focused on eliminating abortion, not repudiating Roe, and the Supreme Court’s response last night—or, more accurately, the lack thereof—spoke volumes. A district court had blocked the law from going into effect (concluding that state judges were the officials charged with enforcement), but the Fifth Circuit Court of Appeals issued a temporary stay of all proceedings in the lower court, including those involving efforts to block the law from going into effect. Providers filed an emergency appeal with the Supreme Court, and the clock began to run; the Court had until midnight yesterday to act before Texas’s ban went into effect.

When the clock struck midnight, the justices had done precisely nothing. There was no order allowing the law to go into effect or preventing its enforcement. As of this morning, the justices had still not spoken a word.

Some will hesitate to read too much into the Court’s silence—after all, Texas designed its law to be difficult to challenge. And the Court already has a major abortion decision coming up: Next summer, the justices will hand down a decision on a quite different abortion law—one that criminalizes abortion after the 15th week of pregnancy. Mississippi, unlike Texas, invited a constitutional challenge because state lawmakers are gunning for abortion rights. There is no guarantee that the justices will be willing to declare the end of abortion rights for the world to see, regardless of what they do or don’t say about S.B. 8. There is also no telling whether the Court may yet rule on Texas providers’ emergency requests.

But the Court’s silence is revealing. Imagine if Massachusetts had mandated vaccines for those with bona fide religious objections and allowed private citizens to use litigation to enforce that decree. Or if California had outlawed the private ownership of handguns. For decades, the Court has written that abortion is so divisive because it touches people’s most deeply held beliefs about life in the womb, the rights of women, equality between the sexes, and the role of doctors. Whatever else one could say about the Court’s abortion jurisprudence, the justices seemed to take these clashing beliefs seriously. Not anymore. The message from the High Court was one of stunning indifference. The Supreme Court looked at the prospect of a functional ban on abortion and saw no emergency at all.

In the 1990s, Mark Crutcher predicted that the path to ending abortion might be civil lawsuits. If the Supreme Court’s inaction is any indication, he just might have been right.

Mary Ziegler is a professor at the Florida State University College of Law. She is the author of Abortion and the Law in America: Roe v. Wade to the Present.