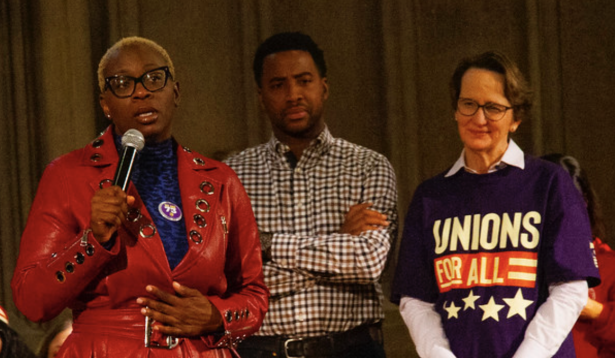 The conventional wisdom about the Ohio 11th congressional district Democratic primary was always wrong. After Marcia Fudge vacated the seat to become President Joe Biden’s HUD Secretary, the race to replace her didn’t suddenly become a battle between Progressives and the Establishment or a proxy battle.

I understand that framing the race in those terms drives clicks and allows Democratic flacks and Washington pundits to extend the cold war they’ve been fighting ever since Hillary Clinton blamed Bernie Sanders for her 2016 loss, but that doesn’t mean that framing is accurate.

The reality of the Ohio primary is that Nina Turner, whether anyone wants to admit it or not, was the Establishment in this race. She had more money, higher name recognition and tons of celebrity endorsements in her pocket. Her opponent Shontel Brown was a local Cuyahoga County Democratic Party chair, that nobody would’ve been able to pick out of a lineup four months ago. And yet, Turner still lost.

Hopefully, Democrats and the media will learn a lesson from this — but I doubt it.

I lived in Northeast Ohio off and on for a decade so let me put this race in local terms that will make sense. On June 1, Turner was leading the race 50% to 15% over Brown, yet two months later on Aug. 3, Turner lost to Brown 51% to 44%. Turner was the Golden State Warriors blowing a 3-1 lead to Brown’s Cavaliers despite both of them having home-court advantage. I saw this race through the eyes of old friends and former students in the area, a hijab-wearing Muslim woman who works in PR, a 40 something-year-old Black woman who makes a killing off ETSY, a millennial white lawyer who leans conservative, amongst others.

Do you know what word I never heard any of them use? Establishment. I bring that up because campaign post-mortems will desperately try to force that narrative despite it having little or no resonance on the ground.

The Establishment is no longer old white men in a smoke-filled room playing kingmaker. Not in an era of social media, wild-wild west campaign fundraising, and national organizers who can descend on a district like political flash-mobs after one tweet. Did Shontel Brown have institutional help? Of course. She was a local party chair and was mentored by the outgoing incumbent.

However, Nina Turner was a former national surrogate of a presidential campaign, former elected official, television pundit, college professor, SuperPAC director and lobbyist, who got endorsed by the major local newspaper Cleveland Plain Dealer, had Hollywood backing her and could raise thousands of dollars with one mass text. It doesn’t get more Establishment than that, which is ultimately why Turner lost the election.

These were the kinds of conversations and messages I was getting from people in Cleveland during the campaign:

“You can’t say voting for Biden is like eating shit. I mean, lots of people felt that way, I wanted to vote for Pete Buttigieg, but you can’t say that then run for Congress.”

“My sister went to school with Shontel, and I just don’t like that “Hello Somebody” thing, [From Turner] it sounds forced!”

“The guy in the white Nina Turner van with speakers? He was parked near my house and I talked to him, turns out he’s not even from here, he’s from Seattle and drove to Cleveland to help Turner.”

Nina Turner had burned a lot of bridges in local Cleveland politics years ago, and voters have long memories. This is not to say that Shontel Brown didn’t have her detractors; her management of the Cuyahoga County Democrats was seen as biased and one local organizer told me that Shontel’s campaign trafficked in colorism and classism. I heard a number of people complain that Brown’s only policy position was ‘supporting Joe Biden’ and they wanted more.

However, in the minds of the majority of non-aligned voters, Turner, not Brown, was the big-name establishment politician. Initially, that helped Turner when she began the campaign as the political prodigal daughter coming back to save her hometown. Unfortunately in June after she jumped out to a huge lead, her campaign went national, bringing in activist and rapper Killer Mike who insultedDemocratic power broker Congressman James Clyburn and going overboard with attack ads depicting Shontel Brown as a corrupt politician. Clevelanders have a long history with corrupt politicians and Shontel Brown doesn’t fit the bill.

It’s not a coincidence that Turner’s attacks had the dual effect of raising Brown’s profile and opening the door for outside advertising groups, including other Democrats, and yes, even some Republicans to get involved in the primary. (Team Sanders openly courted Republicans during the 2020 primary so it’s hypocritical to claim GOP support somehow delegitimizes Brown’s win).

Nina Turner raised $4.5 million in campaign funds to Brown’s $2 million and while outside groups spent slightly more on pro-Brown advertising, Turner had been on the air much longer so the air war was basically a wash. The truth is, had Turner kept the race about fighting crime in Ohio City and PPP loans for failing businesses in Tower City, Jim Clyburn would’ve never driven into Cleveland in a caravan like a Democratic King Jaffe Joffer with the entire CBC in tow.

Turner didn’t lose because of “dark money,” she lost because local voters don’t live their lives on Twitter, don’t read puff pieces in The New York Times and didn’t want the Progressive Establishment carpetbagging into town and telling people how to vote. Not to mention, Shontel Brown is actually a pretty darn good public servant.

If you could liquefy schadenfreude and inject it directly into your veins, I know a lot of Democrats who’d be high as a kite right now after Turner’s loss, but dunking on Turner or the Progressive Establishment doesn’t do anybody any good. The progressive model of success, finding a local activist or politician, training and funding them to run against an out-of-touch or do-nothing incumbent is a good model. That’s how Alexandria Ocasio-Cortez beat Joe Crowley and Jamal Bowman beat Eliot Engel in New York; it’s how Cori Bush beat William Lacy Clay in Missouri, and how Ayanna Pressley beat Michael Capuano in Massachusetts.

The Progressive Establishment model didn’t work in Ohio because Turner wasn’t an underdog and hadn’t been in the district recently but also because mainline Democrats ignore progressives at their peril. At the same time, progressives shouldn’t be calling Black voters in Ohio stupid or blaming outside money when they simply ran a candidate who had every technical advantage but couldn’t reconcile half a decade of attacking the Democratic Party with running in a heavily Democratic district.

Over 72,000 voters turned out for a special election primary in an off-year when both campaigns privately estimated turnout would be in the 40,000 range. That should be something all Democrats can get excited about and should reverse engineer heading into the 2022 midterms.

Despite the post-primary racism, vitriol and recriminations I see online, Democrats have less than a year to get organized against the onslaught of GOP voter suppression in 2022. You can’t win when you’re in a circular progressive, moderate, establishment firing squad.

Dr. Jason Johnson is a professor of Politics and Journalism at Morgan State University, a Political Contributor at MSNBC and SIRIUS XM Satellite Radio.