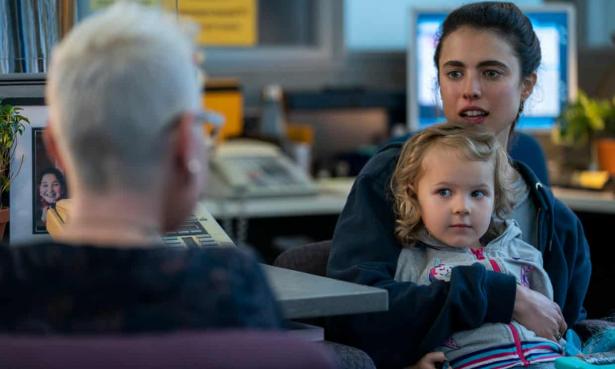 Another hurdle to get over … Maid, with Rylea Nevaeh Whitter as Maddy and Margaret Qualley as Alex.,Photograph: Ricardo Hubbs/Netflix

“Man hands on misery to man
It deepens like a coastal shelf
Get out early as you can
And don’t have any kids yourself.”

Replace the second “man” with “woman” (in Philip Larkin’s This Be the Verse) and you have Netflix’s new 10-part drama Maid in a nutshell. Inspired by Stephanie Land’s memoir Maid: Hard Work, Low Pay and a Mother’s Will to Survive, it tells the story of 23-year-old Alex (Margaret Qualley) who, with her two-year-old daughter Maddy (an extraordinarily appealing Rylea Nevaeh Whittet – and I speak as one who finds the charms of all onscreen and most real-life children resistible) flees an emotionally abusive relationship with Maddy’s father, Sean (Nick Robinson).

What follows is a part rags-to-riches – or at least to not-rags – story, as Alex starts to piece her life back together via grit, shelters, the occasional kindness of strangers and a cleaning job with a rackety firm run by an unforgiving woman named Yolanda (Tracy Vilar). Embedded within it, however, is an unflinching anatomisation of the red tape that surrounds every effort to access the (already minimal) help supposedly on offer to desperate women and their children, and the unfitness for purpose of every aspect of the state that is meant to offer succour. Alex picks her way through the demoralising labyrinth of forms, intrusive questions, document requirements, finding herself in one terrible Catch-22 situation after another until a combination of persistence and luck enable her to start a journey back to stability for them both.

It dramatises the precariousness of existence without a fixed abode, a proper income or family support and conjures a world rarely seen in real life or on screen. It illuminates all the vulnerabilities that having children brings. The slightest mishap, without the money or resources to correct it, can only snowball into disaster. Often, we see the running total of Alex’s finances, ticking down to zero before she can secure what she needs to get the next day’s cash – food for herself, petrol for the car she needs for work, the co-pay for Maddy’s daycare – let alone start saving towards a rental deposit.

It is also good at showing the insidious forms and effects of emotional abuse (more rarely depicted on screen than physical abuse is) without insisting that Alex be an ever-broken Victim-with-a-capital-V.

There are weaknesses. At times Alex feels just slightly too patient and generous with her limited resources to be true. The backbreaking nature of cleaning isn’t shown. And I could live without motherhood being presented as the great leveller between Alex and her client Regina, whose enormous house is the first she is sent to clean, which felt like a slightly retrograde step.

But these are quibbles. The detail, the tenderness, the authenticity, the brilliant performances make the whole thing both a compelling drama and a potent testimony to the suffering of too many.