The movement for voting rights and economic justice must help people understand that voter suppression is not just a “Black issue.” King explained how the white upper-class “aristocracy” weaponized suppression to undercut multiracial alliances. 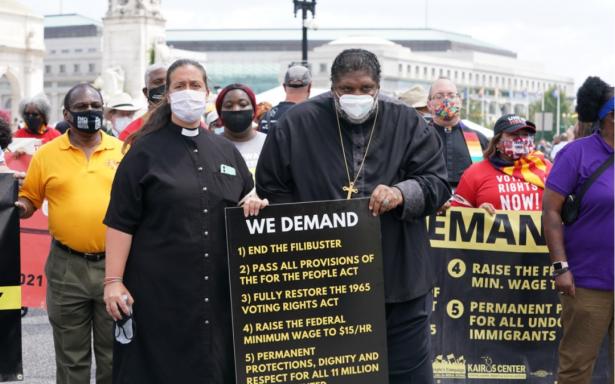 In the face of rising voter-suppression efforts across the country, we are witnessing a growing movement that builds on the proud history of the 1960s civil rights era. To be successful, today’s voting rights and economic justice advocates must apply two key lessons from the courageous activists of a half-century ago.

First and foremost, the voting rights movement of 2021 needs to reject the pressure to isolate voting rights from a broader moral economic agenda. The U.S. Constitution enshrines the interconnected commitments to “establish justice” and “promote the general welfare.”

There is a tactical temptation to win support on voting rights from political and corporate leaders who oppose demands for economic rights. Defenders of such tactics might point to the pro-voting rights statements earlier this year by hundreds of corporate chief executives and companies as an example of success.

But after scoring some public relations points, those chief executives have largely fallen silent as corporate America’s top lobbying group, the U.S. Chamber of Commerce, leads the charge against bills to protect voting rights and those to raise the minimum wage to $15 per hour.

Dr. Martin Luther King Jr. and other wise civil rights leaders of his day knew that such tactics would weaken, rather than strengthen, their cause. To inspire a broad mass movement for change, they couldn’t take a righteous stand on one moral issue while biting their tongues on others.

In fact, King never led a single-issue march. The 1963 March on Washington for Jobs and Freedom, for instance, made clear that economic and workers’ rights were integral to the fight for civil rights. Their demands included a massive training and placement program for jobs that paid a living wage and an increase in the federal minimum wage to $2 an hour (equivalent to about $18 in today’s dollars).

And they stood against the “interposition and nullification” of Southern governors and Senators who used the filibuster to kill and/or delay and weaken voting rights legislation. We must learn from their example about how to build a powerful, broad-based moral movement.

Second, to be successful, the movement for voting rights and economic justice must help people understand that voter suppression is not just a “Black issue.” In a 1965 speech in Montgomery, Alabama, King explained how the white upper-class “aristocracy” weaponized such suppression to undercut multiracial fusion alliances.

“The threat of the free exercise of the ballot by the Negro and the white masses alike resulted in the establishment of a segregated society,” he said. “They segregated the Negro from everything. That’s what happened when the Negro and white masses of the South threatened to unite and build a great society” that would end poverty and reshape the economic architecture of the nation.

Today, as in the 1960s, racism is clearly driving the attacks on voting rights. But poor and low-income people of all races are harmed by economic hurdles to voting, such as not being able to take time off work or hire a babysitter to be able to stand in long lines at far-flung and under-resourced polling sites. And while people of color are more likely to be poor or low-income, the largest number of Americans in this condition are white.

According to the Brennan Center for Justice, these economic barriers are expanding, with at least twelve states adopting mail-in ballot restrictions and another two passing limits on polling site availability just this year.

Poor and low-income Americans of all races are doubly harmed by a campaign finance system that gives the wealthy excessive power to rig the rules in their favor. Since 2009, just twelve mega-donors have accounted for nearly $1 out every $13 in campaign donations.

The proposed For the People Act, drafted by civil rights champion Representative John Lewis before he died last year, would set strong federal voter protections and ensure access to the ballot, including a mail-in ballot option. It would also help blunt the political effects of our country’s skyrocketing wealth inequality by cracking down on the dark money and super PAC vehicles that deep-pocketed donors use to buy political influence. And it would address unjust gerrymandering.

The House passed this landmark legislation in March, but Senate leaders have dropped the ball, using the excuse of Republican opposition and the refusal of Senator Joe Manchin and some other Democrats to end traditional but unconstitutional filibuster rules. The politically insidious filibuster has always been used to impede racial progress.

Manchin is talking about watering down the bill, while Congress is fixated on infrastructure. Roads and bridges are important, for sure. And President Biden’s plans to ramp up investments in renewable energy and human infrastructure would be momentous, particularly if they are paid for through fair taxes on the rich and by reducing military spending.

But voting rights are the infrastructure of our democracy. Living wages are the infrastructure of our subsistence and our daily lives. This is why the Poor People’s Campaign: A National Call for Moral Revival is standing with white, Black, Latinx, Native, poor, and low-income workers, from the hollers to the hood, to demand an end to the filibuster in order to pass the For the People Act, pass the John R. Lewis Voting Rights Advancement Act, and enact a $15 minimum wage.

As the civil rights leaders of the 1960s so well understood, we cannot secure a bright economic future for all when so many of our people cannot exercise their most basic democratic right because immoral forces still try to deny and abridge the right to vote.

The Reverend Liz Theoharis is director of the Kairos Center and a co-chair of the Poor People’s Campaign: A National Call for Moral Revival.

Rev. Dr. William Barber II is a co-chair of the Poor People’s Campaign: A National Call for Moral Revival.

The Reverend Jesse L. Jackson Sr. is an elder of the civil rights movement and president of the Rainbow PUSH Coalition.

Sarah Anderson directs the Global Economy Project and co-edits Inequality.org at the Institute for Policy Studies.

The Progressive was founded in 1909 to be a voice for peace, social justice, and the common good—but we’re not resting on our laurels.

We don’t rely on the billionaire class to fund the type of hard-hitting journalism we set out to do. Rather, we depend on people like you. Reader support makes up more than half of our budget, Your support allows us to dig deep on the stories that matter most.