When the Israeli General Met the Palestinian Farmer

He reminded us, even if only implicitly, of the minimum the occupation is obliged to do but has never actually done – to see the people under it as human beings. 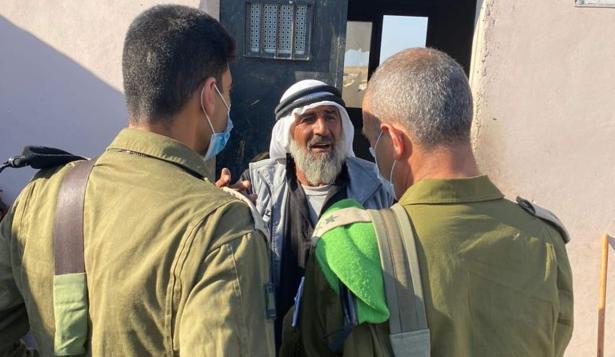 Here’s some good news: The head of the army’s Central Command, Yehuda Fuchs, visited the village where the pogrom took place, Khirbet al-Mufkara.

Granted, the visit was very short, about a quarter of an hour. Granted, every time the residents said the word “settlers” in Arabic, the head of Israel’s Civil Administration for the Hebron area, Salim Saadi, was careful to translate it for the major general as “residents.” And granted, the general parroted the hollow phrase that “the army’s job is to protect the security of all the residents,” even though the army doesn’t do anything of the sort.

Nevertheless, it’s rare for a general to visit Palestinian residents and talk with them – not just in this remote, battered village in the South Hebron Hills, but throughout the  occupied territories. Maj. Gen. Fuchs deserves praise for this hasty visit.

He reminded us, even if only implicitly, of the minimum the occupation is obliged to do but has never actually done – to see the people under it as human beings. Fuchs met Palestinians for a rare moment and saw human beings, perhaps for the first time in his life. Most of his colleagues on the General Staff have never even done that.

Once upon a time, the two peoples still mingled with each other, even if they never did so as equals. Even the Israel Defense Forces knew its subjects. Israeli politicians and officers met Palestinian politicians and fighters. Moshe Dayan, a former chief of staff and defense minister, even met of his own initiative with the poet of devouring Israeli soldiers’ livers, Fadwa Tuqan; Israeli poet Dahlia Ravikovitch met with her as well.

The fact that a general’s visit to a Palestinian village has generated an op-ed is testimony to how incredible such an event is today. It almost never happens.

At that very same moment, a boy named Mohammed Hamamda was lying in Soroka Medical Center in Be’er Sheva after being hit in the head with a rock thrown by the scum from the settlement outposts of Havat Maon and Avigayil. But in reality, it was the IDF that threw those stones. Fuchs’ soldiers stood idly by, as usual, and did nothing to stop the pogrom.

Mohammed lay there all alone. Until Mossi Raz, the MK who fights the occupation, intervened, the IDF wouldn’t even let his parents be with him.

Defense Minister Benny Gantz, who visits every soldier who gets a scratch, didn’t visit this boy. The head of Central Command didn’t visit the other members of the Hamamda family – an elderly couple and the wife’s disabled sister – whom the IDF has denied access to water and electricity. Maybe if Fuchs had met with them as well, the criminal conduct that takes place under his orders would have ended. Or maybe not.

All of these are trivialities that wouldn’t change the reality of the occupation. But without them, not even a trace of humanity remains in this domain of evil. Such steps would have told soldiers that they’re dealing with human beings, at a time when the IDF trains them to think that, actually, Palestinians aren’t human beings.

Everything starts from the top. Israel’s leadership doesn’t recognize the Palestinians. Not at all. Prime Minister Naftali Bennett knows them only from his army unit. Gantz knows them only through his gunsights. Foreign Minister Yair Lapid knows them only as the waiters in the hummus joint or the workers who renovated his house. Almost the first Arabs Lapid ever met were in the corrupt palaces of the Persian Gulf.

He and his colleagues have never met Palestinians and never listened to them. None of them has ever visited a refugee camp or a herding community. They have no idea how the people whose fate they decide actually live or what they look like.

When oppressors don’t bother to meet with the oppressed leadership or its people, the dehumanization process is complete. Cruelty becomes more comfortable, and nothing remains of humanity.

Thanks to this disconnect, halfway decent people like Gantz can tout the Palestinian body count, deprive bereaved relatives of a grave to visit, prevent the parents of a wounded child from being with him, order snipers to shatter demonstrators’ skulls and make elderly people go thirsty in the summer heat.

In Israel, good people do horrific things every day. If they could see the people they are abusing, perhaps they would act a little differently.

Maybe when Maj. Gen. Fuchs met with the farmer also named Mohammed Hamamda at the latter’s home, he was reminded for a moment of his own father. It’s hard to expect more than that from him.

Gideon Levy is a Haaretz columnist and a member of the newspaper's editorial board.  His new book, The Punishment of Gaza, has just been published by Verso Publishing House in London and New York.