What If Pandemic Aid Went to Tenants, Not Landlords?

As landlords refuse federal pandemic rental assistance, some places are simply cutting them out of the process. 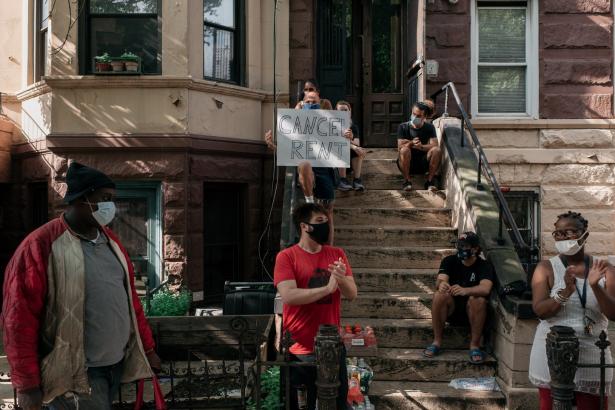 It took Ziaul Hassan, a New York City taxi driver, four months to hear back after he applied for emergency rent help because the pandemic had devastated his business. By the time he received an email last week informing him that his application for New York’s federally funded Emergency Rental Assistance Program had been approved, he owed 12 months of back rent for his apartment in Queens, where he lives with his family of four. His landlord had taken him to court already, in 2020. “I wasn’t scared by the court case, but I was scared for my family. I mean, what would my landlord do if I didn’t pay the rent for a year because I lost my job?” he said.

When Covid-19 hit, Manhattan turned into “a graveyard, not a soul there,” Hassan said. There were no riders for his taxi, and his income shriveled. ERAP, which was launched in January 2021 by the Treasury Department, seemed like a godsend, though Hassan was hesitant to apply because it required landlord participation. Luckily, Chhaya CDC, a Queens nonprofit, stepped in and took care of correspondence with the landlord so Hassan didn’t have to meet him.

Not every tenant applying for federal rent assistance has the support of a community organization. On your own, for many vulnerable renters, calling an ERAP hotline in any state can be exhausting. You’re lucky if you speak English, even luckier if you have a computer, can access the online application and have an email address, and the luckiest if you have the exhaustive list of required documentation at hand—which can be especially tough with a hostile or uncooperative landlord.

With emergency eviction moratoriums ending, many more people are likely to be turning to ERAP, which promised to disburse $46.5 billion to cover for struggling renters. But as of late August, just over $5 billion of that had been distributed. Under ERAP, tenants can get up to $15,000 to pay 12 months of back rent and utility bills for the period starting March 13, 2020, as well as three months of future rent, if they lost work due to the pandemic and meet a certain income-level threshold. As the program stalled, the Treasury Department tried to ease the process by allowing self-attestation of income, in lieu of documents. But landlord cooperation remains one of the biggest problems. Many property owners have refused to accept the money because it comes with paperwork requirements for them and additional tenant protections.

“If the landlord does accept the funds from ERAP, he cannot evict a tenant for 12 months. Another major reason is that they cannot raise rent for another year. Landlords don’t like to be told what to do,” said Jack Newton, director of the Public Benefits Unit at Bronx Legal Services.

The nonprofit partners helping with ERAP in New York are spending a fair number of resources reaching out to landlords, money that could go toward other measures to improve the program, like language help or wider outreach. Mirtha Santana, chief program officer at Riseboro Community Partnership, said that calls to their hotline about ERAP have dropped significantly and fewer tenants are applying. She said Riseboro is now working with a marketing agency to craft messages encouraging landlords to get their tenants to apply and assuage their concerns.

In the face of that recalcitrance, some localities (Washington, D.C., and most of Texas and California, along with a handful of counties in other states) are just giving cash to tenants if the landlord can’t be reached or won’t participate. In Philadelphia, for example, disbursements have been faster with the direct-to-tenant option. Gregory Heller, executive director of the Philadelphia Redevelopment Authority, said that his city used Cares Act funding to give rent money to tenants in the fall of 2020, before ERAP, and “figured out it was much simpler.”

Direct-to-tenant rental assistance doesn’t seem like a radical idea, and it isn’t. In fact, the Treasury Department put out guidance at the end of August explicitly allowing for it. But in many states it tends to be viewed with distrust because of fears that tenants will exploit the system. Emma Foley, a research analyst at the National Low Income Housing Coalition, says these concerns are largely unfounded and stem from a general suspicion around welfare programs that permeates state and local agencies.

“The fear of fraud or misuse makes a lot of state agencies fear that [their] inspector general will pull funds at a later point in time when they’re audited. There’s an apprehension around it,” she said. Foley added that some states believe tenants will feign eligibility requirements without the check provided by the landlord. The variation between states is “not even about how progressive the state is,” she said, citing the example of Texas, “a red state that is actually performing pretty well” in getting the emergency assistance out. “It’s all on the people making the decisions, how experienced they are in housing and welfare, how willing they are to engage with communities, and how much they want people to maintain safe housing.”

“A lot of the ways that we have designed welfare programs are pretty dated,” said Peter Hepburn, assistant professor of sociology at Rutgers University–Newark and a research fellow at the Eviction Lab at Princeton University. “They basically presumed a level of skepticism and mistrust about the motivations and moral character of the poor is bred into it, and a lot of it carried over to the implementation of the ERAP.”

Housing advocates argue that direct-to-tenant assistance and making self-attestation easier wouldn’t just help people pay their rent on time—it might actually help shift views on social welfare among state administrators and the public. That’s been the progressive hope around other broad programs rolled out at the start of the pandemic, like the stimulus payments or the expanded child tax credit, which, while temporary, focused on getting money to large numbers of people quickly, without a lot of worry about how it would be spent.

According to the National Low Income Housing Coalition’s dashboard tracking ERAPs across the country, Hempstead will soon be the first and, for the time being, only town in New York to start accepting applications with a direct-to-tenant option. That leaves most New Yorkers, like Hassan, still stuck dealing with their landlords.

Since his success getting his rent paid off, he’s been pushing his friends and neighbors in Queens to apply for ERAP and tries to talk them through their concerns and fears. But Hassan is stumped by one common question. “They ask me, ‘How will I talk to my landlord? Will they agree?’ I don’t have an answer for them.”

Divya Karthikeyan is a journalist based in Brooklyn.