This book studies how the Communist Party worked in post World War II Detroit, writes reviewer Johnson, "to effectuate social, economic, and political change in the city in this period." 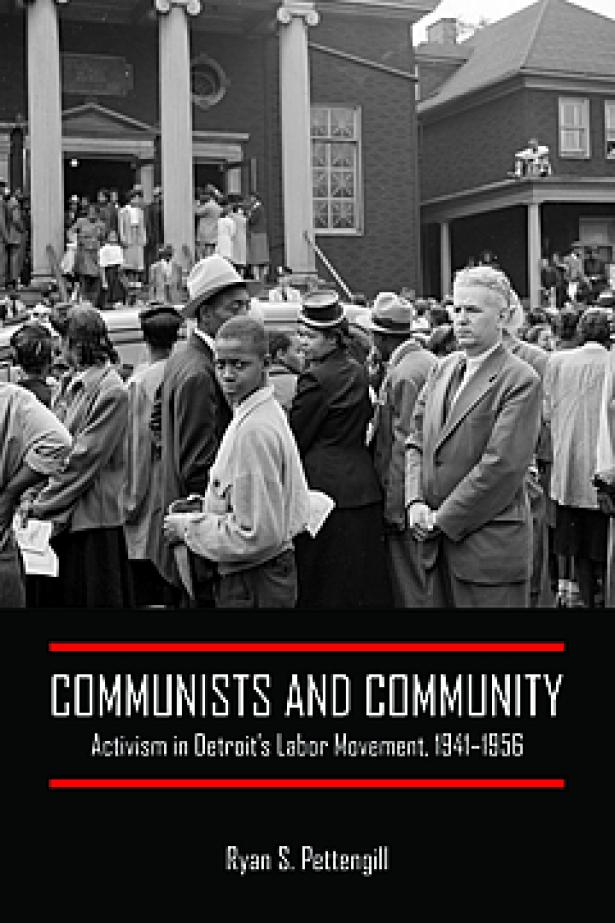 Historian Ryan S. Pettengill’s new book, Communists and Community, is a study of the Communist Party’s activities in Detroit during the early 1940s through 1956. He demonstrates that the party played a critical role in unifying the labor movement and community organizations to effectuate social, economic, and political change in the city in this crucial period. Pettengill argues that the popular front policy of the CPUSA led its members to actively work at bringing unity between labor and community organizations to pressure liberal politicians to fight racism in housing and employment and to better the living conditions of all working-class people in the city.

Overall, he stresses the importance of the linkage of labor rights to civil rights, and how Communist Party members in Detroit played a significant role in realizing this strategic line of organizing. Unfortunately, the Cold War and anti-communism led to the isolation of the party and the resulting breakage of this link, as the labor movement largely moved its focus to “bread and butter” issues—to the near-neglect of broader social issues affecting its working-class membership.

Communist Party members used their dual memberships in unions (primarily the UAW) and community organizations (among them the National Negro Congress, the Civil Rights Federation, and the Citizens Committee) to build broad coalitions capable of pressuring the city and state government to guarantee the rights of working people on the job and in the community. In short, Pettengill’s research demonstrates that the CP interpreted the concept of “class struggle” as encompassing a wider terrain than simply the economic struggle on the job.

He begins by analyzing the struggle over the Sojourner Truth Housing Project (in the early 1940s) as an example. To ease the housing shortage for workers in the growing war industry, the Sojourner Truth Housing Project was planned to accommodate more than 200 African-American families. Although the project was to be built near a predominately white community, it also bordered an African-American community. Racist groups, led by the KKK and other “homeowner” associations, began to press for the development to be white, claiming that an intrusion of African-American residents would ruin their neighborhood. Under this pressure, the city reversed its decision and determined that the housing unit would be dedicated to whites. The CP, organizing through labor unions and community organizations, forced the city to backtrack to its initial decision.

On the day that the new African-American tenants were to move in, they were confronted and attacked by violent racists, who were given cover by local police. At the day’s end, more than 100 African Americans were arrested and dozens hospitalized.

Again, the community coalitions fought for an investigation of the riot, and eventually, the African-American tenants were allowed to move in. Pettengill concludes that “the cooperative organizations had helped reunite the city in the face of a major community crisis and, in many ways, they were in control of the future direction of community relations in Detroit.” (p. 41)

Pettengill goes on to a detailed examination of how these community coalitions functioned during the war—fighting for the raising of living standards of working people, arguing for interracial cooperation, and leading the fight against racism—which were all viewed in the context of national unity in the international struggle against fascism.

With the end of the war came the reaction. The cumulative effect of the House Un-American Activities Committee hearings, the Smith Act trials, and the development of anti-communism as a national religion all aided in isolating the CP from labor and community organizations. Even those sympathetic to the CP were put in the position of having to denounce the organization to save their own job, political position, or legitimacy.

Pettengill even surmises that the Detroit Rebellion of 1967 may have looked different if these community coalitions had maintained their existence. Noting that the absence of these coalitions “left the union on the outside looking in with respect to understanding the crisis involving police harassment, segregation in housing, in addition to institutionalized racism within the shops. With the communists driven from the ranks of the union, little attention was given to the proximate causes of the 1967 riot.” (p. 171)

Pettengill, using a vast array of archival sources, has documented an understudied aspect of U.S. Communist history. Rather than focusing on the CPUSA’s relation to the Soviet party—a favorite topic of historians—he has begun to unearth the everyday activities of rank-and-file Communists. Although these activists adhered to the CP’s general line—which included support for the Soviet Union—their day-to-day activities were focused on improving the lives of working people in the United States. In so doing, they were able to build broad alliances between various ethnic communities and classes, which led to a deepening of democracy.

Although Pettengill ends his examination in the mid-1950s, the stories of Communist activism in the ensuing period, apart from some biographies of individual leaders, has yet to be told in great detail. There, historians will assuredly find that Communist activists continued their community work in the peace and civil rights movements—often not as open Communists and not necessarily openly in the party’s name.

Timothy V. Johnson is the former director of the Tamiment Library and Wagner Labor Archives at New York University.