A Migrant Appears to Have Been Lynched in South Texas

The incident serves as a reminder that over the past two centuries, hundreds of migrants and Texans of Mexican descent have been murdered. 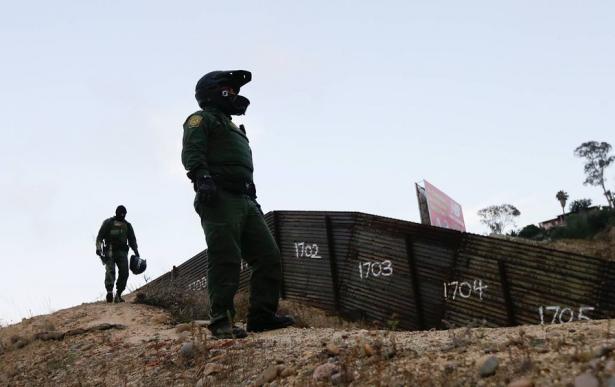 The tragedy, at first, seemed a familiar one in the ragged brushlands of South Texas. Border Patrol agents late last week spotted a badly decomposing body in a patch of trees on a ranch in Brooks County, about an hour north of McAllen and the Mexican border. Nearly one hundred other migrants’ bodies had been discovered in the county this year, but this one was hanging from a noose that had been fashioned from the remains of a shirt and was tied to a limb on a rugged old oak tree. His head lolled to one side, and his feet were missing, perhaps eaten by coyotes or other animals. Some clothing was found folded nearby. So were identification cards for a Mexican male.

Thursday, Brooks County sheriff’s deputies said they had made a positive identification of the body. They have contacted Mexican consular officials, but will not release the name of the man—described as being in his twenties—until family members in Mexico have been notified. Brooks County sheriff’s deputies are treating the case as a homicide investigation, while not ruling out the possibility of suicide, and are hoping witnesses will emerge.

After Breitbart and Newsweek reported on the incident, Joaquin Castro, the congressman from San Antonio, took notice. He tweeted last weekend: “This appears to be a lynching of a Mexican man in South Texas. I will request an FBI investigation if one has not commenced.” Castro, who appears to be the only high-profile official to acknowledge the incident thus far, also called for politicians to stop using rhetoric describing migrants as “invading” the country. This year, Governor Greg Abbott and Lieutenant Governor Dan Patrick have framed the arrival of thousands of migrants from Central America and Mexico in exactly that way—as an invasion.

As law enforcement determines exactly what happened to the man found dangling from the tree, echoes of the past are sounding again. Given the imprecision of reporting over time, and the intentional whitewashing of history, it’s impossible to know the exact number of lynchings that have taken place in Texas, but they have occurred since the days of the Republic of Texas. Some historians estimate there have been over seven hundred lynchings in the state—and perhaps countless more—with hundreds targeting Mexicans or Texans of Mexican heritage.

A century ago, when migrants were seeking safety from the violent uncertainties of the revolution in Mexico, they were sometimes met by mobs armed with chains, ropes, and guns. They were tortured and beaten all along the border. Often, anyone with a “foreign” name, U.S. citizen or not, was in danger of being singled out. Many of the attacks followed heated statements from public officials that Texas was going to be overrun by desperate migrants surging across the river, and that the intruders were going to be bringing a host of plagues—crime, disease, poverty, and even socialism. It was rhetoric similar to that of Patrick, who told Fox News host Laura Ingraham in mid-September that allowing migrants into the U.S. constituted “a silent revolution by the Democrat Party and [President] Joe Biden to take over the country.”

In 1910, a posse hunted down a migrant vaquero named Antonio Rodriguez, accusing him of shooting a rancher at her home in Rocksprings, 140 miles west of San Antonio. He was put in a local jail that was swarmed by a mob that tortured him and set him on fire. Governor Thomas Campbell neglected to act, at first, until he received marching orders from Washington to launch investigations and keep Mexican officials in Texas safe. A year after Rodriguez was lynched, a group of white men came for Antonio Gómez, a fourteen-year-old from a migrant family in Milam County, seventy miles northeast of Austin. Within three hours of being accused of murdering a local man, he was abducted, dragged by a chain, and strung up on a ladder leaning against a telephone pole.

The killings of Rodriguez and Gómez signaled the dawn of what some historians call the “Hora de Sangre,” or the Hour of Blood: a period, spanning into the 1920s, when hundreds of migrants and others of Mexican ethnicity were brutalized or killed. In a one-year span, from 1915 to 1916, three hundred Mexicans and Mexican Americans were murdered in Texas, some researchers estimate.

The scalding language from politicians in the period no doubt stoked anti-migrant sentiments, which helped to serve their careers.  In 1919, Congressman Claude Benton Hudspeth of El Paso said there were “bandits” waiting to cross the border and that “you have got to kill those Mexicans when you find them.” Congressman John Box of Jacksonville went to the House floor in 1928 to talk about the “illiterate, unclean, peonized masses moving this way from Mexico” who must “be stopped at the border” because of their “unsanitary habits” and “vices.” John Nance Garner, Franklin Delano Roosevelt’s vice president and arguably the most influential Texas politician of the early twentieth century, spoke of Mexican migrants as inferior to U.S. citizens.

As the violence against migrants spread, state officials implicitly excused it, and sometimes endorsed it. In 1918, Texas Rangers accused fifteen Texans of Mexican heritage—including two boys—of raiding a ranch. The Rangers lined them up and shot them in Porvenir, a small border community 170 miles southeast of El Paso. The executions conducted by state police were set against the backdrop of the roiling upheavals in Mexico, and the belief that bloody revolution was going to be spilling across the border. Reports sent to Austin by the Rangers and local ranchers suggested that those murdered in Porvenir were “thieves, informers, spies, and murderers” and that justice had been served.

Of course, migrants were not the only Texans lynched. In 1893, Henry Smith, a Black handyman, was set on fire in Paris, in northeast Texas, after being accused of attacking a white child. The nightmarish incident unfolded before a howling crowd of several thousand, some of whom scrambled for souvenirs—pieces of the dead man’s clothing that hadn’t been reduced to ash. The incident made national headlines, with reporting led by crusading journalist Ida Wells, and is credited with helping to awaken America to the scourge of racially motivated mob violence.

Such killings have become less common, of course, but they persist. In 1998, a Black vacuum-cleaner salesman named James Byrd was shackled by white supremacists to a pickup truck and dragged for three miles down a bumpy lane in Jasper County, in southeast Texas—until his head was severed. His executioners continued down the road to a Black church and then tossed Byrd’s mangled torso in front of it.

Past governors often responded only belatedly to condemn lynchings, while others did little to tamp down the fears and hysteria that might fuel unofficial executions of Mexican Americans, migrants, and Black Texans. In 1916, Governor Jim Ferguson did little to assail or even truly examine the Waco lynching of teenaged farmhand Jesse Washington. After Byrd was lynched in 1998, activists clamored for Governor George W. Bush to support legislation that would impose tougher penalties for hate crimes. Bush demurred, saying that Texas was already willing to hand out stiff penalties. State lawmakers later passed the James Byrd Jr. Hate Crimes Act and then-governor Rick Perry signed it in 2001. Eight years later, Barack Obama signed a similar national act.

For months now, state leaders have doubled down on demonizing the latest surge of migrants. “Carnage is being caused by the people coming across the border,” Abbott said in June. “Homes are being invaded. Neighborhoods are dangerous, and people are being threatened on a daily basis with guns.” This rhetoric may play well with a significant slice of Republican primary voters. But it also risks incitement and, through the state’s history, it has had deadly consequences.

For almost half a century, Texas Monthly has chronicled life in the Lone Star State, exploring its politics and personalities, barbecue and business, true crime and tacos, honky-tonks and hiking. We hope you enjoy the archive of classic Texas Monthly stories on this site, as well as the half dozen new ones we add every day.

If you’re new to Texas Monthly, we hope you’ll like what you see and want more. We offer several easy and affordable ways to subscribe.