“The unprecedented and unjustified seizure of Professor Wilson’s entire collection of books, letters, computers, research and lectures, openly violated state law, CUNY’s own policies and the US Constitution” 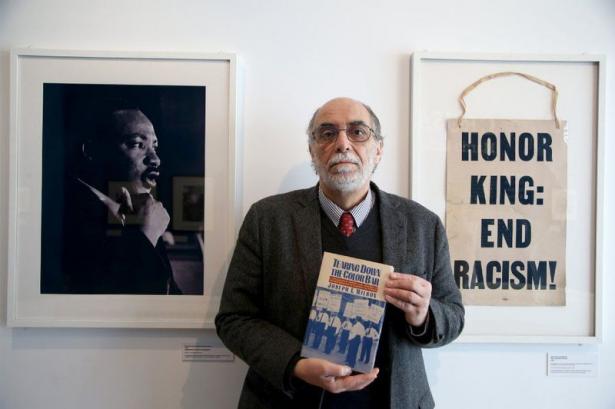 Professor Joseph Wilson has filed a $2 million dollar suit against CUNY, claiming it wrongfully terminated him and discarded his collection of African-American research, worth over $12 million dollars, in the process,Photo: Luiz C. Ribeiro for New York Daily News

New York Attorney General Letitia James is to be commended for her fearless pursuit of Donald Trump in a “criminal capacity”  and for her office’s investigation of sexual misconduct allegations made against Governor Cuomo. Additionally, AG James’ support for racial justice and the Black Lives Matter movement is particularly noteworthy.

However, the AG’s representation of her client, the City University of New York, in Dr. Joseph Wilson V. New York State et al, is deeply troubling legally, ethically and morally.

The unprecedented and unjustified seizure of Professor Wilson’s entire collection of books, letters, computers,  research and lectures, openly violated state law, CUNY’s own policies and the US Constitution, as documented by Dr. Wilson’s legal team. The University has failed to provide an accounting of Dr. Wilson’s seized intellectual property and archival materials, as a matter of court record.

CUNY administrators failed to obtain a search warrant, or catalog what they seized. Dr. Wilson’s research was literally trashed based on photographic evidence and eyewitness accounts. CUNY never created a legally required chain of custody of Dr. Wilson’s property. His life’s work is unaccounted for and was lost, stolen or destroyed.

By way of background:  in 2015, William Thompson CUNYs  Board of Trustees chair, then newly appointed by Governor Cuomo, invited New York’s Inspector General to review the conduct of Brooklyn College President Karen Gould and to asses the investigative procedures used by CUNYs Office of General Counsel.

In 2016 the IG issued  an Interim Report, finding CUNY’s OGC investigative and administrative actions violated state law. The IG’s Report resulted in the resignation of 2 college presidents and CUNY’s General Counsel Schaffer, for, among other reasons cited by the IG,  financial improprieties and illegally failing to properly engage the IG in investigations of CUNY’s faculty or staff. CUNY failed to engage the IG in its investigation of of the rumors regarding Professor Wilson. In an unprecedented, unethical break with the university’s “no comment “ policy during an ongoing investigation, CUNY contemptuously defamed Dr. Wilson in a planted New York Times article, while simultaneously withholding exculpatory evidence.

The federal court’s mandated discovery revealed that CUNY withheld critically important exculpatory evidence for over 7 years, including Dr. Wilson’s Worker Education Director’s Appointment Letter, concealed in the General Counsel’s office, authorizing the very duties he was charged with during his fraudulently conducted and obviously unethical arbitration, resulting in his termination.

Full disclosure: I have known Dr. Wilson and have admired his voluminous publications on race and Black workers for decades. I am intimately familiar with this case and offered to testify on his behalf. However, Assistant Attorney General Mark Klien blocked my testimony. I am also personally familiar with racially related academic disrespect and mendacity.

Shockingly, the AAG made racially insensitive remarks including asking Dr. Wilson, who is African American, if he was  a “gangster”, while angrily tossing a large stack of papers at him during his deposition. In court, the AAG called world renowned African American scholars , distinguished professors Gerald Horne and Robin Kelley “so called experts”. The AAG permitted, without sanction, CUNY’s intimidation and threats against the Africana Studies department chair in supporting Dr. Wilson’s claims, according to sworn deposition testimony.

While the nation is rightly riveted by racial injustice and in healthcare and in the criminal injustice system, we must not lose sight of insults and injuries in the academy, especially regarding the under representation and the disrespectful treatment of African American faculty.

The recent UNC tenure rejection of Nikole Hannah Jones,  award winning journalist, scholar and leader of the New York Times 1619 Project, has created a First Amendment case that deserves the national spotlight. Both the Jones and Wilson constitutional cases are endemic of undervalued and disrespected Black faculty elevated to a national moral issue resonating far beyond the university systems.

AG James inherited this case from her predecessor and may not be  fully aware of her office's transgressions. Nevertheless the buck now stops at AG James regarding illegal, unethical actions and coverups by her CUNY client, under the guise of sovereign immunity used to shield bad state actors.

As national attention and outrage grows, Wilson V. New York must be expeditiously and fairly resolved in the name of racial justice and academic equity. AG James must reverse her office’s current indefensible approach that is tantamount to an assault on academic freedom, profoundly undermining a spectrum of academic rights, particularly concerning undervalued African American faculty who precariously grasp positions in universities across the nation.

He has written 20 books and has edited 13. He is best known for his classics, Race Matters and Democracy Matters, and for his memoir, Brother West: Living and Loving Out Loud. His most recent book, Black Prophetic Fire, offers an unflinching look at nineteenth and twentieth-century African American leaders and their visionary legacies.]