The Biden administration was supposed be different from its predecessor. So why are Haitians are being denied their due process in seeking asylum to the U.S.? 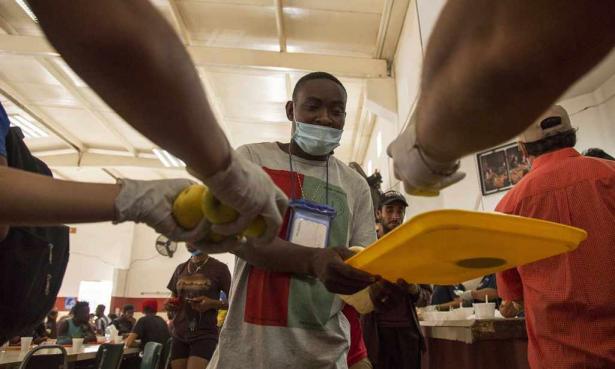 A Haitian migrant receives food at a shelter where he awaits for his immigration resolution in Monterrey, Mexico, on September 27, 2021., Julio Cesar Aguilar/Getty Images

Horrifying images of U.S. Border Patrol agents on horseback chasing Haitian asylum seekers in the waters of the Rio Grande captured the world’s attention in late September. The clash took place near a border area in Texas between the United States and Mexico where thousands of Haitian migrants and their families had taken refuge under a bridge, having arrived there after transiting through multiple countries. When some of the migrants began crossing the Rio Grande into Del Rio, Texas, border agents violently discouraged them, using their long horse reins as whips and invoking historical comparisons to slave patrols.

“All of us are appalled by the images showing the mistreatment of Haitian refugees at the southern border and the continuation of a callous deportation policy,” D.C. Attorney General Karl Racine, who is a Haitian immigrant, said. He cited the “serious challenges” facing Haiti today as a reason why people are fleeing, including “devastating earthquakes and hurricanes, political upheaval and dangerous gangs and violent crime.”

After the border photos came to light President Joe Biden denounced the violence saying, “it was horrible,” and adding, “I promise you, those people will pay. There will be an investigation underway now and there will be consequences.”

Still, the Biden administration, using a Trump-era policy—Title 42—went on to expel thousands of Haitians before they had an opportunity to present their cases for asylum.

According to Karen Musalo, an asylum law expert, “Both international and U.S. law recognize the basic human right to seek asylum.” In an article in The Conversation, she writes, “It is entirely legal to approach U.S. borders and request asylum.” Yet Haitians are being denied this right under the Trump rule.

The U.S. has long had discriminatory immigration policies toward Haitians going back to the 1980s when Cubans, fleeing their country, were embraced at the same time that Haitians were intercepted at sea and sent back. Similar policies continued through the 1990s when the Republican administration of George H. W. Bush and the Democratic administration of Bill Clinton detained Haitians in Guantanamo Bay, years before that very site became infamous for imprisoning suspects linked to the 9/11 attacks.

The Biden administration, despite its promises to the contrary, has used enforcement of Title 42 to continue the Trump administration’s anti-immigrant policies, and specifically the U.S.’s historic anti-Haitian trend.

“President Biden has hidden behind the excuse of using the pandemic to deport people without giving them their due process,” says Janvieve Williams Comrie, executive director of AfroResistance. Williams Comrie referred to the promise that Biden made on the day he was inaugurated as President to “pursue a comprehensive approach to advancing equity for all, including people of color,” and points out that, “this is not the way to do it.”

The Black Alliance for Just Immigration concurred. On September 22, BAJI released a statement aimed at Biden that reads, “Your commitment to racial equity must extend to the treatment of immigrants.” The group also released a list of demands for the federal government that included asking for Title 42 to be revoked and for Haitians to be granted humanitarian parole while their asylum claims are processed.

So controversial is the use of Title 42 against Haitians that at least two high level U.S. government officials have resigned in protest. Daniel Foote, the U.S. special envoy to Haiti said in his resignation letter that he did not want to be, “associated with the United States inhumane, counterproductive decision to deport thousands of Haitian refugees.” More recently Harold Koh, a senior State Department official also resigned saying in an internal memo that the government’s policy was “inhumane,” and “not worthy of this Administration that I so strongly support.”

Yet the Biden administration claims its hands are tied, citing the Centers for Disease Control and Prevention’s position that Title 42 is necessary in order to prevent the risk of increased transmission of COVID-19 into the U.S. via asylum seekers. The administration went as far as legally defending the Trump-era rule and won a favorable ruling in a federal appeals court to continue applying it.

Lee Gelernt of the American Civil Liberties Union, who challenged the rule in court said, “If the Biden administration really wants to treat asylum-seekers humanely, it should end this lawless policy now and withdraw its appeal.”

Williams Comrie says the Biden administration could treat Haitian asylum seekers the same way others are treated. For example, refugees from Afghanistan fleeing the newly resurgent Taliban regime, are not being subjected to the same strict COVID-19 related public-health standards that Haitians are. There are about 64,000 newly settled Afghans in the United States right now and the Biden administration is planning to resettle 95,000 more next year.

The thousands of Haitians gathered at the U.S.-Mexico border near Texas face dangers just as serious as Afghans. Many traveled through various Latin American countries before arriving at the border and facing violence and expulsion at the hands of Border Patrol agents. “The Haitian migrants that we see today have not been migrating from just Haiti,” says Williams Comrie. “This is a migration that is coming from as far down as Brazil and Chile and not just from 2021 but from as early as 2010.”

Many families have children who were born in the Latin American countries they were transiting through before arriving at the border of the U.S. and Williams Comrie explains that they now face a very “hostile” environment in those nations as well.

Aside from groups like AfroResistance, Haitian Bridge Alliance, and Black Alliance for Just Immigration, few immigrant rights groups explicitly advocate for the rights of Haitians. Williams Comrie, dismayed at this, asks, “Why is this not an issue?” She maintains that, “Haiti is such an important country and Haitians are such a large part of the migrating community that more organizations should be advocating for them.”

In the absence of humane federal policies for Haitians, some individuals have organized mutual aid efforts to assist the asylum seekers at the Texas border, bringing truck-loads of supplies. World Central Kitchen, a nonprofit organizing food aid for disaster victims, has supplied hot meals to thousands of people. But such efforts are piecemeal and not nearly enough to address the need.

The plight of Haitians seeking asylum is ultimately a racial justice issue, according to Williams Comrie, who asks, “Why are some human beings more deserving of rights than other human beings?”

Sonali Kolhatkar is currently the racial justice editor at YES! Media and a writing fellow with Independent Media Institute. She was previously a weekly columnist for Truthdig.com. She is also the host and creator of Rising Up with Sonali, a nationally syndicated television and radio program airing on Free Speech TV and dozens of independent and community radio stations