The Biden American Family Plan, and its early child care and education provisions, would be a lifeline for working-class families struggling in today’s unequal economy.  It’s high time for the United States to make good on its family-first rhetoric 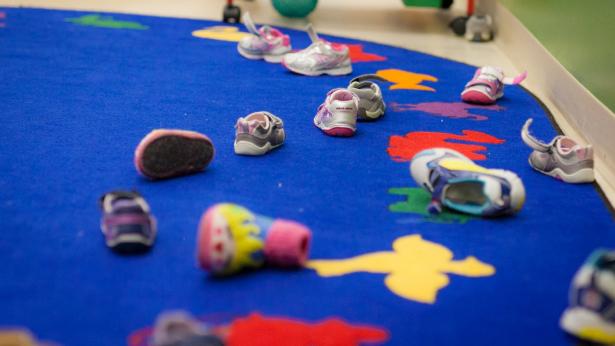 In Netflix’s must-see new series, Maid, Alex (Margaret Qualley) flees a violent boyfriend with her two-year-old in tow, only to discover the gordian knot of being an impoverished, unhoused, single mom. Affordable child care is at the knot’s center.  Alex must have a pay stub to qualify for subsidized housing, but first she must have child care to earn that paycheck. While she scrubs wealthy people’s floors, Alex depends on babysitting from her mentally unstable mother (played by Qualley’s real-life mom, Andie McDowell).  She eventually finds a subpar daycare that accepts her government voucher, but when her daughter gets sick from their mold-infested subsidized apartment, Alex must stay home and forfeit the paycheck.  Maid, based on a memoir by Stephanie Land, brilliantly illustrates how America’s entire social contract is stacked against working-class parents, especially mothers, and how affordable quality child care is an essential fix.

The Biden Administration’s proposed American Family Plan would be a game changer for parents like Alex who struggle to find a safe place for their babies and young children while they work.  Families who earn up to one and a half times their state’s median income would pay no more than seven percent of their income for child care, and the most impoverished would earn free care.  It also would make preschool universal for all three and four-year olds while also raising the pay and training level for preschool educators.

America’s current level of child care support is laughable compared to that of other industrialized nations.  Rich countries pay on average $14,000 a year to support a toddler’s care; the U.S. pays just $500.  Though this country’s public education system for grades K – 12 set a global standard, the U.S. has long neglected care for children in the years before kindergarten.  How did the U.S. fall so far behind the rest of the world in early child care?  In part, our failure to care for our youngest children is a function of our weird, privatized social welfare system, much of which is provided by employers, like health care.  Most employers never stepped up to fill the child care gap in the social contract, and our government never mandated that they do so.  Why not?

A conservative, anti-feminist movement gutted the prospect for universal child care in the 1970s, just as women were entering the paid workforce en masse. Many women had a transformative vision for how they would balance work and family, according to Kirsten Swinth in Feminism’s Forgotten Fight. Feminists waged a host of legal and policy fights to force business and government to share the costs of family labor.  Universal, community-controlled child care was a fundamental tenet of their movement. The National Organization of Women was a strong supporter of the Comprehensive Child Development Act of 1971, which would have created a federally-funded national day care system.  The burgeoning New Right opposed the bill as a new entitlement that would take women out of the home, and they found a vocal supporter in Richard Nixon’s speechwriter, Pat Buchanan. Nixon vetoed the legislation, saying that it would “commit the vast moral authority of the National Government to the side of communal approaches to child-rearing” rather than keeping child care within the family.  Two subsequent attempts to pass similar bills in the late 1970s never got off the ground in the face of such sustained opposition.

Right-wing discomfort with working mothers is once again at the heart of opposition to Biden’s child care plan, and that may keep America as the global laggard in early childhood care.   Republican Senatorial hopeful JD Vance opposes federal expansion of day care, arguing that children should be at home in family care.  Though Vance doesn’t say this, who typically provides that family care he touts? Women, of course.  In two-parent households, women remain the most likely to adjust their careers to accommodate the family. Meanwhile, 80 percent of single-parent households are headed by women, and a full thirty-five percent of those mother-led families live in poverty.  When conservatives like Vance oppose subsidized child care, they block women from gaining independence and economic self-sufficiency.

The pandemic revealed that child care is a lynchpin in the economy.  When working mothers left the workforce in droves, especially the women of color who held many of the frontline, essential jobs, many cited a lack of child care as a major reason. Seen in this light, the nation’s “labor shortage” is, in part, a direct result of the child care shortage that we have refused to tackle for more than 40 years.

Senator Joe Manchin, one of the most vocal Democrats opposed to Biden’s plan, has reportedly called for progressive Democrats to lower their sights and reduce the proposal’s provisions.  He wants them to choose between child care, paid family medical leave, and an expanded child tax credit.  But child care can’t be plucked apart from paid leave and income boosters, as Maid makes clear. In order to escape an abusive relationship and thrive, Alex, needs all these policies, plus affordable housing, supplemental nutrition, and free college.

The Biden American Family Plan, and its early child care and education provisions, would be a lifeline for working-class families struggling in today’s unequal economy.  It’s high time for the United States to make good on its family-first rhetoric and join the rest of the industrialized world in supporting busy working families who are bringing up babies.

Lane Windham is the Associate Director of the Kalmanovitz Initiative for Labor and the Working Poor at Georgetown University and author of Knocking on Labor’s Door: Union Organizing in the 1970s and the Roots of a New Economic Divide.