labor The Revenge of the Essential Worker

Striking John Deere workers watch salaried employees don hard hats, as if the uniform is all it takes to do an essential job. 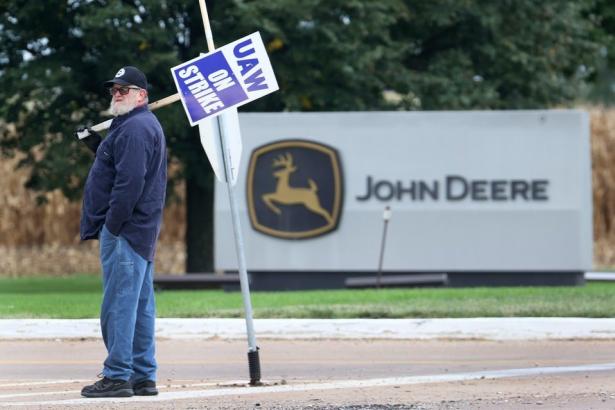 Of all the images coming out of the current strike wave—the motorcycle club joining the Kellogg’s picket line, New York City taxi drivers shutting down the Brooklyn Bridge—the apparent chaos at the John Deere plants is among the most viscerally satisfying. Last week, more than 10,000 workers across 14 plants went on strike after rejecting the tractor maker’s contract offer, an offer that included a 4 percent increase in pay the year after its CEO made $15.6 million himself. To keep its business running, the company told The Washington Post, it “activated a continuity plan,” which sounded reasonable until it became clear that the plan took salaried office workers, gave them punchy new titles like “tractor driver” and “general repair,” and put them on the shop floor.

Jonah Furman, a reporter for Labor Notes, has been diligently collecting quotes from the white-collar workers who have been hastily trained and are now reportedly working 12-hour shifts, six days a week. “I can guarantee that with our lack of skill and numbers, we will not be breaking the strike,” one told Furman. “If, God forbid, this strike goes on long enough for the next build cycle of combines to start … it will be a horror show,” another said. “All of the skilled welders, machinists, and assemblers who normally make these half-million-dollar machines will be gone.”

Leaving aside the cruel logic of forcing the company’s nonunion workers into potentially dangerous situations to maximize profit, the moment is a pure and satisfying embodiment of a conviction that every person laboring under a boss has had: Management can’t do a worker’s job. It’s a point that continues to be made as the people who formerly manned desks attempt to do highly specialized and skilled labor. On the first day of the strike, a salaried worker crashed a tractor inside one plant. The situation has gone somewhat viral, bringing to mind an army of scabs from the accounting department playing like toddlers in a sandbox.

By some estimates, over 100,000 workers are currently on strike or have recently voted to strike. They include 38,000 Kaiser Permanente health workers, 1,400 Kellogg’s plant workers, and thousands of nurses in Massachusetts and New York. Over the weekend, 60,000 members of the film and television union IATSE narrowly avoided a strike in a last-minute deal, though by some accounts many of those workers didn’t think the contract negotiations went nearly far enough.

The strikers join the 30 million workers who have quit their jobs this year, in what has been termed the Great Resignation but could more accurately be described as the Great Reassessment of Work. One explanation for this seismic shift is that workers simply have more leverage as employers struggle to retain them, particularly in low-wage, customer-facing jobs. Another might be that the people who worked through the pandemic are experiencing that vague but suddenly omnipresent condition of burnout. But the pandemic also magnified the lines between professional classes, where one group of workers spent the last year and a half Zooming in sweatpants as another trundled off to do “essential” and dangerous work, often for significantly lower pay. As the striking John Deere workers’ slogan goes: “Deemed essential in 2020, prove it in 2021. Can’t build it from home.” Which makes it all the more satisfying to watch their salaried counterparts being forced to don hard hats by upper management, as if the uniform is all it takes to do an essential job.

The sometimes confounding lines drawn around essential and nonessential workers during the pandemic revealed a particularly harsh truth about labor in the United States. Over the course of a few months, low-paying jobs, historically justified by saying the wages were consistent with low-skill labor, were valorized by politicians and described as heroic by people who were still able to get groceries or buy tractors or go to the emergency room when they were sick. The food and agricultural workers who make up one-fifth of essential industries have a median hourly wage of $13.12; for “critical manufacturing” that wage is $18.32. For health care it is $20.05, which, assuming a 40-hour workweek, translates into a little over $41,000 a year. Never mind the terror of being on the “front lines” of what was so often framed as a war against a deadly disease, a battle fought so as many white-collar workers as possible could stay home. The unprecedented number of Americans asking more from their bosses is likely just as much about this reframing of their work as essential as it is about employee scarcity. Perhaps people who have been incessantly referred to as heroes are now demanding they be treated as, in fact, invaluable. Or maybe they’ve rejected the cynical logic that gave them platitudes and honorariums in the place of dignity and an appropriate wage.