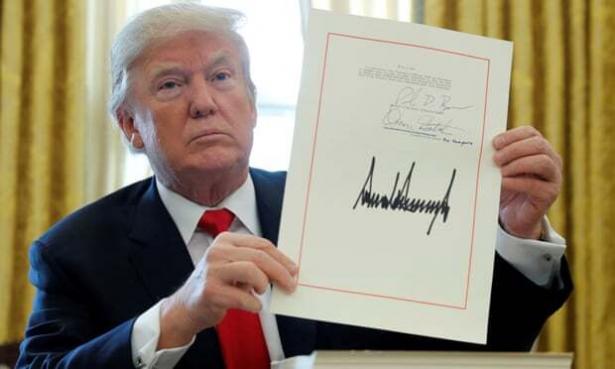 Trump displays signature after signing tax bill into law at the White House in 2017. ,Jonathan Ernst/Reuters

Documents and recordings obtained by the Guardian shed new light on a powerful and secretive rightwing network and the influence it was able to exert on Trump administration policies favoring the super-rich.

The recordings include speeches given to the Council for National Policy (CNP) by conservative media stars including Dennis Prager, emerging Republican power players such as Charlie Kirk, and close economic advisers to Donald Trump.

Some of the previously published recordings appear to no longer be publicly available.

The Guardian’s independently sourced recordings offer an insight into how conservative economic thinkers – from bodies representing the interests of some of the richest individuals in the country – were able to exert influence on the supposed populist Trump.

In particular, a panel discussion at CNP’s February 2019 meeting suggests that Trump decided one of his most far-reaching economic policies on very limited evidence – on the basis of a personal conversation.

The panel involved Bill Walton, president of CNP; the Washington Times columnist and former member of the Cayman Islands Monetary Authority Richard Rahn; Jonathan Williams, chief economist at the American Legislative Exchange Council (Alec); and Stephen Moore, a one-time Trump nominee for the Federal Reserve board, whose nomination was withdrawn following revelations in the Guardian that he had failed to pay his ex-wife hundreds of thousands of dollars in alimony.

The panelists offered a favorable assessment of the Trump administration’s economic performance, but also used the platform to claim credit for pushing the administration in the direction of radical free-market policies.

Moore claimed that he, together with Larry Kudlow, Trump’s director of the National Economic Council from 2018, had persuaded the thenpresident to offer unprecedented corporate tax cuts.

He described a meeting with Trump where they argued that the US’s corporate tax rate, relative to those among certain Asian and European competitors, was effectively a penalty on US companies, stating: “Look, you know, we’re at 40% – they are 20%. This is a big problem.”

Moore said that they explained these tax differences using charts, “because Donald Trump likes to look at pictures, he doesn’t like to read”.

According to Moore: “Trump looked at this and he said: ‘No, I don’t want to do that,’” instead proposing “not 20%. I want 15%,” with the number coming back to an effective 20% rate only after Senate negotiations.

The cuts have been blamed for widening inequality, and worsening deficits, with a large amount of the savings going to stock buybacks, according to business reporters and economists. The Congressional Research Service pointed out that any positive effects, like wage or GDP growth, were transient, and had petered out by the end of the quarter in which the cuts were put into effect.

This reveals the power of the CNP, a little known body whose members are deeply secretive about their meetings. CNP attendees’ access to this picture of the inner workings of the Trump administration, and the players who helped set its course, is the result of adherence to a strict code of silence.

In introducing the panel, the CNP conference director,Mary Margaret Hathaway, enjoined participants to secrecy, reminding them to “not record any speaker remarks”.

Hathaway continued: “CNP meetings are off-limits to the press. So please be aware of who you’re talking to.”

She added, “Don’t grant any interviews and if you run into a reporter asking questions about the event, please let a member of the CNP staff or leadership team know.”

Despite her warnings, the organization itself made the recordings obtained by the Guardian, and uploaded them on their website in a manner that made them accessible to any internet user.

Other recordings obtained by the Guardian include talks at 2018 and 2019 meetings by senior Republicans including Senator Tom Cotton and the US congressman Steve Scalise; and former governors including Scott Walker and Sam Brownback.

The CNP was founded in 1981 by influential Christian-right activists, including Tim LaHaye, Howard Phillips and Paul Weyrich, who were also involved in founding and leading the Moral Majority.

Initially, they were seeking to maximize their influence on the new Reagan administration. In subsequent years, CNP meetings played host to presidential aspirants like George W Bush in 1999 and Mitt Romney in 2007, and sitting presidents including Donald Trump in 2020.

The Guardian previously reported on a leak of the group’s 2020 membership list.