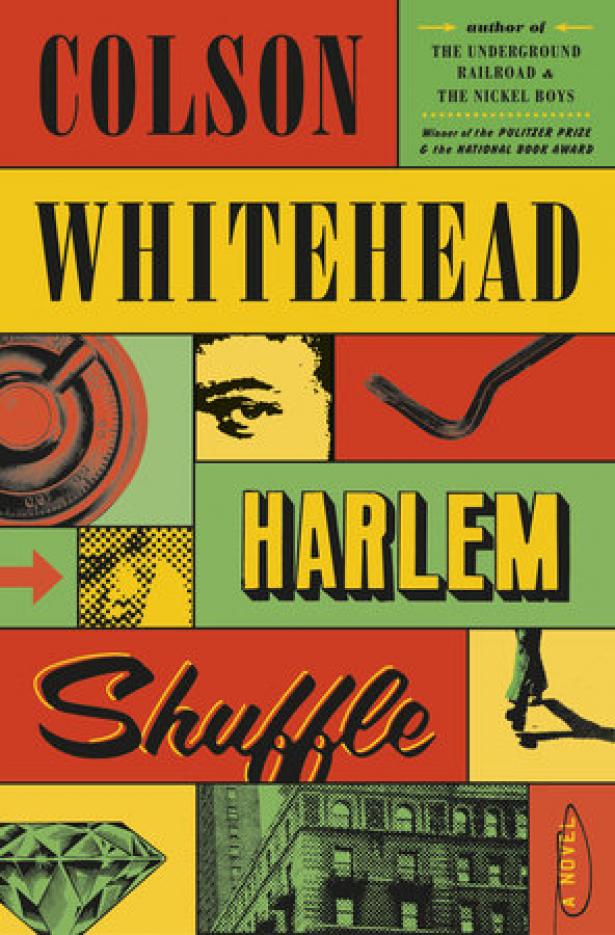 AS THE CIVIL RIGHTS MOVEMENT took center stage in newspapers and magazines across the United States, the people of Harlem were, among many things, dealing with a rat problem. The vermin were biting children and contaminating pantries, but they were also a striking symptom of a larger issue: Harlem was facing a housing crisis. Though public housing had been erected, it was both scarce and disgusting. The exuberance that characterized the Harlem Renaissance of the 1920s seemed to be in decline as economic insecurity, inadequate sanitation, dreadful landlords, and neglected public space tarnished the neighborhood’s grandeur. As James Baldwin would put it in his 1960 essay “Fifth Avenue, Uptown,” while those living in public housing would build solidarity out of a feeling of being left behind, “those who do own anything are more interested in their profits than their fellows.”

Colson Whitehead sets his first crime novel, Harlem Shuffle, within this milieu. Ray Carney, the proprietor of a furniture store on 125th Street, must decide whether he will join his cousin in a plot to rob a local hotel. Business has been slow, Carney wants to get out of the small apartment he and has family have been occupying, and the scheme to rob safe-deposit boxes at the “Waldorf of Harlem,” the Hotel Theresa, presents a stark choice: “Striver versus crook. Strivers grasped for something better—maybe it existed, maybe it didn’t—and crooks schemed about how to manipulate the present system.” Though Carney really only has one option in this instance—his cousin has already given his name to the heist’s masterminds—the existential dilemma about his natural disposition has preoccupied him for most of his life. The son of a crooked man, the husband of a woman who comes from strivers, Ray Carney seesaws between these two identities until he finally makes the call that in a city run by baddies, it pays to be bent.

The novel is broken into three sections, each of which takes place in a key year of the civil rights movement—1959, 1961, and 1964. The first section recounts the hotel burglary and Carney’s slide from petty indiscretions—like not asking questions when valuables magically show up in his shop—to harboring fugitives and getting rid of bodies. The second details how Carney draws on this prior scheming experience as he plots revenge against a senior member of a private Black social club who takes a bribe and doesn’t deliver the goods. The final act brings all of Carney’s past connivances to the point of personal crisis as Harlem revolts in response to the murder of James Powell, a Black teenager shot by the police.

For those who have only read Whitehead’s most recent work, the texture of his latest novel may feel somewhat peculiar. Neither the intense violence nor the grim tenor of his last two novels—the Pulitzer Prize–winning duo of The Underground Railroad (2016) and The Nickel Boys (2019)—have a strong presence in Harlem Shuffle. There is violence and grimness, to be sure, but they are undercut here by the drollness and irony that is emblematic of Whitehead’s earlier works, qualities that he could not readily avail himself of in his two previous books’ representations of enslavement and the institutional abuse of children. There’s an unmistakable wryness to much of the dialogue, whether Whitehead is conveying the prattle of condescending Black elites (“If you remember the story of the Count of Monte Cristo—and I realize it’s been a long time since some of you were in school”), or the matter-of-fact pronouncements of robber barons who grew up in Miami with penchants for purple suits (“I’m descended from African people—I need to be in the sun”). James Powell’s death takes up a few rather artless sentences, reflecting the prosaicness of such a tragic event in contrast to the prodigiousness of the neighborhood’s response.

Whitehead’s love for New York, which he has also methodically catalogued in his early collection of essays on the city’s spirit and dramatic personae, The Colossus of New York: A City in Thirteen Parts (2003), remains romantic. Though Harlem is not mentioned by name in that volume, it is undeniable that Whitehead’s deep affection takes the “A” train uptown. The prose glistens most dazzlingly as Carney peregrinates around the neighborhood, a conglomeration of “men drinking beer on aluminum folding chairs, clacking dominoes, and then blocks of cratered emptiness, rowdy night spots next to tenements torched for insurance money.” The conviviality of Harlem, brimming with life and sin of all kinds, produces characters who are almost too human—that is, complex and contradictory in the most mundane but familiar ways.

If crime novels of the early- and mid-twentieth century often provided a glimpse inside the psychology of the criminal, Harlem Shuffle evinces how such a psychology could come into vogue. By presenting a story in which illegal acts are simultaneously a spectacular and a routine occurrence, Harlem Shuffle engages in the political project sketched out by predecessors like Chester Himes’s The Real Cool Killers (1959) or even Richard Wright’s Native Son (1940), though in an orthogonal manner that seems counterintuitive at first. The scholar Theodore Martin has argued that “midcentury politicians framed crime as a pathology peculiar to African Americans.” Academia confirmed such notions with influential reports on race relations like Swedish economist Gunnar Myrdal’s An American Dilemma (1944), which broadly argued that Black culture “is a distorted development, or a pathological condition, of the general American culture.” This included a “seriously high criminality” that Myrdal suggested is only exacerbated by law-enforcement officers, who police Black neighborhoods more heavily under such a theory of inherent Black delinquency.

As Black people endeavored to gain equal rights against these political and scholarly narratives, authors like Himes and Wright had two distinct approaches to narrativizing the link between Blackness and the law: show how the racist social order railroaded (usually) Black men, or depict (usually) Black men as being on the side of justice, as police officers or detectives. Their effectiveness aside, these strategies end up ceding much ground to “law and order” as a natural organizing principle of a society that supposedly has the potential to be perfectly colorblind after racism. Harlem Shuffle refuses this capitulation by showing that crookedness is part and parcel of how capitalism functions. By making the novel’s protagonist a self-described entrepreneur who unyieldingly rails against the lawless behavior he so regularly partakes in, Whitehead reveals how structural racism, interpersonal anti-Blackness, and the fantasy of the American dream co-conspire under capitalism, undermining Black community by atomizing success into an individual aspiration and achievement rather than a collective possibility.

In the third act, the civil rights movement finally reaches a fever pitch that Carney can no longer ignore. With his various legitimate and illicit businesses, Carney is caught between the crooks and the capitalists. He is a pillar of his community, a cliché that Whitehead turns into a useful metaphor: “He was a wall between the criminal world and the straight world, necessary, bearing the load.” Carrying that weight is how Carney survives, even as his criminal world slowly seeps into his straight one. But he also wants more: to live in a more remarkable building among the fabulous people.

By 1964, even this quite limited outlook on what it means to be part of a community dissipates as Harlem erupts in riots. After Carney and his family move to Riverside Drive, he experiences a heightened desire to move ever more upward to Strivers’ Row. Meanwhile, the window-smashing protesters imperil his livelihood, and the goalposts for what it means to be a Harlemite shift. Potential clientele and new neighbors transform into potential thieves and irksome agitators. Carney can only contemplate the uprising as a threat to his business until he realizes they could make for catchy advertising slogans: “After a long day of fighting the Man, why not put your feet up—on a new Collins-Hathaway ottoman. Presenting the new Collins-Hathaway Three-Point Recliner—finally a sit-In we can all agree on!” Carney’s politics are green, not Black. If racism and police brutality never go out of style, these phenomena can at least be used for personal gain.

It’s difficult to predict, however, what such a strategy will yield long-term. Though we leave Carney at the end of this novel much in the same way that we found him—namely, dreaming of bigger and better apartments during an excursion through the city—a lot happens between 1959 and 1964. The World’s Fair breezes into town, presenting the future as a slick wonderland of Googie architecture and Picturephones. If Carney doesn’t even possess the technological know-how to work a camera for a family portrait (and he doesn’t), the dynamism of the Big Apple threatens to leave the small-time hustler in its dust.

In the opening essay of The Colossus of New York, Whitehead describes the city as one of palimpsests: “This place multiplies when you’re not looking.” The city never sleeps because it is haunted by the ghosts of New York’s past. In the twenty-first century, we are haunted by the New York of Harlem Shuffle, one that is often placated by individual success rather than racial uplift. Now, as Black capitalism is offered up yet again as a viable antiracist political strategy, the life of Ray Carney recalls Baldwin’s insistence that such a politics, which mistakes Black wealth-building for Black liberation, isolates Black people from the community that sustains them. To rely on the Carneys of the world, who are only about the right now, is to see the promises of the civil rights movement—the social, economic, and political freedom for all Black people in the United States—continue to be unfulfilled.

Omari Weekes is an assistant professor at Willamette University.