Right-Wing Vehicle Ramming Attacks on Protesters Spreads, Thanks to Green Light by Authorities

A Boston Globe survey found many drivers who had injured people were either not charged, or never faced a felony charge. 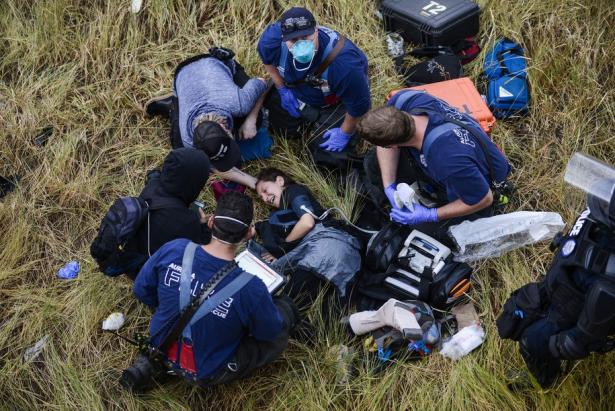 Paramedics tend to a woman who jumped off the side of the highway to avoid a car speeding through a crowd of protestors marching on I-225 to protest the death of Elijah McClain on July 25, 2020, in Aurora, Colorado., Getty Images

American police forces, while claiming to be neutral protectors of public safety and civil rights, have been green-lighting right-wing attacks on leftist protesters for a long time now, most notably during the anti-police brutality protests of 2020. One of the more insidious ways that this has been occurring has been through vehicle-ramming attacks, in which angry right-wing drivers have plowed through crowds of protesters, maiming dozens.

Even more disturbing is that police, prosecutors, and legislators have been anything but neutral in handling this violence. A Boston Globe investigation published this week found 139 cases of such attacks between late May 2020 and Sept. 30 of this year, injuring at least 100 protesters and killing three of them. But the drivers faced charges in only 65 of those incidents, with only 34 of those being felonies; the others only faced misdemeanors or minor traffic violation charges.

Georgia State University professor Mia Bloom, who specializes in global terrorism studies, told the Globe that convictions for serious crimes in these attacks appear to be occurring at a low rate.

“When we’re looking at a tactic,” Bloom said, “you take your car and you plow it into civilians on purpose, in order to terrify them for a political purpose, what’s the difference between plowing your car and planting a bomb?”

A number of the incidents, the report notes, are not clear-cut cases of intentional assault, such as when drivers have proceeded slowly through the crowds and have been surrounded by protesters, and their vehicles have been attacked. However, in other cases, as domestic terrorism expert Mary McCord of the Georgetown Institute for Constitutional Advocacy and Protection told the Globe, “the driver is intending to intimidate and coerce people from exercising their First Amendment rights. That’s just another way that protests have become more dangerous.”

The survey, moreover, found many drivers who had injured people but never faced a felony charge. On the contrary, police and prosecutors often charged the protester who was hit for disorderly conduct or jaywalking, rather than the driver. Often, a simple claim of self-defense was all that was needed. “In many cases,” the report said, “police and prosecutors simply accepted drivers’ explanations that they were not attempting to instill terror in pedestrian protesters but rather felt terror themselves.”

In Visalia, California, an open-topped Jeep flying an American flag and what appeared to be a Trump flag hit two protesters on May 30, 2020 during an encounter caught on video in which water bottles were thrown at the car. The local prosecutor said the driver was acting out of fear for his safety and did not charge him. In Gainesville, Florida, prosecutors dropped six counts of aggravated assault against a man who drove through a protest on that same day, saying the state’s Stand Your Ground law, which allows someone in a confrontation to defend themselves in their own residence without any duty to retreat, had come into play.

For researchers such as Roudabeh Kishi—director of research and innovation at the Armed Conflict Location and Event Data (ACLED) project, from which the Globe study drew its data—the use of vehicles to attack demonstrators rather than terrorism targets is an entirely American development.

“It’s quite unique seeing people using cars as a weapon to suppress demonstrators,” Kishi said. “Most incidents that we’ve seen have all been targeting peaceful protesters … It’s really going against the narrative that these types of incidents are self-defense.” 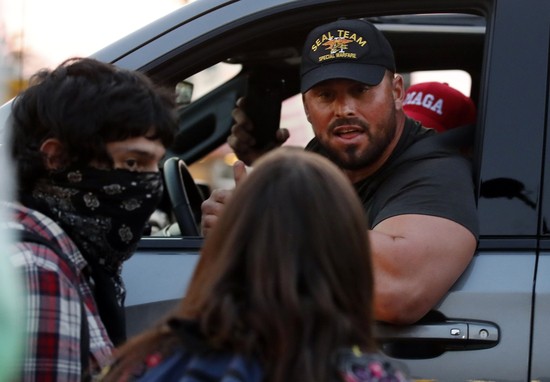 Many of the confrontations that are occurring at protests, such as this one in Salt Lake City in August 2020, are occurring in both a politicized and racially charged context. AFP via Getty Images

Because they mainly have occurred in the context of protests against racist behavior by police, there is a powerful racial component to these incidents. When the race of the driver is known, they are four times as likely to be white than a person of color. In a number of the incidents, witnesses describe drivers using racial slurs or shouting such phrases as “all lives matter” during the attack. At least one driver in Virginia who drove his truck into a Black Lives Matter protest was a Ku Klux Klan member; he was charged with a hate crime.

“You’re going to have people coming in and expressing themselves with two tons of metal on wheels,” Brian Michael Jenkins, director of the National Transportation Security Center, told the Globe. “That’s part of the landscape now.”

The tactic of attacking protesters with vehicles has enjoyed a great deal of currency on far-right social media, originally in the form of widely shared memes. These memes first gained attention in the darker fringes of the internet—particularly alt-right channels on platforms such as 4chan, 8chan, and Reddit—but have been showing up with increasing frequency on platforms like Facebook and Twitter. And they have already played a role in creating fatalities: Charlottesville vehicle killer James Alex Fields shared such a meme shortly before killing protester Heather Heyer with his car in August 2017.

The language is consistently cruel and inhumane: “Run ’em all over” and “Get the protester plow,” are popular lines; one of the favorites is “All Lives Splatter.” Another meme claims to show the “new Dodge Ram Protester Edition” with a custom paint job replicating blood across the truck’s front end.

Popular right-wing figures have gotten into the act. YouTube pundit Steven Crowder recently tweeted: “Charge or block a vehicle and break the windshield with the driver still in it? Congratulations! You are now a speed bump!”

The widespread endorsement of the tactic by conservative Republicans has grown to include passing legislation giving wide legal latitude to anyone using their vehicle to assault protesters when they use public roadways. GOP-controlled legislatures in Florida and Oklahoma each passed legislation that not only outlaws broadly defined “riots,” but provides immunity to people who drive their vehicles into a protest crowd. Other Republican legislatures in a number of states are lining up to do the same.

The Florida bill—signed into law by Republican Gov. Ron DeSantis—forbids anyone from occupying streets in the course of a protest (which can be any gathering of three or more people), and then gives immunity to drivers who ram their cars into protesting crowds in those streets and injure or kill anyone participating. Anyone who participates in a protest that becomes violent can be charged with a third-degree felony.

In at least one case, the kid-glove treatment by police later led to an escalation of the use of a Trump supporter’s pickup to assault political opponents. In September 2020, Eliazar Cisneros of San Antonio, Texas, drove his large black truck, waving a large Trump flag, into a crowd of Black Lives Matter protesters, but did not injure anyone because he drove slowly. Nonetheless, he cursed at protesters as he drove into their midst, and they responded in kind. He claimed he was driving aimlessly, "waving my flags and showing support for my president.”

"I didn't want to hurt anybody," Cisneros said. "You know, get off the street, get on the sidewalk and protest whatever you are protesting on the sidewalk. Stay safe."

Police did not charge Cisneros. One month later, however, he was among the most aggressive drivers in a large “Trump Train” that attacked a Biden/Harris campaign as it drove from San Antonio to Austin. The pickup truck he drove in both incidents was the vehicle that deliberately collided with an SUV driven by a Biden staffer accompanying the bus; as a result, he is one of five people involved in the incident being sued by people who were aboard the bus.

Many of the drivers believe the protesters deserve to be assaulted. When James Hunton, 24, struck a woman with his truck in Bowling Green, Kentucky, on May 29, he told police: “The protesters were in the road … They deserved to be hit, anybody would.” After first being charged with a felony, Hunton pleaded his case down to a misdemeanor and was sentenced to probation.

Police are among the people who often share that belief. In Seattle, at least two officers have come under fire for expressing support for vehicular assaults on protesters. One, a King County detective named Mike Brown, shared an “all lives splatter” meme on his Facebook page, and later posted: “I see a couple of people got infected with Covid-19 from the hood of a car on I-5 last night.” Brown was fired. 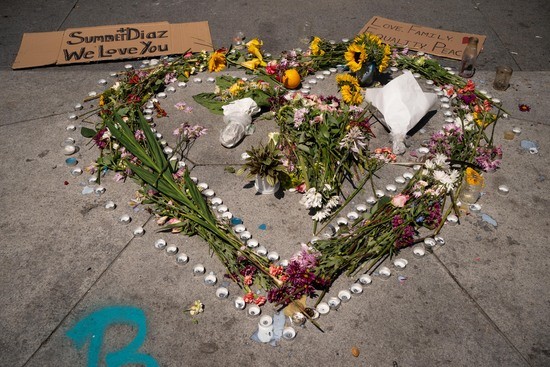 An onsite memorial to Summer Diaz in Seattle at the location where a driver ran into protesters during a freeway protest in July 2020, killing him.  Getty Images

A Seattle police officer named Andrei Constantin is currently under investigation after local activists revealed his identity on Twitter, posting as “Bruce Wayne” under the now-deleted @1SteelerFanatic account, which regularly wished violence on local protesters, including his apparent support for Dawit Kelete, the man who drove into protesters on a closed-off freeway in July 2020, killing one person and severely injuring several others.

Constantin frequently promoted the “#FreeDawitKelete” hashtag. Replying to a fundraiser for the person who was killed in the incident, he tweeted: “Do you have the go fund me for #FreeDawitKelete?” Chastised for his tweets, he replied: “Nah, play stupid games, win stupid prizes.” Other tweets expressed open hostility to Black victims of police brutality, including one that read: “#GeorgeFloyd got justice regardless of what your definition of ‘justice’ is.”

The end result of the spread of this threatening tactic—and its green-lighting by civic authorities—has been devastating for protesters faced with lethal force for exercising their First Amendment rights. One of the Black Lives Matter activists who endured Cisneros’ assault in September 2020—writing on Twitter as “Nat”—reflected on the trend afterward, noting that he had already endured an earlier vehicle-ramming attack in Rhode Island.

“At the time, the event made national news,” he wrote. “Now, as we’ve seen, this car-ramming tactic has become standard for both the cops and the right. It often doesn’t even make news or it’s only on the local level. I know many others … have talked about this dynamic too.

“It’s scary to see this normalized,” he continued. “Even more scary to me is how blank I feel after again being in a car-rammed protest. I’m sad and scared for my friends and others in the march, but I don’t feel shock. It’s fucked how normal this violence has (had to) become to me and to us all.”