Asian American Sisters in the Movement for Racial Liberation

A look back at inter-racial solidarity between Black Americans and Asian Americans, from Nobuko Miyamoto in “Not Yo’ Butterfly.” 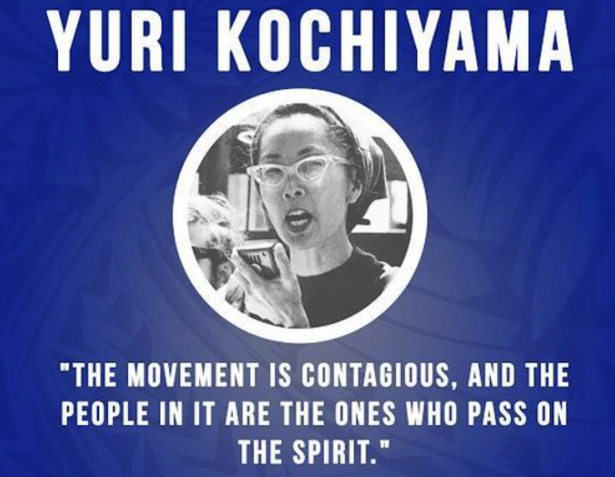 From internment camp to Broadway to activism, Nobuko Miyamoto steered her life toward creativity and liberation. In this excerpt from her memoir, Not Yo’ Butterfly (forthcoming, University of California Press, 2021), she describes how working on films about the Black Panthers and the Young Lords in the late 1960s led her to Yuri Kochiyama and a sanctuary for inter-racial solidarity.

A tap on my shoulder pulled me from the dance of words. I turned to see a petite middle-aged woman who looked Japanese. What was she doing here? A pair of winged 1950s glasses straddled her nose, a bandanna wrapped her hair, and a yellow No. 2 pencil perched on her ear. She could have been one of my LA nisei aunties, but there was something different about her. She wasn’t as well-fed, and her clothing proclaimed function, not fashion. She had leaflets tucked under her arm and a small notebook in her hand. Was she a reporter? Her face was open with surprise. Maybe she’s wondering what I’m doing here too; we are the only yellow dots swimming in this roiling sea of color.

Passing by, a beautiful Puerto Rican woman with a bountiful Afro shouted, “Sister Mary! Good to see you here.”

“Esperanza! This is great, isn’t it! So many people.” Hmmm, this Sister Mary person seemed totally at home here.

Her attention returned and she started directing questions at me like she’d found a rare specimen and was trying to pinpoint it. “What’s your name? Are you sansei? Where are you from? What camp were your folks in?” For Japanese Americans, these are shortcut codes that tell a lot about us. Family name: maybe we’re long-lost cousins? She guessed I was sansei, third generation. There weren’t many yonsei, fourth generations, around in those days. If you were nisei and from the West Coast, your issei parents came from Japan, and probably had something to do with farming or railroads. You were in camp as a teen, trying to prove you were American. If you were an older sansei like me, your folks were born here, and you could well have been a baby in camp and definitely don’t speak Japanese, also thanks to trying to prove you’re American. Younger sansei might have been born after camp. What camp? Camp is a thread that strings us together, a marker in our DNA. Though our families spoke little about those dark days, some remembered their block and barrack number in the giant maze that barb-wired their lives. Having been in Manzanar, say, or Gila River was like being from the same village, with distinct geographies and experiences. Tule Lake? Ah, someone in your family was a community leader or considered dangerous, a trouble-maker. Camp was more familiar than our Japan roots, which most of us had never seen. So Mary’s shortcut questions spoke volumes. JoAnne Miyamoto— sansei—Los Angeles—Santa Anita Park racetrack . . . Montana . . . Utah— Los Angeles. Hers was: Mary Nakahara Kochiyama—nisei—San Pedro— Jerome, Arkansas—Harlem.

I’d never met anyone who’d been in Jerome. While incarcerated there, she volunteered in the USO Canteen, where she met her husband, Bill Kochiyama, one of the 33,000 nisei guys who enlisted in the Army to prove their allegiance to the United States. Bill was part of the 442nd battalion, which had earned more Purple Hearts and casualties than any other in the U.S. Army. After the war, Bill and Mary came to New York, where he’d been born. While many nisei struggled to escape the Black and Mexican ghettos to which they were confined postwar, Bill and Mary chose to live in the Harlem projects. They raised their six children there, became active in the community, and even sent their kids to “Freedom Schools.” (What was that like?) Bill worked for an ad agency downtown, while Mary waited tables at Thomforde’s coffee shop on 125th Street (ah, that explains the bandanna and pencil), a meeting place for Black activists and a convenient way for her to be involved in their conversations and concerns.

Somehow Mary and Bill made the leap from the injustices of Japanese American concentration camps and landed in the middle of the civil rights and Black Power movements. Mary became a friend and follower of Malcolm X. Like many Blacks who traded their slave name for a name that reflected their African roots, she traded Mary for her Japanese name, Yuri. Yuri was in the audience the day Malcolm got shot at the Audubon Ballroom in Harlem. She ran onstage and protected him with her body. Yuri was no ordinary Japanese woman. Yuri was no ordinary human being.

“Do you know any Asian groups in New York?” she asked.

“Not really. I used to know people when I worked here in Flower Drum Song”—I was embarrassed mentioning my former life in this context—“but that was a long time ago.”

“Wow, you were in Flower Drum Song? Did you ever do The King and I? My kids were in that show!” She laughed. “Probably every Asian child in New York worked in The King and I.”

I couldn’t imagine her as a “backstage mom,” but as I came to know Yuri, soon nothing would surprise me. “I’m just here temporarily from LA, helping to make this film about the Black Panthers.”

“Gee whiz, you have to come to our meeting of Asian Americans for Action! They’ll want to hear about this.” She pulled out a leaflet. “We’re planning this demo for Asians to unite against the war.” Then she whipped her pencil from its perch and wrote the address and time of the meeting on the back of the leaflet. Her handwriting was remarkable. Japanese Americans are known for their cool styles of writing. Hers was bold, decisive. She also wrote her phone number, “WA 6–7412.” To this day I remember it, as does every Black political prisoner she visited and talked to on the phone. I think it should be retired, like the number on Jackie Robinson’s baseball uniform. “And you have to come to my house for dinner!” I didn’t know that that was the invitation my life had been waiting for.

The years 1968 and 1969 were a period of transition, and not only for me. The whole world was going through a shake-up. You were either clinging to the old familiar or pushing toward the new unknown. The way the Panthers put it, you were either part of the problem or part of the solution. I wanted to be part of the solution, but I was unsure how. I was crossing a bridge from one world into another. There was no safety net, no map. It was an abrupt departure from everything I’d known and desired.

Once you see people who are living for their beliefs, not their careers; once you understand that your actions, no matter how small, can help stop a war, or nourish children, or expose police brutality; once you see communities coming alive to stand up for their rights, it’s like catching a fever that tells you that you are alive. What you do matters, it makes a difference, it can change the world. There was no turning back. Were my conviction and courage as deep as those of the Panthers or the Young Lords? Yuri was the first Japanese American I’d met on this path. Were there others like her?

Yuri and Bill Kochiyama’s Harlem apartment, in the projects at 545 West 126th Street, was a mecca for the movement. … Apartment 3C was not like any home I’d ever been to. It was no quiet retreat from busy New York life. It was a meeting house, a guesthouse, a drop-in center, a family hostel where you might find Black and Puerto Rican comrades, acquaintances, and strangers from anywhere in the world passing through, to eat and rest their heads for a night or two, or sometimes weeks. It was beyond comprehension how the Kochiyamas and their six children plus guests managed to live in that compact four-bedroom, one-bathroom apartment. Before long, 3C became my second home. (Later, after I moved back to LA and visited her in New York, I was among those who slept on the utilitarian postmodern couch and on every one of her children’s beds.) When you entered, the living room on the right had an ironing board that doubled as a reception table. There sat a phone and a nine-by-twelve notebook that kept a log of every visitor, every phone call, with names and meticulous notes of every conversation in her cool handwriting.

To me, apartment 3C was a movement sanctuary, a place you went to touch truth. I loved sitting in its altar of a kitchen, table layered with leaflets for upcoming rallies and walls postered with images of political prisoners—FREE THE PANTHER 21!, FREE RUCHELL MAGEE, STOP THE WAR IN VIETNAM, CHIMURENGA, ATTICA.

3C was a place of possibilities and responsibilities. You had to pay attention to all the injustices in this world. But we weren’t going to change them alone. 3C was a crossroads between folks in the Asian, Black, and Puerto Rican movements, and we had a lot to learn from one another. Yuri set a high bar to be an activist. When she, as a Japanese American mother of six, walked into that East Harlem Church to support free breakfasts for Puerto Rican children, she was saying we all could do it. We all could do something to make a better world.