Puerto Rico Is Facing Down Another Undemocratic, Austerity-Obsessed Bankruptcy Deal

Financial vultures are pushing a new round of bankruptcy and austerity in Puerto Rico. Puerto Ricans themselves, meanwhile, continue to fight for pensions, basic services, and a democratic say in their lives that has been denied them so long. 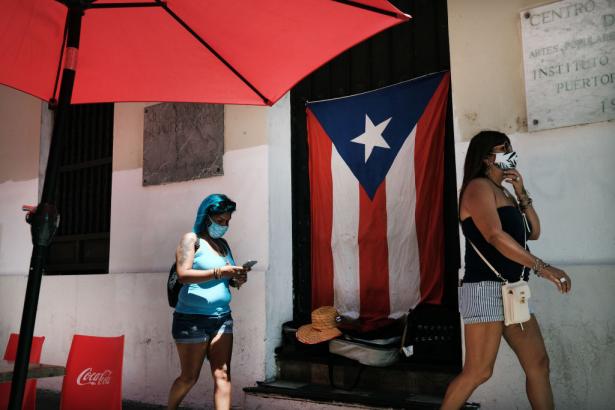 In the near future, a federal judge in New York will decide whether to approve a debt restructuring deal that will have major consequences for Puerto Rico’s people. ,(Spencer Platt / Getty Images)

A federal judge in New York will soon be ruling on the largest local government bankruptcy in US history — not of any city in New York, but of the Commonwealth of Puerto Rico.

The judge will decide whether to approve a debt restructuring deal that will have major consequences for Puerto Rico’s people and economy over the next several decades. It is a deal reached by holders of Puerto Rican debt and the Financial Oversight and Management Board, a congressionally created fiscal control board with the power to negotiate on behalf of Puerto Rico’s government.

The deal restructures more than $30 billion of the $73 billion in outstanding debt that the island had incurred as of 2015, when a former governor officially declared the island unable to pay its debts. (Some of the original debt has already been restructured, and other chunks, including the debt of the Puerto Rico Electric Power Authority, are currently being negotiated). “Restructuring” here means that the old debt will be retired, and a smaller amount of new debt will be issued to replace it, to be paid back over the next thirty years.

But the question that has been largely swept under the rug — except, of course, among Puerto Ricans — is, how much can the people of Puerto Rico actually afford to pay?

The Board’s consultants have even said, in the context of restructuring the power authority’s debt, that “any recovery” by bondholders needs to be “secondary to the Commonwealth’s overall economic recovery.” And according to the Financial Oversight and Management Board itself, if Puerto Rico does not pay any debt service for the next fifteen years — if the existing debt were wiped out entirely — the central government would still find itself without enough revenues to cover expenses by 2036.

In other words, another bankruptcy in the making. Yet wiping out the existing debt is far from what the Board is now arguing for, so the next bankruptcy will almost certainly come sooner than 2036.

At the same time, the Board, to which Congress has granted broad powers to dictate budgets and government spending, continues to push austerity on the island, driving the further exodus of the working-age population and reducing Puerto Ricans’ ability to spend in support of the local economy.

On an island where the median household income is $20,000 and 72 percent of government pensioners have pensions of less than $1,500 per month, the Board has aggressively sought to cut pensions, weaken labor unions, and reduce benefits — while supporting tax incentives allowing wealthy Americans to use the island as a tax haven.

As a case in point, the Board’s signature initiative to “transform” the island’s aging and bankrupt power system via privatization decimated Puerto Rico’s oldest independent labor union, displaced more than three thousand workers and has resulted in even worse electrical service for the island. And by bringing in an American-Canadian consortium with a strong interest in subcontracting its affiliate companies, the Board has all but assured that billions of dollars of federally funded grid reconstruction work will flow to off-island companies and contractors.

The Board has shown no interest in strategies to keep wealth in Puerto Rico, strengthen the working class, and stem the flow of out-migration — all of which would be needed to put the island on a path toward long-term financial stability.

The Puerto Rico legislature recently passed (by one vote) a law that authorizes the government to issue the new debt that will be required if Judge Laura Taylor Swain approves this debt restructuring agreement. The law includes yet another massive cut to the University of Puerto Rico (UPR), the island’s flagship university system which has already suffered many years of cuts — to the point where there is a real fear that the university system could lose its accreditation.

Specifically, the law authorizes an annual government funding of $500 million for the UPR for the next five years — a cut of nearly 25 percent from just three years ago and of nearly 40 percent relative to a decade ago. Students have mobilized, with thousands of students voting in hybrid in-person and online assemblies to go on strike.

At the same time, the debt restructuring agreement also restructures the pension plans for teachers, judges, and other public employees by eliminating cost of living adjustments and switching from “defined benefit” to “defined contribution” plans — pension cuts by another name.

If island residents — and particularly pensioners and students — are losing with this bond deal, who is benefitting? The list is long and includes bond insurers and certain classes of bondholders, including hedge funds that bought up cheap Puerto Rican debt and will be paid back at a higher rate.

The debt restructuring process has also been a gravy train for a large array of lawyers, consultants, and financial advisors, some of whom are being paid more than $1,000 an hour. Professional fees related to debt restructuring will run to well over $1 billion, paid for by the people of Puerto Rico. Some of the beneficiaries are the very same legal advisors and consultants who collected exorbitant fees helping Puerto Rico get heavily into debt in the first place.

For example, one of the Board’s lead law firms, O’Neill & Borges (where the current governor of Puerto Rico worked before his election), was also one of the lead underwriters’ counsels for the Puerto Rico Government Development Bank in the years leading up to the bankruptcy. And Citigroup, after underwriting 20 percent of all outstanding Puerto Rican government debt, is now a lead financial advisor to the Board. This creates a real conflict in that these advisors may have an interest in making sure that the Board does not take a close look at the legality of past Puerto Rico debt issuances that they themselves were involved in.

The Board’s contract with Citi gives the firm a financial incentive to close debt deals, and that incentive is proportional to the size of the restructured bonds. In other words, Citi is incentivized to support debt deals that are as large as possible. For these firms, a second Puerto Rico bankruptcy will simply mean the opportunity for more fees.

In the bigger picture, the bankruptcy of Puerto Rico’s government has pushed the colonial relationship with the United States to the forefront. There is no pretense of democratic accountability between the people of Puerto Rico and the Board, and a case critical to the well-being and future of millions of Puerto Ricans is being decided by a federal judge in New York. Thus far, Congress has turned a blind eye to the dealings of the Board it created and its complete lack of success in fulfilling its mission of restoring Puerto Rico to financial health.

But at the end of the day, one thing is certain: debts that cannot be paid will not be paid. The people of Puerto Rico have taken history into their own hands before, most recently in the summer of 2019 when mass protests forced the resignation of former governor Ricardo Rosselló. And this latest round of struggle has radicalized thousands more young Puerto Ricans. The future of the island has yet to be written.

Cathy Kunkel is an energy and finance analyst based in San Juan, Puerto Rico.