The media equation between “woke” and anything vaguely in the realm of social justice allows the right to paint moderate liberal ideas as fringe—an East Coast and California counterculture that is woefully out of step with straight white America. 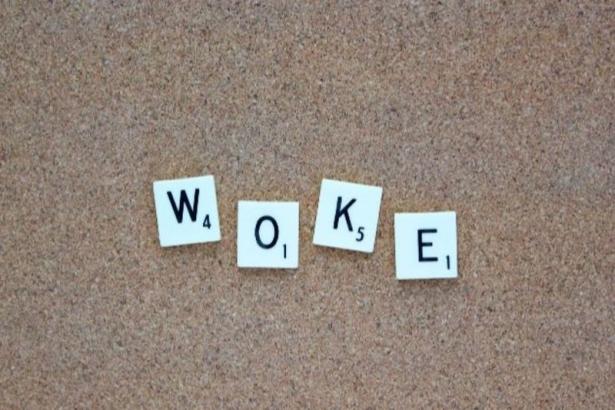 “Woke” is the label the aggrieved conservative suburbanite puts on the indignity of having to call their Starbucks barista “they” and finding Ibram X. Kendi on their child’s school reading list. But as the Democrats prepare for the midterm election cycle, anti-wokeness has become a key theme about the party’s future. Woke activists have been chief culprits in Terry McAuliffe’s loss in the Virginia governor’s race, correspondents tell us, and the electoral ground loss generally by the Democrats (The Hill, 11/7/21).

The meaning of this ubiquitous term often shifts with context. Originating in Black vernacular English, according to Merriam-Webster, to “stay woke” means to question “the dominant paradigm,” and to carry awareness of racial and other forms of oppression. The phrase became a Black Lives Matter call to action in the Ferguson uprising of 2014, but as that revolutionary spirit ebbed, “wokeness” has become a stand-in for what the right once decried as “political correctness” (Extra!, 5–6/91). 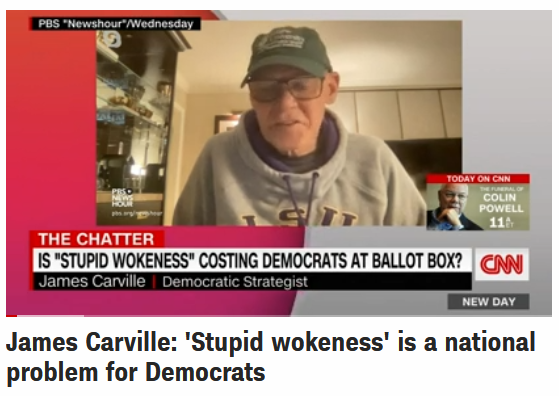 CNN‘s Chris Cillizza (11/4/21) (11/4/21) said of James Carville’s anti-woke tirade, “After Tuesday, Democrats should bring Carville in and listen to every word he says.”

It’s a buzzword that can indict liberals as the speech police, or denounce anything from diversity initiatives (Newsweek, 10/15/21), criticisms of aggressive policing in Black communities (Fox News, 8/7/21) and LGBTQ complaints about Dave Chappelle’s Netflix comedy special (New York Daily News, 10/28/21). 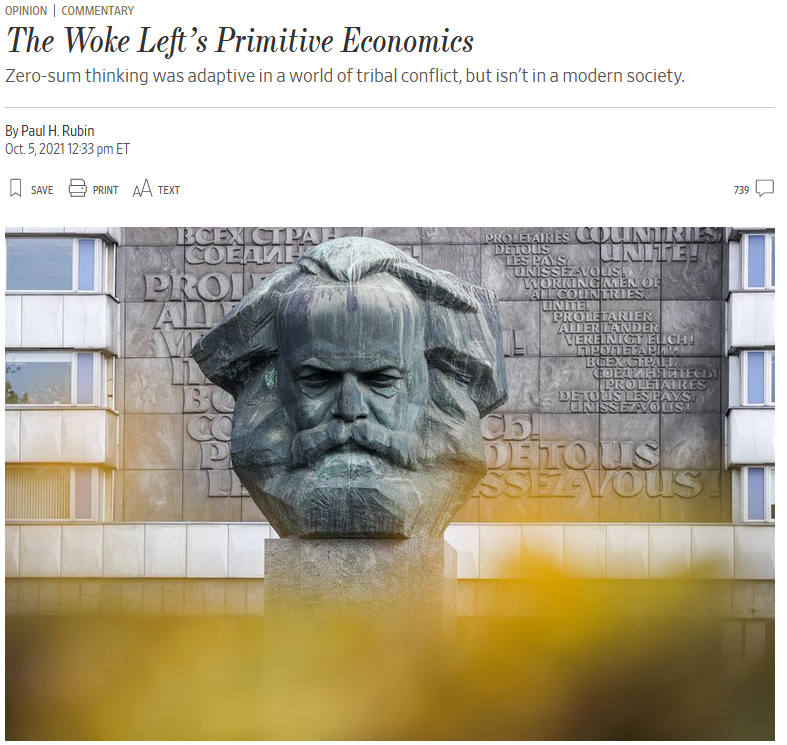 “Karl Marx called his system ‘scientific socialism,’” Paul Rubin wrote in the Wall Street Journal (10/5/21). “Modern leftists advocate a similar ideology and call themselves ‘woke’ to indicate that they understand the world better than the rest of us.”

In the wake of Black Lives Matter uprisings and the rise in awareness of white nationalist organizing, corporate media have taken up the term, often in a pejorative or sarcastic context. The Wall Street Journal editorial page has featured the word in dozens of headlines, in pieces defending opting out of Covid-19 vaccines (10/29/21), transphobia (10/14/21), anti–teachers union positions (7/7/21), free-market capitalism (10/5/21) and voter suppression (4/28/21). The Journal has even used it to attack the Chinese Communist Party (3/7/21; FAIR.org, 3/17/21).

This parade of anti-woke pieces is part of an ongoing crisis of legitimacy at the Journal. As the Columbia Journalism Review (Fall/21) noted, nearly 300 news-side employers in July 2020 signed a letter to the paper’s publisher “complaining about a ‘lack of fact-checking and transparency’ on the editorial page,” which “was undercutting the paper’s credibility and making it difficult to recruit and retain journalists of color.” The “anti-woke” backlash serves as a prime illustration: The editors are eager to attach a current buzzword about race and gender anxiety to any issue they can, no matter how much a stretch, to defend corporate America and the Republican Party from any form of politics anchored in addressing economic inequality. 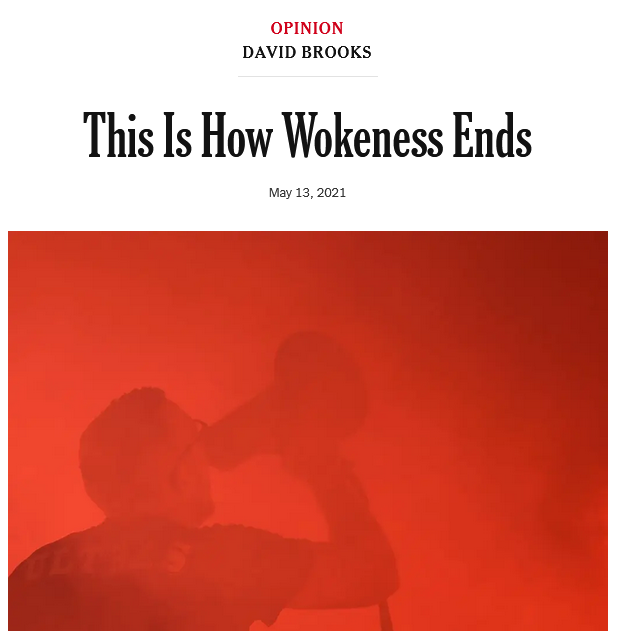 David Brooks (New York Times, 5/13/21) on “woke” language: “Performing the discourse by canceling and shaming becomes a way of establishing your status and power as an enlightened person.”

At the New York Times, the liberal and conservative columnists are united in their disdain for wokeness, seen as both an attack on Western openness and an albatross for the Democratic Party. Maureen Dowd (11/6/21) said “there is some truth” that wokeness sunk Democratic candidates; she cited corporate campaign consultant James Carville denouncing “this defund the police lunacy, this take Abraham Lincoln’s name off of schools,” even though neither of these things originated within the Democratic Party.

David Brooks (5/13/21) lamented how the language of wokeness was entering the corporate landscape, undermining “meritocracy” because wokeness “instigates savage word wars among the highly advantaged.” Thomas Edsall (5/26/21) warned that questioning the gender binary, as well as calls to “defund the police,” polled poorly.

Bret Stephens (2/22/21) denounced wokeness as a liberal, censorious crusade against offensive comedy, although this same columnist tried to get a professor fired for making a joke at his expense on Twitter (LA Times, 8/28/19). Stephens (11/9/21) returned to the topic again with high-octane sanctimony, saying that wokeness asserts that “racism is a defining feature, not a flaw, of nearly every aspect of American life,” and is a form of “indoctrination and extirpation, based on a relentless form of race consciousness that defies the modern American creed of” color-blindness. 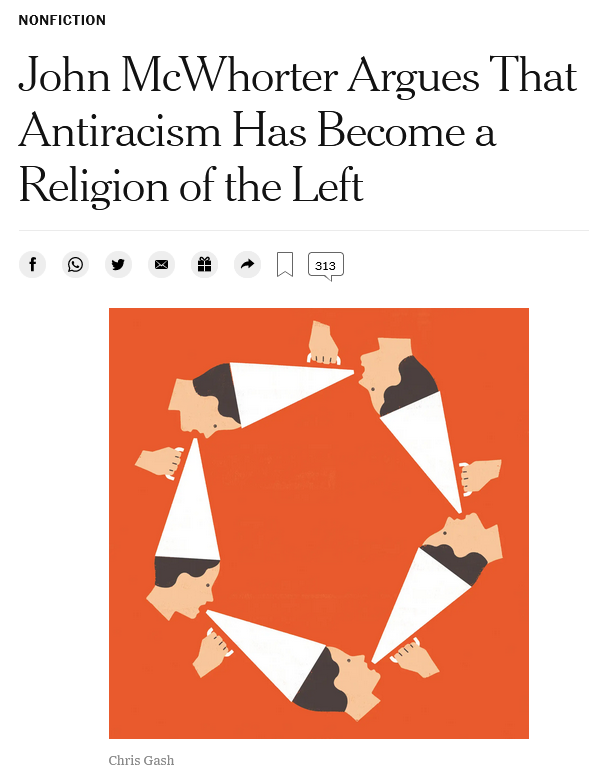 Zaid Jilani (New York Times, 10/26/21) wrote that John McWhorter sees “the woke racial worldview as harmful…because it deprives Black people of their humanity by infantilizing them.”

The problem is not just the opinion page. John McWhorter, a Times contributor, has written a critical book against “wokeness,” and the Times (10/26/21) didn’t just give him a favorable review: It hired Zaid Jilani—a former contributor to progressive outlets like the Intercept and FAIR.org, now writing for right-wing outlets like Quillette and Tablet, and devoted full-time to Twitter assaults against wokeness—to give the book a public relations boost. Jilani began with the stated assumption that the left’s “worldview” is that “nonwhites are little more than virtuous victims cast adrift on a plank in an ocean of white supremacy,” and that this view has quickly taken over everything from universities to corporations. Jilani’s only criticism of McWhorter’s book was that it didn’t offer a “thorough” enough takedown of racial justice writers like Ta-Nehisi Coates, Robin DiAngelo, Ibram X. Kendi and Nikole Hannah-Jones for Jilani’s taste.

Both Jilani and McWhorter are on the board of advisors of the Foundation Against Intolerance and Racism, which, despite its name, includes other activists who are riding the anti-woke wave, including Islamophobe Ayaan Hirsi Ali (Middle East Eye, 12/15/17) and Bari Weiss, who dramatically resigned from the New York Times (7/14/20) on the grounds that some of her colleagues disagreed with her conservative views. The review was rigged to prop up the right’s hysteria about “wokeness.”

At CNN (11/7/21), wokeness is why Democrats are losing electoral ground, and the news channel focused on (8/5/21) moderate Democratic New York Rep. Hakeem Jeffries’ anti-woke attack on his left-wing party colleagues. Chris Cillizza, covering Jeffries’ statements, said that while “Vermont Sen. Bernie Sanders and New York Rep. Alexandria Ocasio-Cortez remain hugely prominent voices within” the Democratic Party, there are “limitations of the activist left,” a statement that is true about any political faction.

Cillizza added that “the Democratic leadership is fed up with having to hear from the Twitter left about how everything they are doing isn’t good enough.” In summation, the crime of “wokeness” is being a part of the party’s left flank, and being too vocal about it.

The Hill (11/6/21) went further, saying that the party has gone “to war over ‘wokeness,’” which the paper described as the left’s accusation that the party’s centrists “are cravenly abandoning the party’s core supporters and its core purpose.” And former AP reporter Dan Perry (Daily News, 11/3/21) said the “American center” has a “visceral distaste for the cultural war stoked by the woke project,” throwing around phrases like “defund the police” and “trigger warnings,” but never linking these catch-phrases with the platform of the Democratic Party. 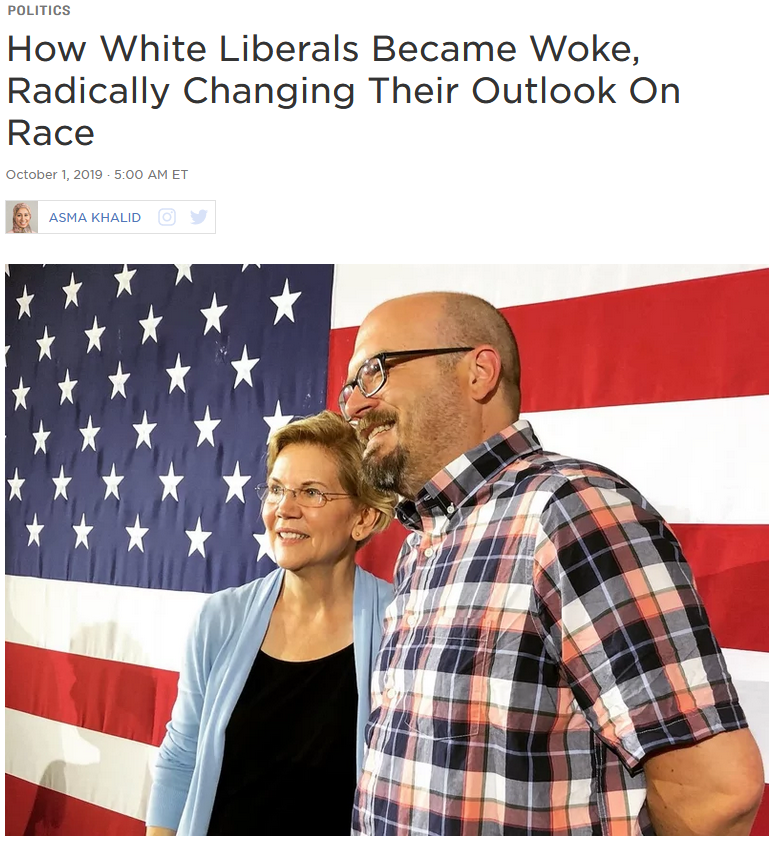 This year, especially in the wake of the 2021 elections, there seems to be an explosion of coverage where wokeness is flimsily pasted alongside “the Democrats,” with no particular obligation to show that ideas like “white privilege” or respecting trans people’s pronouns are part of the mainstream party’s platform (or that such notions are disastrously unpopular). But this problem has been brewing for years.

With a headline trumpeting that white liberals have become “woke,” NPR (10/1/19) two years ago reported that since 2012, “polls show an increasing number of white liberals began adopting more progressive positions on a range of cultural issues.” The piece reported that progressive whites are “more likely than in decades past to support more liberal immigration policies, embrace racial diversity and uphold affirmative action.”

This inclination isn’t described as negative in the piece, but because NPR is the closest thing liberals have to counterbalance the conservative dominance of US talk radio, it’s notable that the organization chose “woke,” a term that now acts as a catch-all pejorative for excessive cultural acceptance, to reference not particularly radical ideas, like that there’s bias against Black people in the criminal justice system.

The media equation between “woke” and anything vaguely in the realm of social justice allows the right to paint once fairly moderate liberal ideas as some kind of fringe—an East Coast and California counterculture that is woefully out of step with meat-eating, flag-waving straight white America. Worse, this trend of corporate media declaring “wokeness” as the contemporary existential crisis of American liberalism falsely converts tired political debates into something novel.

The Brooks column invoking meritocracy captures a fairly old conservative talking point about affirmative action (National Review, 6/3/03), and the Stephens column asserting that racial consciousness is clinging to past injustices and won’t reckon with a post-racial present echoes the George W. Bush administration (1/15/03). The idea that openness to immigrants is a multicultural affront to American culture can be heard in Pat Buchanan’s famous ad playing off fears of “press 1 for English” (CBS, 10/10/00). 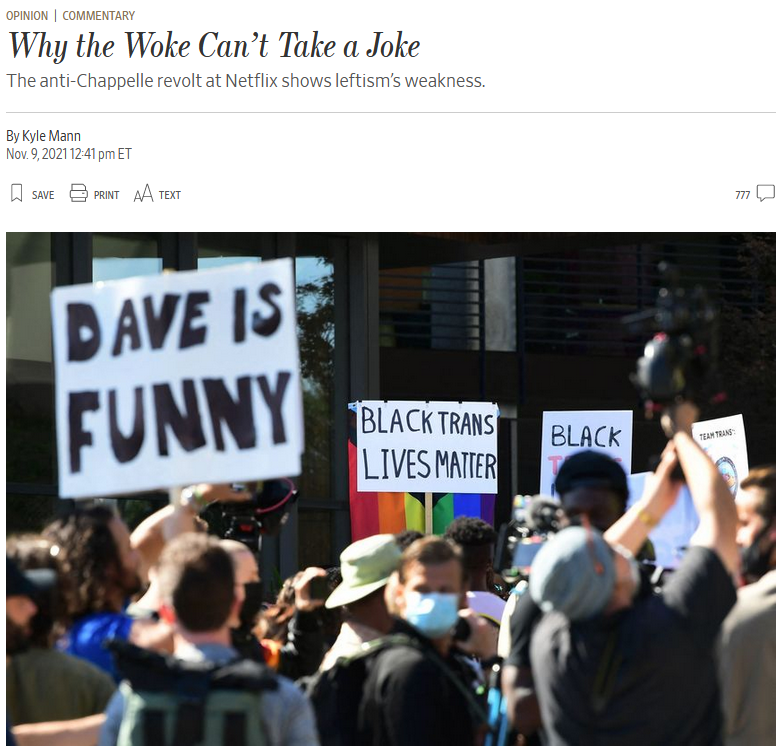 Kyle Mann (Wall Street Journal, 11/9/21) defends Dave Chapelle’s mockery of trans people because it reminds us that “those with an ironclad grip on our cultural centers are not imperial gods.”

The conservatives rallying behind Chappelle’s rant against the trans community are using the banner of edgy comedy as a form of retribution for perceived liberal dominance in media and entertainment; the Wall Street Journal (12/1/20, 7/27/21, 11/9/21) has devoted at least three opinion pieces to the subject of wokeness and humor in the last year, while The Hill (3/4/21) frets that this ambiguously defined “woke cancel culture” has “robbed us of…our sense of humor.” But that’s an argument that comes from City Journal editor Brian C. Anderson’s 16-year-old book South Park Conservatives, a product of the George W. Bush era of conservatism (New York Times, 6/26/05).

“It’s a straight-up moral panic,” Steven Thrasher, a journalism professor at Northwestern University who has served as a writer for the Guardian and Village Voice, told FAIR—the whole thing is “beat for beat the same thing as political correctness in the 1990s.” The difference, as Thrasher sees it, is that the words “woke” and the contemporary “cancel,” unlike “affirmative action” or “diversity,” come from Black vernacular, so when the corporate press mocks or belittles these terms, there is “a glee of having co-opted it, that’s like an extra twist of the knife.”

FAIR’s work is sustained by our generous contributors, who allow us to remain independent. Donate today to be a part of this important mission.