Across Ohio, tactics pioneered in Texas are being deployed in disruptive city council meetings 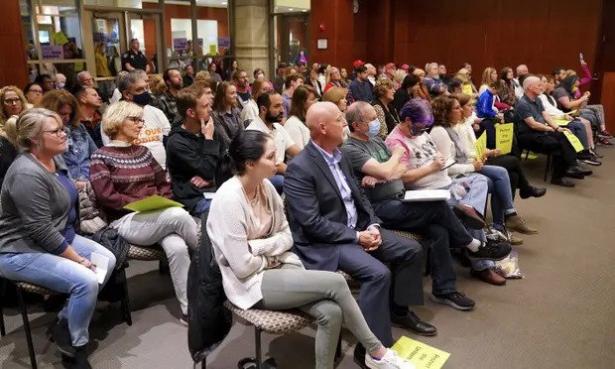 In May of this year, six city council members in Lebanon, Ohio, a city located just north of Cincinnati, voted on an ordinance that would effectively outlaw abortion for the 21,000 people that call it home.

As in countless council meetings in small cities across the country where mask mandates, teaching about race in schools and access to reproductive healthcare have become politically charged in America’s current climate, the night unfolded in a series of near-Shakespearean acts.

On the morning the meeting was scheduled, Krista Wyatt, a former firefighter elected to city council in 2018 and the only member expected to vote against the ordinance, formally resigned. In an accompanying statement, Wyatt wrote: “There is a core group of people who have hijacked the council to force their personal, political and religious views on the entire citizenship of Lebanon. It is not fair to the citizens and is not the role of a City Council member to be a moral compass.”

Dozens of people spoke at the meeting later that evening. Some sang, many shared deeply personal experiences of rape or miscarriages and a few even led prayers. Just outside the doors of city hall, pro-choice and anti-abortion groups similarly squared off, shouting at each other and urging passersby to honk in support of one side or the other.

Ultimately though, the vote was a resolute 6-0, making Lebanon the 29th city in the nation, and the first city in Ohio, to pass an enforceable ordinance outlawing abortion within their city limits. As the nation waits for a supreme court ruling on abortion rights, pro-choice advocates and activists across the US know first-hand that any upcoming national ruling might be almost irrelevant given what’s already taken place in Ohio and beyond.

For the last few months, small municipalities – many without any standing abortion clinics – like Lebanon, Mason and soon maybe others, have outlawed abortion. Though women in those cities can still travel to get an abortion, the bans send an intimidating message.

Bypassing statehouses and targeting smaller towns and cities governed by council has emerged as a successful strategy for anti-abortion advocates in recent years. In July, a report from the Guttmacher Institute revealed that at least 30 towns in six states – Arkansas, Indiana, New Mexico, New York, Ohio and Texas – have approved municipal abortion bans in the last three years. Some of these ordinances also target specific abortion funds and organizations providing other types of practical support to abortion patients.

Today, pro-choice advocates are preparing for the supreme court to hear arguments in Dobbs v Jackson Women’s Health Organization. Scheduled for December, the hearing marks the first time since Roe v Wade that the court will rule on the constitutionality of a pre-viability abortion ban and will determine whether all state laws that ban abortions are unconstitutional. If the court were to overturn Roe, the consequences would be felt widely and immediately, as several states have “trigger laws” in place that would automatically go into effect and outlaw most or all abortions.

Ohio is on the brink of passing its own trigger ban, Senate Bill 123, and has recently introduced House Bill 480, the most extreme abortion ban in the country, a copycat of Texas’s Senate Bill 8 (SB 8). This would be a total ban on abortion in the state, without exceptions for rape, incest or the safety of those who are pregnant and would also empower private citizens to sue anyone that provides abortion or helps someone access an abortion.

The tactic of outlawing abortion by city began in Texas, due mostly to the traveling preacher and director of the non-profit Right to Life of East Texas, Mark Lee Dickson. Since 2019, Dickson has traversed the country encouraging municipalities to pass ordinances outlawing abortion – including laws that defined abortion as premeditated murder and others that made it illegal for anyone to help someone obtain an abortion within city limits – and declare themselves “sanctuary cities for the unborn”.

His first success story was Waskom, a city of under 2,000 residents in east Texas, in June 2019. In the year and a half that followed, despite an enduring, evolving pandemic, Dickson did the same in 22 Texas municipalities. Ultimately, SB 8, which banned almost all abortion in Texas and landed before Scotus – which did not intervene – heeded the Waskom model in terms of how the law is enforced.

Dickson’s initiative, Sanctuary Cities for the Unborn, has now helped 41 cities – 37 in Texas alone – create custom-tailored ordinances that outlaw abortion based on the state’s law and the city’s charter. First to follow Texas’s suit were Ohio and Nebraska with two cities respectively. But how?

The president of Ohio Right to Life, Mike Gonidakis, has referred to Ohio as “the bedrock of the pro-life movement”.

Veronica Strevel, a military veteran, social worker and reproductive justice activist in Lebanon, agrees, asserting that Dickson has a pattern when it comes to determining which cities to target for these ordinances.

While Dickson has said in more recent interviews that he doesn’t approach city leadership, rather they reach out to him for help, this wasn’t always his story. Strevel points to interviews like this one in 2019, wherein Dickson admits to initiating contact with the mayor of Waskom, as he felt the city was “vulnerable” to pro-choice advocacy.

In October, just five months after the ruling in Lebanon, a second Ohio city passed the same ordinance. Like Lebanon, Mason – which is located just 14 minutes away – is known as a solidly conservative city. The Mason city council received the ordinance draft from Sanctuary Cities for the Unborn and Dickson confirmed he was in talks with officials in Mason before the Lebanon ordinance was even finalized.

“A lot of people do not think Ohio is as red or as right as Texas, but these anti-abortion groups just copy and paste policy from statehouse to statehouse and city to city,” says Jordyn Close, Ohio state coordinator with Urge: Unite for Reproductive and Gender Equity. “In city council meetings, the people that are testifying in favor of these bans and unconstitutional bills are not from here. They’re there representing anti-abortion organizations, forcing these things on our communities when they’re not always what citizens actually want.”

Strevel, who has lived in Lebanon for the last 10 years, says the effects on the community have been palpable.

Within two months of the ordinance taking effect, a survey was conducted by Main Street Lebanon and led by University of Cincinnati professor Michael Cook. It revealed local businesses were already seeing decreased sales, leaving their owners, who were already struggling with a pandemic, questioning if it was a good thing for the community after all. Lebanon business owners reported sales in June 2021 suffered in comparison with 2020 and 2019.

“This is just a natural side-effect of instituting an abortion ban,” Cook told the Cincinnati Enquirer. “I haven’t seen evidence of a formal boycott, but there are people boycotting. And socially, Strevel says dynamics have become so contentious between locals that whisper societies of anti-abortion residents are thriving behind closed doors and it’s not uncommon for strangers to find ways to quietly thank her for her outspoken advocacy.

“One of my friends spoke at last night’s city council meeting and a sitting councilman told her, ‘this is a conservative town and you should have done your research before you moved here,’” said Strevel. “I’ve had friends who’ve been followed home from council meetings and many of them won’t go on record. I definitely have felt targeted, not only in Lebanon but also in Mason.”

Apart from Ohio, Nebraska has also followed Dickson’s ordinances – first in Hayes Center in April and again just weeks after in Blue Hill. Two more cities, Dunning and Curtis, are considering outlawing abortion for their collective 1,000 population. But Andi Curry Grubb, executive director of Planned Parenthood in Nebraska, is confident those who identify as pro-choice in the state will prevail.

“I think folks are recognizing the threat to abortion rights in a new way and the immediacy of an impact to abortion rights and access is being understood differently,” said Grubb. “When you combine that with local municipalities trying to bring ordinances like this forward, it just is a bit of a continuation of what we’re seeing across the state, which is folks saying, ‘this is not who we are in Nebraska. This is not what we want.’”

As for Ohio, in the coming weeks two more city councils – in Celina and London –will consider similar measures. While many pro-choice advocates and activists remain confident like Grubb, others, such as Strevel, are resigned to the fate of their own city and are instead focusing on others.

“I didn’t go to last night’s council meeting. There’s nothing I can do for Lebanon in the next two years. If all I’m going to get is resistance from a now completely white male extremist rightwing council – because that’s what this city elected – I’m not wasting my time on Lebanon. Y’all want that for yourself? Fine. Everybody knows who I am and where to find me.”