What’s blocked President Biden from becoming “the next FDR” is a gaggle of pro-Wall Street Democrats, whose cynicism may sink the party in 2022. 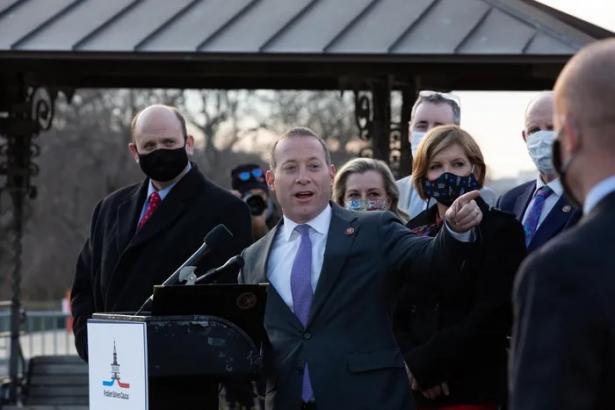 Rep. Josh Gottheimer (D., N.J.) speaks at the podium along with members of the Problem Solvers Caucus to praise a bipartisan emergency COVID-19 relief bill during a news conference, Cheriss May / Getty Images

Long ago, in a United States that now seems far, far away, the coming-to-America story of Saule Omarova would be hailed as a stirring endorsement of our nation as a beacon for democracy seekers. Born in 1966 under the Communist dictatorship of the USSR, and raised under her Kazakh grandmother who’d lost the rest of her family to Stalinist purges, she grew up with a passion for Pink Floyd and political dissent that caused her to stay here in the U.S. after the Soviet regime collapsed while she was a grad student in Wisconsin.

Not surprisingly, Omarova’s work as an American academic hasn’t focused on overthrowing capitalism but making it work better for everyday citizens. Inspired by the 2008 economic meltdown, she’s most recently proposed a scheme that would allow the Federal Reserve to take on the big banks’ monopoly on private deposits that caused a credit crunch in the Great Recession. Her research and resumé — she even worked for a time in the administration of George W. Bush — made Omarova seemingly an inspiring pick for President Biden, who tapped her to become the first woman and first nonwhite to oversee banking as comptroller of the currency.

But Omarova’s feel-good saga was lost in translation when she hit the Senate for her confirmation process. Instead, the hearing became a public demonstration of everything that’s wrong with American politics in 2021 — beginning with Republicans who hid their unbridled support for the monopolistic power for Big Banking behind completely twisting Omarova’s life story in the worst display of Red-baiting on Capitol Hill since Joe McCarthy’s liver failed. It started with Pennsylvania Sen. Pat Toomey — Wall Street’s man in the Senate — demanding a paper on Marxism required by her Moscow State University professors “in the original Russian language,” to kick off efforts to portray Omarova as some kind of Manchurian candidate for the job. It devolved into Louisiana GOP Sen. John Kennedy telling the nominee, “I don’t know whether to call you professor or comrade” — a no-sense-of-decency moment even for today’s Republicans, at long last.

But what happened next is much more revealing about what’s broken with American politics, and arguably matters a lot more as the nation backslides into 2022 midterms that could shake democracy to its core. Because if you think that Senate Democrats rose up to this shameful display of modern McCarthyism by rallying around President Biden’s nominee or her ideas that banking should work for the middle class, then you don’t know the soul of today’s Democratic Party. 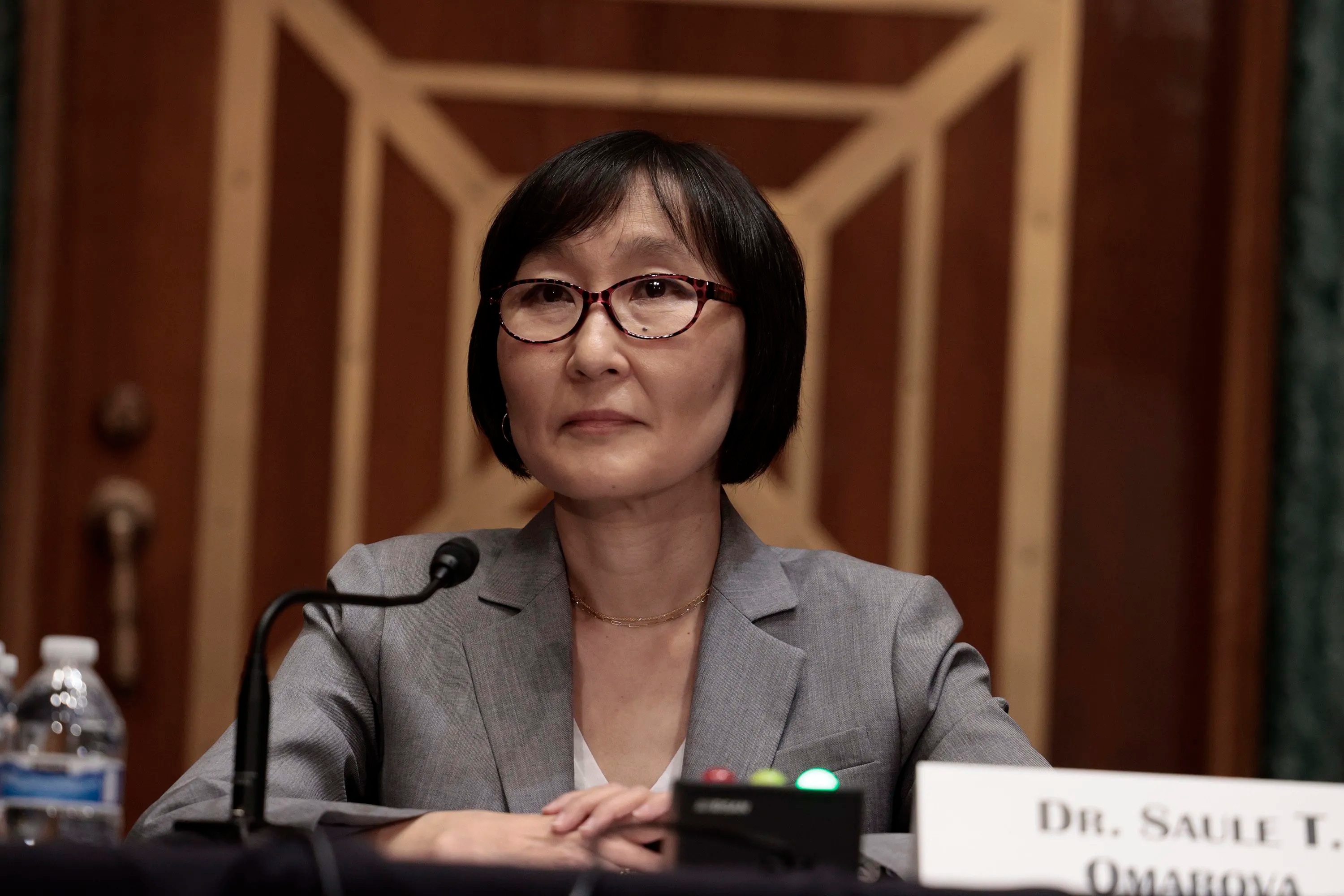 Saule Omarova listens during her nomination hearing to be the comptroller of the currency with the Senate Banking, Housing and Urban Affairs Committee on Capitol Hill on Nov. 18 in Washington.Anna Moneymaker / MCT

Instead, a so-called cadre of centrist Democrats — really extremists in defense of their wealthy donors on Wall Street, Silicon Valley and elsewhere — sneaked up from behind to put the dagger in Omarova’s political fortunes. In a scenario where all 50 Democratic votes were needed, five of these so-called moderates — including Arizona Sen. Kyrsten Sinema, a flashpoint in the downsizing of Biden’s progressive ambitions — have reportedly told the White House they can’t support Omarova, which will kill her nomination. One of the five Democrats, Montana Sen. Jon Tester, had grilled Omarova on a prior comment that seemed critical of Big Oil and Gas.

The torpedoing of Omarova by her own party is hardly an aberration. Instead, it felt like the exclamation point on a recurring theme in Year One of the Biden administration — a new president’s determination to turn around the battleship of American politics to help the struggling middle class either slow-walked or increasingly blocked by an entrenched sliver of pro-Wall Street and pro-donor-class Democrats.

We’ve watched this process writ large as the centerpiece of the Biden agenda — the formerly $3.5 trillion social welfare and climate change package with the unfortunate name of Build Back Better — has been stripped of popular items like free community college and seen other key features like paid family leave and lowered prescription drug costs sharply whittled down. The cuts happened not because of Republicans — a hopeless bunch whose votes thankfully aren’t needed to pass this so-called reconciliation bill — but because of conservative Democrats like West Virginia Sen. Joe Manchin, the Chamber of Commerce lackey who with his family literally owns a coal company, or New Jersey Rep. Josh Gottheimer — whose $450,000 in donations from private-equity firms last cycle is more than any House member, including any pro-business Republican. Even at a much lower $1.5 trillion price tag, it’s not even clear these divided Democrats can pass Build Back Better.

At the end of the day, it wasn’t Republicans but much of this same cadre of “ConservaDems” — including Sinema, whose sharp moves to the right on health-care issues have coincided with $750,000 in campaign contributions from Big Pharma and medical firms — that nearly killed the provision aimed at lowering drug costs (which had reemerged in a much downsized form). And it’s been these same Democrats — particularly Northeasterners like New Jersey’s Gottheimer who’ve benefited as Democrats become the party of college-educated white suburbanites — who’ve pared back politically popular new taxes on corporations and the wealthy but are bringing back a tax break for high-income homeowners, allowing Republicans to bash the party’s seeming hypocrisy. The gross irony here is that the pundit class — especially the centrists who fantasized about replacing Trump with a somehow popular but essentially do-nothing version of Biden — is now blaming “the Squad” of the furthest left Democrats and excessive “wokeness” for the sagging poll numbers of the Democrats and their president. But let’s get real. On the “wokeness” front, gridlock in Washington hasn’t happened because lawmakers are insisting on using the right pronouns or using the word “Latinx.”

But much more importantly, it’s been the left wing in Congress — especially the House Progressive Caucus led by Washington state Rep. Pramila Jayapal — that has worked most closely with Biden on formulating an actual social welfare policy for the middle class, and which has been willing to compromise again and again and again in order to get something, no matter how diminished and thus deflating, done for its voters. The representatives who dare to brand themselves as “moderates” have actually been the jihadists who’ve threatened to blow up the Biden presidency unless their demands — to protect Big Banks, Big Pharma and the owners of big McMansions who attend their fund-raisers — are met, time after time.

There’s two big problems here. The obstructionism of centrist Democrats has mostly squandered what could have been a brief two-year window — given the dysfunctional cycle of American politics — to take meaningful action on climate change and enact the kind of policies around higher education or paid family leave that are routine in every other developed nation. That’s bad news both for the future of both a civil U.S. society and the health of the planet. Democratic Sens. Kyrsten Sinema of Arizona and Joe Manchin of West Virginia board an elevator after a private meeting between the two of them on Sept. 30 on Capitol Hill.Jabin Botsford

But the schizophrenia of today’s Democrats — watching Biden and his new progressive allies run full-speed at the football of change, only to watch the Democrat-in-name-only Lucys like Gottheimer and Sinema yank it away again and again — has also left the average, not-on-Twitter, not-politics-obsessed voter utterly confused what the party really stands for. I don’t blame them. Many days I wonder myself.

The irony is that while the Josh Gottheimers of the world think they are saving themselves by bringing back a big tax break for their rich but socially liberal college-educated districts, they are in reality trashing the Democratic brand, and the ensuing tsunami is going to swamp them as well. In calling their billionaire donors and bragging how that blocked Biden from becoming the new FDR, they’re too money-besotted to see they are creating a Jimmy Carter scenario for Democrats that could end with their party again in the wilderness for decades. In driving away young voters and the nonwhite working class, these political geniuses don’t seem to understand that 37 — the percentage of voters with a college degree — is lower than 50.

Now, in failing to defend Saule Omarova against the brutal McCarthyism of her Republican critics, the Democrats’ centrist wing is hitting a moral low to coincide with their lack of political foresight — as the party melts down and an opposing party that no longer believes in democracy is advancing on the capital, again. In the smoldering ruins of the near future, maybe the right question for these Quislings who’d rather save JP Morgan Chase and Merck than the American Experiment is this: Are you now, or have you ever been, a centrist Democrat?

I'm the national columnist — with some strong opinions about what's happening in America around social injustice, income inequality and the government.