As higher education hires more adjuncts, it also relies on them more. Colleges and universities can’t fulfill their teaching mission without them — which gives part-timers more power, if they choose to use it. 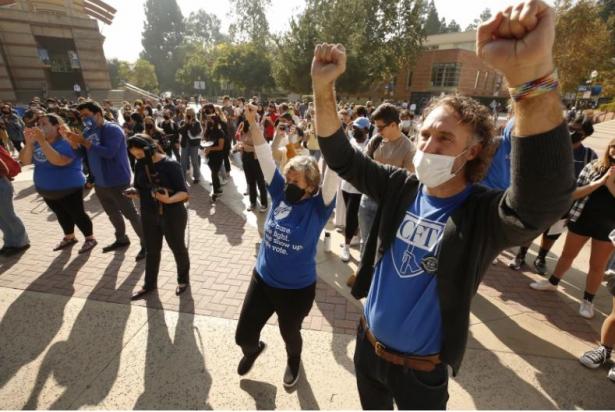 The era of college courses taught mostly by tenured professors, who spend time on research and scholarly pursuits in addition to teaching, has been fading fast. Increasingly, the work of instructing students now rests with lecturers or adjuncts — non-tenure-track faculty, almost always working part time for less money and with almost no job security.

In California, they’re often known as “freeway fliers” because they drive from one campus to another in order to patch together a mediocre full-time salary teaching one or two courses at several colleges and/or universities, usually without benefits.

On a per-hour basis they might make $70 to $120. But that’s only for the hours they’re in front of a classroom. The outside-of-class responsibilities easily triple their workload. They must plan lessons, grade papers and tests, write letters of recommendation, deal with students’ other needs and hold office hours — in whatever space they can find because they’re seldom assigned an office. They usually can be let go for a semester or forever, even if they’ve worked at the institution for a decade or more, for any reason or no reason at all. Nearly a quarter of them rely on some form of public assistance, usually unemployment insurance between semesters and academic years, according to a 2020 report by the American Federation of Teachers.

This is good neither for the instructor nor the student. But the recent tentative agreement between the University of California and unionized lecturers — who teach close to a third of the classes — points out the inherent irony that could change what’s been an exploitative situation for far too long. As higher education hires more adjuncts, it also relies on them more. Colleges and universities can’t fulfill their teaching mission without them — which gives part-timers more power, if they choose to use it.

A glut of doctorate-holders and a falloff in the hiring of tenure-track professors as colleges cut costs have created a buyer’s market for adjunct professors, who often have the same doctoral degrees as full-time faculty. Fifty years ago, 80% of instructors were tenure-track professors; now almost that percentage are adjuncts. Parents who are forking over big money for their kids’ education generally have little idea about the change. These instructors have even become a significant part of the landscape at small liberal arts colleges that used to pride themselves on classes taught almost exclusively by tenure-track faculty, according to Helena Worthen and Joe Berry, authors of a newly published book on the topic.

Right now, Berry said, part-time contingent workers make up 75% of college instructors in the U.S. and teach more than half of the college courses. That’s especially true at California community colleges, where adjuncts outnumber tenure-track professors by almost 4 to 1, according to John Martin, chairman of the California Part-time Faculty Assn. If those adjuncts cobble together a full-time load of three courses, they might make $50,000 to $70,000 per academic year — less than most K-12 teachers in California.

This isn’t good for students, either. Though some adjunct faculty members put in an enormous number of unpaid hours for the love of their job, others find that kind of work load unrealistic.

They invent shortcuts, Worthen said, including reducing the number of assignments so that they have less grading to do, or holding “office visits” by phone. They might limit the number of letters of recommendation that they’ll write. And if a student challenges a final grade, it can take 20 hours to look up every assignment and justify each grade. Some adjuncts would rather just change the grade than “donate” that much of their unpaid time. They often aren’t granted the freedom to develop their own curricula.

No wonder so many University of California adjunct faculty leave each year. Some are pushed out, but others leave on their own volition, according to a CalMatters report that found about a quarter of UC’s adjunct faculty turn over every year. Worthen says this kind of churn is common among contingent part-time instructors and results in a faculty that may lack institutional knowledge and teaching experience.

Perhaps even more problematic in the overreliance on part-time instructors is the diminishment of academic freedom. Most adjuncts know that they can be let go for any reason and may avoid saying anything remotely controversial to students. Even their personal social media accounts could become fodder for student complaints.

Adjuncts need the “freedom to teach without self-censorship,” Worthen said, as well the “freedom to give grades that students really deserve.” Or as Martin put it, “Students have been emboldened and they will weaponize anything to make sure an instructor will bend to their wishes.”

These days, colleges can always find a fresh face to replace the one they pushed out, even though adjuncts are generally as educated as tenured professors, or have long experience in certain careers that is of immediate benefit to students.

The tentative UC agreement — which provides new benefits for lecturers such as family leave as well as a new measure of job security based on performance evaluations — has awakened a sense of the possible in adjunct faculty nationwide, Worthen said, and should be seen by higher education as a warning shot. Only about 20% of non-tenure-track faculty are unionized, a number that probably will rise now. Whether it does or not, colleges and universities have been placed on notice: They can’t operate without adjuncts, so for the benefit of their students, academic freedom and instructional stability, they should pay and treat these instructors fairly.

[The Los Angeles Times’ editorial board determines the editorial positions of the organization. The editorial board opines on the important issues of the day – exhorting, explaining, deploring, mourning, applauding or championing, as the case may be. The board, which operates separately from the newsroom, proceeds on the presumption that serious, non-partisan, intellectually honest engagement with the world is a requirement of good citizenship. You can read more about the board’s mission and its members at the About The Times Editorial Board page.]