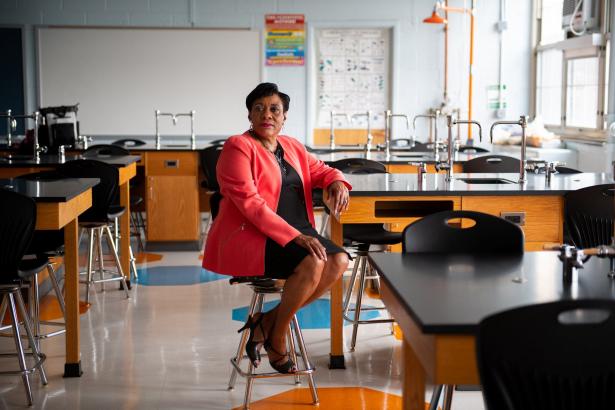 Becky Pringle, the president of the National Education Association, has been influential on the Biden administration. “I can listen to her speak about equity,” Education Secretary Miguel Cardona said, “and walk away smarter., Kriston Jae Bethel for The New York Times

PHILADELPHIA — Becky Pringle was racing through her hometown to her fourth event one day in September when her staff alerted her to a looming controversy.

Fox News was preparing to publish emails between the White House and officials at the Centers for Disease Control and Prevention, showing that the C.D.C. had continued to advise masking in schools last spring out of fear of a public showdown with Ms. Pringle, the head of the nation’s largest teachers’ union and the highest-ranking Black labor leader in the country.

The story seemed to affirm the most fervent criticism of her union, the National Education Association, in recent months — that it had too much control over school reopening decisions during the coronavirus pandemic and was wielding outsize influence in the Biden administration. Ms. Pringle shrugged it off with a single-sentence tweet: “It’s no secret we want to keep our students and schools safe.”

Under President Biden, teachers’ unions have re-emerged as power players in shaping federal education policy after largely being sidelined during the Trump administration. The N.E.A., in particular, has enjoyed increased visibility: Jill Biden, the first lady and a longtime educator, is a member. On the same day the Fox story published, Mr. Biden, during remarks honoring labor unions, slipped in a joke that in the minds of critics has taken on a double meaning: “I sleep with an N.E.A. member every night,” he said.

Ms. Pringle’s favor in the White House reflects a turning point for the N.E.A. The three-million-member organization is normally overshadowed by its counterpart, the American Federation of Teachers, even though it has nearly twice as many members. Because the A.F.T. represents many of the nation’s large, urban school districts, it has long wielded considerable power in Washington. At the same time, its lack of term limits has made its high-profile leaders more like monarchs — its current president, Randi Weingarten, has served for 13 years.

Ms. Pringle quietly ascended via Zoom in September 2020 to her three-year term as president of the N.E.A. Since then, she has been unapologetic about the fact that she has “leaned into” the union’s new spotlight. She has often proclaimed that Mr. Biden has drawn from the “N.E.A. playbook” to shape policy goals, like prioritizing teachers for vaccination and securing record levels of school funding in Covid relief legislation. 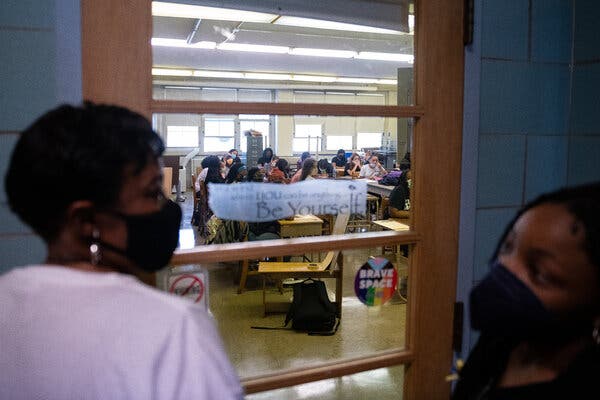 Ms. Pringle, left, during a tour of the Philadelphia High School for Girls, her alma mater. When she was a student, her counselor cautioned her that math and science might be “really hard” majors.Credit...Kriston Jae Bethel for The New York Times

And she has no regrets about the union’s influence in conditioning school reopenings on more safety measures, including the C.D.C. guidance, and resources that would stretch beyond the pandemic. “There’s no way to know how many lives were saved,” Ms. Pringle said, “but I do know this for sure: The things that we have now, we would not have if we hadn’t fought for it.”

But some political observers predict that Mr. Biden’s close relationship with the teachers’ unions could backfire.

“I don’t think the unions are playing well when we’re seeing urban and suburban parents not particularly happy about what’s been happening in schools the last 18 months,” said Frederick M. Hess, the director of education policy studies at the American Enterprise Institute, a conservative-leaning think tank.

What motivates Ms. Pringle, she said, is a longtime need that is ever more pressing now: to “reclaim public education as a common good, and transform it into something it was never designed to be: racially and socially just, and equitable.”

She sees both the pandemic, which exposed gross inequities that have plagued the nation’s education system for decades, and the presidency of Mr. Biden, who has pledged to make equity a cornerstone of his policymaking, as opportunities to achieve that goal.

While much of the focus has been on her relationship with the White House, Ms. Pringle has pressed virtually every cabinet secretary for more money for things like “community schools” that provide social services to low-income students and their families, which made it into the president’s budget, and electric school buses, which made it into the sprawling bipartisan infrastructure bill.

“I can listen to her speak about equity, and walk away smarter,” said Miguel Cardona, the education secretary.

Ms. Pringle is seeking to position her union at the forefront of the social justice movement — a tall order, some believe, for an organization whose membership is more than 70 percent white, with a large number of members living in purple and red states. Her success, she believes, is tied to having Mr. Biden as a partner.

“It is not lost on me that I’m a Black leader in this moment, pushing this,” she said. “But I’m not alone. Joe Biden talking about racial justice is no small thing.”

Already, Ms. Pringle’s agenda has plunged an organization that has historically tiptoed around racially fraught policy debates — it did not even take a position on Brown v. Board of Education — headfirst into the racial reckoning unfolding in the nation’s public schools.

Sign Up for On Politics  A guide to the political news cycle, cutting through the spin and delivering clarity from the chaos. Get it sent to your inbox.

This year, the N.E.A. published its Racial Justice in Education Resource Guide, which advises teachers on how to directly address issues such as white supremacy, implicit bias and acknowledging how race influences their work. Over the summer, at the union’s representative assembly — where Mr. Biden addressed the group, calling the N.E.A. “indispensable” — delegates voted to pour $675,000 into measures to “eradicate institutional racism” in public schools.

In response to growing protests against teaching students about the legacy of systemic racism, which conservative groups deride with the umbrella term “critical race theory,” the union also began an “Honesty in Education” campaign that supports teaching “truthful and age-appropriate accountings of unpleasant aspects of American history.”

In addition, the N.E.A. has pledged more than $56,500 to research conservative groups that it said were “attacking educators doing anti-racist work.”

At a recent virtual town hall with educators in Pennsylvania, Ms. Pringle was direct in response to a question about how the union would protect its members from efforts to restrict what they could teach students.

“We have to be honest with them about times when our country has lived up to its magnificent promise and the times when it has not,” she said. “So we’re going to continue to stand up and fight any efforts to censor our teachers, and continue to teach the true and complete history of America.”

These positions have drawn the ire of union critics, who have long accused teachers’ unions of being functionally run as super PACs, more concerned with using members’ dues to dominate political arenas than improving the quality of public education.

Ms. Pringle’s platform has also been met with skepticism from critics who believe that for at least the first year of the pandemic, the union used its power to prioritize the demands of its predominantly white members over the millions of Black and marginalized students who disproportionately suffered during prolonged school closures.

Erika Sanzi, the director of outreach at Parents Defending Education and a former teacher and N.E.A. member, said a photo of Ms. Pringle and Ms. Weingarten posing with Dr. Biden on Mr. Biden’s second day in office — while many students remained isolated at home — captured Ms. Pringle’s biggest challenge: the perception that the union prioritizes power.

“For me, it was a quintessential snapshot in time of what I have always believed,” Ms. Sanzi said. “The union is, and will always be, for adults. It will never be for children.”

Keri Rodrigues, the president of the National Parents Union, said that parent groups focused on student equity admired Ms. Pringle’s authenticity, but it was unclear if that was enough.

“It’s her job to advocate for the grown-ups, and she does it,” Ms. Rodrigues said. “But to help kids, it’s going to take more than putting out some beautifully worded guides. It’s going to take a lot of tough conversations, because part of this racist machine is her members.”

Ms. Pringle, who was elected president with more than 90 percent of members’ votes, acknowledges that she has alienated members with her platform. She has been plainly asked: “Becky, why are you calling me a racist?”

Yet under her tenure, the union has seen progress. There has been a sharp increase in the number of members seeking “micro-credentials” for racial justice, diversity and implicit bias training, so that teachers can better understand the student population they serve. 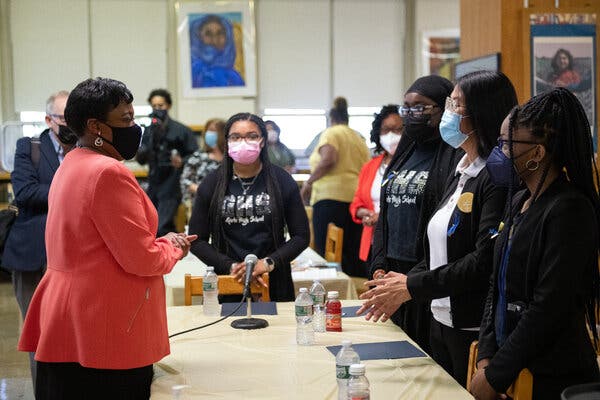 During a recent visit to the Philadelphia High School for Girls, Ms. Pringle sought feedback from students about what a “just and equitable” education might look like.Credit...Kriston Jae Bethel for The New York Times

“Her willingness to push has definitely rubbed members the wrong way,” said Paula Herbart, the head of the Michigan Education Association. “But they do know that their livelihood is tied to the kind of public education that Becky is fighting for.”

Though she left the classroom in 2008 after teaching middle school science for more than 30 years, Ms. Pringle, 66, still presents like a teacher. She is measured and methodical. You will not see her banging on the door of the Education Department like her predecessor, or showing up regularly in news clips like Ms. Weingarten. She speaks in long monologues, not sound bites.

Her advocacy for equity started as a parent and teacher in suburban Harrisburg, Pa., where she publicly protested that her son’s kindergarten class had 33 students. As a local union leader, she led her affiliate to take action when she noticed that her students of color were not in advanced science and math courses. As vice president of the N.E.A., Ms. Pringle was the co-chair of the union’s task force to disrupt the school-to-prison pipeline.

Derrick Johnson, the N.A.A.C.P. president, met Ms. Pringle when he was the president of the Mississippi chapter and she was supporting his ballot initiative to make education a constitutional right.

Her experiences as a student were perhaps the most formative.

Ms. Pringle’s father was a history teacher who had to supplement his lessons to include Black history, from the Civil War to Reconstruction to the Harlem Renaissance, that was omitted or glossed over in the curriculum. Her mother was a crossing guard and, later, a cook at a Head Start program in Philadelphia whose meals drew the superintendent to her cafeteria every Wednesday before Thanksgiving.

Ms. Pringle was in elementary school when Philadelphia was beginning to wrestle with the issue of desegregating its public schools. By the time she tested into the prestigious Philadelphia High School for Girls, known as Girls High, she felt its effects. When she chose math and science as her majors, her counselor told her it might be “really hard.” She went home and told her father, who marched her back to the school to ensure that she would get the majors she wanted.

On a recent visit to Girls High, Ms. Pringle told the young women about how she was rejected from a gymnastics and dance team. Later a spot opened up. She tried out again and made it. The gym teacher apologized that she had not made it the first time, telling her, “We didn’t see you.”

“That changed the trajectory of my life,” Ms. Pringle told the girls. “I’ll never allow anyone to not see me again.”