'Clock Is Ticking' on the Child Tax Credit

"Anyone who thinks that we should cut that back and tell millions and millions of working parents that they're not going to have the money they need to raise their children with dignity, I think that's a terrible mistake." 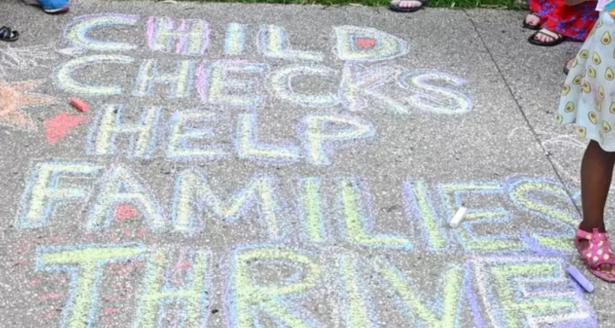 Child advocates kicked off a grim countdown Friday as Democrats appeared unable to find a way of passing an extension of the child tax credit, without which nearly 10 million children are at risk of falling back into poverty.

With talks regarding Build Back Better stalled, the party has less than two weeks to pass an extension of the child tax credit (CTC), which was distributed as monthly payments in the second half of 2021 and offered millions of families up to $300 per child, as well as making the lowest-income households eligible for the full credit.

"Anyone who thinks that we should cut that back and tell millions and millions of working parents that they're not going to have the money they need to raise their children with dignity, I think that's a terrible mistake."

"The clock is ticking," said McKenzie Wilson, spokesperson for Fighting Chance for Families, on Friday. "There are just eleven days left to extend the popular expanded Child Tax Credit in time to secure a January disbursement of its monthly payment to 35 million families. Congress must act swiftly to avoid this lapse in payments to ensure that parents have the security they need to remain in the workforce and cover the rising cost of raising children."

According to Sen. Ron Wyden (D-Ore.), the Senate needs to pass legislation extending the CTC by December 28 in order to avoid an interruption in payments covering about 60 million children across the country. If the measure isn't passed, families will have already received their last monthly payment as of December 15.

The potential end of the child tax credit is coinciding with the White House's march toward its so-called "return to repayment" plan, requiring about 45 million Americans to begin paying off their student loans after a moratorium of nearly two years.

In addition to adding significant financial stress for families amid what is expected to be an explosion in new coronavirus cases due to the highly-transmissable Omicron variant, the decision to restart student loan payments and end the monthly CTC in a midterm election year would be the result of a "delusional" political strategy, said Rep. Alexandria Ocasio-Cortez (D-N.Y.) Friday.

"We need to act now," the congresswoman said.

Both the CTC and the student loan payment pause have proven popular across the political spectrum.

A survey conducted earlier this month by Fighting Chance for Families and progressive think tank Data for Progress showed that Americans support the expanded CTC by a 24-point margin.

Separately, a new Data for Progress poll out Tuesday showed that 55% of likely voters back extending the student debt moratorium, including 74% of Democrats, 56% of independents, and a third of Republican voters.

"The current and popular pause on student loan payments has provided relief to some 32 million borrowers during this ongoing pandemic," said Marcela Mulholland, political director at Data for Progress, on Thursday. "Rolling such relief back as the Omicron and Delta variants spread across this country will jeopardize millions of Americans and is sure to have political consequences."

After talks between the White House and the Senate over the Build Back Better Act reportedly fell apart Thursday over right-wing Sen. Joe Manchin's (D-W.Va.) objection to the CTC, Senate Democrats began discussing other methods of ensuring the measure is passed by December 28 to ensure the IRS has time to get payments to families by January 15.

Wyden proposed an amendment to extend the CTC, adding it to to an unrelated bill regarding Chinese imports made with slave labor, but Sen. Marco Rubio (R-Fla.) objected to the provision.

Senators are also hoping to pass a 10-year extension of the CTC—paid for with Wyden's Billionaires' Income Tax—with a stand-alone bill, but they would need 10 Republicans and all the Democrats to support the legislation due to the filibuster, which requires 60 votes.

Senate Minority Whip John Thune (R-S.D.) on Thursday dismissed the notion of extending the credits which have helped millions of families afford rising grocery bills, child care, rent and mortgage payments, and other essentials, telling The Hill, "That's not something our members are interested in."

As senators discussed contingency plans to ensure families continue receiving monthly payments amid ongoing talks about getting the Build Back Better Act passed, Sen. Bernie Sanders (I-Vt.) warned that failing to extend the credits would leave tens of millions of families feeling abandoned.

"Anyone who thinks that we should cut that back and tell millions and millions of working parents that they're not going to have the money they need to raise their children with dignity, I think that's a terrible mistake,” Sanders told The Hill Thursday. "If you ask millions of working parents about whether or not they need the help to raise their kids in these difficult times, they would say 'yes.'"