Looking for something other than sappy Christmas movies to watch over the holidays? There is no greater and more prescient skewering of the absurdity of the American national security state than Mike Judge’s Beavis and Butt-Head Do America. 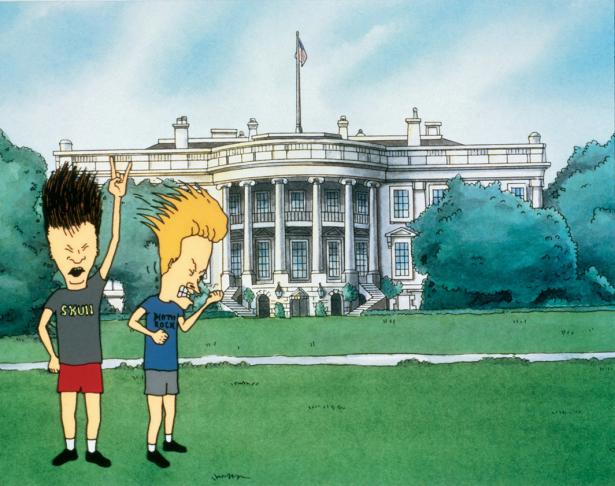 Twenty-five years later, Beavis and Butt-Head Do America remains an excellent satire of the twenty-first-century US security state.,(MTV)

All this is pretty standard media hype cycle stuff, but that shouldn’t obscure what’s really worth discussing: Beavis and Butt-Head Do America is the greatest satire of the twenty-first-century American security state. And what’s even more impressive is that it was made in the twentieth century, five years before 9/11.

Want a movie where the antagonists are agents of the Bureau of Alcohol, Tobacco, and Firearms, at that time — pre-ICE, pre-TSA — the most prominent target of right-wingers obsessed with violent government overreach and obsession? Do America is it. Want a movie that weirdly predicts the invasion of Washington, DC, by ill-mannered louts? Do America is it. Want a movie where the protagonists are two white, middle-class teenage incels whose entire worldview is based on misinformation and brain-rotting broadcast content? Do America is it. And that’s not to mention that it provides us with a tantalizing glimpse of an alternate reality in which a young Chelsea Clinton falls in love with a slack-jawed adolescent called Butt-Head. (Given the fact that, in our world, she ended up with a Wall Street vulture who’s worked for some of the country’s worst hedge fund outfits, things are probably better in that alternate timeline.)

Judge may seem an unlikely candidate to be named the preeminent satirist of late-capitalist American decline since Terry Southern. But the farther you pull back, the more sense it makes. Judge is a stocky, square Texan who’s been going bald since he was a teenager and has a background in science. He’s often identified as a conservative or a libertarian at worst, though he goes to great pains not to discuss his actual political leanings explicitly. 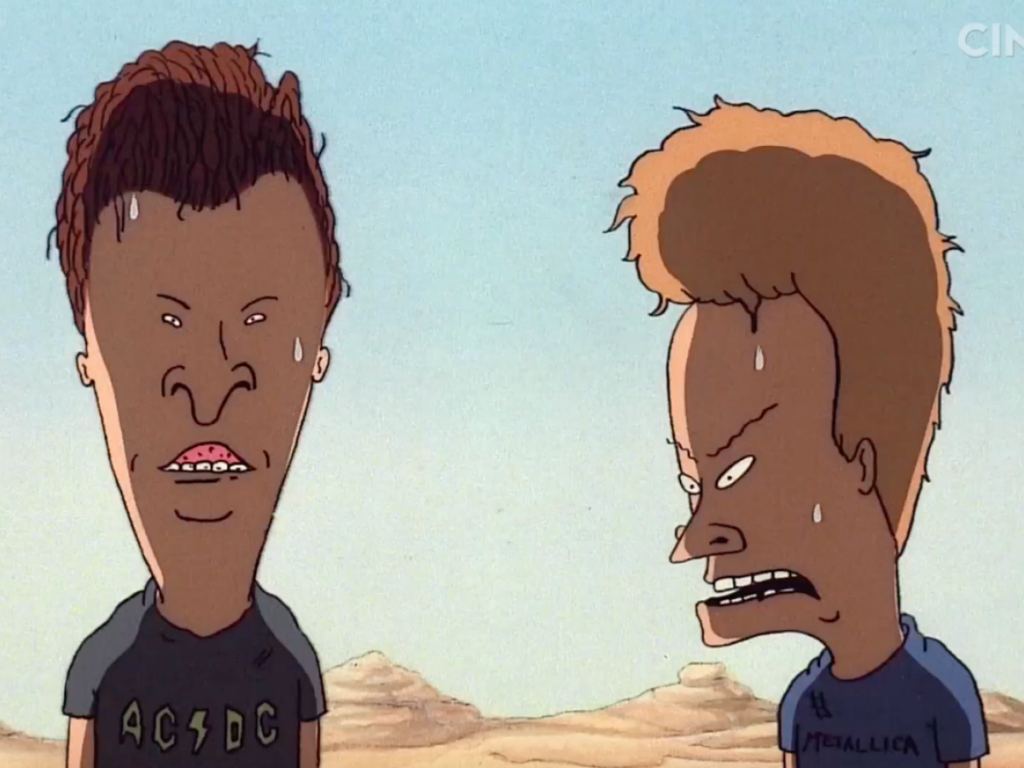 Certainly, Judge is no Marxist. Office Space starts out as a blistering workplace critique but ends with an iteration of the goofy, persistent idea that manual labor is pristine and empowering. Idiocracy captures the anti-intellectual nature of American society but muddles it with a lot of quasi-eugenics. And he did make The Goode Family, a satire of liberal do-goodery so heavy-handed it could have been greenlit by Fox News instead of ABC.

But for all that, he remains the most insightful, most accurate satirist of American archetypes we have. The reason King of the Hill still shows up in contemporary memes is because the main characters are such precise and recognizable types. Judge may not detest big tech companies because of their capitalist nature, but he absolutely understands why they’re so worthy of parody, and why the lies they tell us — and each other — are such bad jokes that they make for good jokes.

And then there’s Beavis and Butt-Head Do America.

Our Reality Has Outpaced Beavis and Butt-Head’s Fantasy

It was a smart decision to use the picaresque format for the film. As Fredric Jameson put it in his discussion of Raymond Chandler, this literary form, usually featuring the passage of a roguish “wise fool” through a variety of places and situations, is valuable because it allows for the crossing of class lines. Well, there are no fools like Beavis and Butt-Head, and no fictional characters less respectful of class distinctions or security-state shibboleths; for them, there are things that suck and things that rule, and never the twain shall meet.

For a movie made just a few years after the end of history, Do America does America with incredible prescience, from the militarization of the police state to the presentation of the government, not just as incompetent and corrupt, but a joke at its very foundation. A scene where Beavis literally uses the Declaration of Independence to wipe his ass never made it to the final cut, but it’s entirely in keeping with a movie that mocks both our sacred cows and our willingness to laugh at those sacred cows.

The film has so many virtues that its flaws are much easier to overlook than those of any other Mike Judge product. The animation is both crude (by modern standards of computer-aided, soulless perfection) and hypnotic, never more so than in a scene where Beavis eats a magic mushroom and has a memorably freaky hallucination. The music hits the sweet spot of mid-’90s nü-metal just before it started to curdle. It’s of its time, but not so stuck in its time that anything feels dated, right down to its ’90s version of ’70s nostalgia and its celebrity voice cameos (Demi Moore when she was the hottest actress in Hollywood and Bruce Willis before his first comeback).

Even its pre-credit sequences, teasing Beavis and Butt-Head as cool, stylish Shaft-like detectives and giant movie monsters, send up audience expectations of needing every blockbuster to be bigger and costlier.

And we wouldn’t be talking about the film at all today if it wasn’t still painfully funny, with a distinctly 2020s nervous energy and a rowdy, bubbling pace that never slows down. South Park would debut the following year, and has been on continuously since then, but its jokes seem rancid after a decade of treading water, while Do America seems far fresher today than anything Matt Stone and Trey Parker have done this century.

It’s hard to remember now, but Beavis and Butt-Head were once extremely polarizing figures, presiding over a moral panic that blamed them — two cartoon characters! — for everything from the death of children to a general societal decline. Nowadays, they would probably produce a slightly more muted level of outrage, and of a different character, but certainly a lot of the jokes wouldn’t hit the same way today. One of the running gags in Do America involves Agent Flemming constantly ordering cavity searches on everyone involved in the search for the Highland Two. The propriety of the joke aside, everything that’s happened in reality since — from Abu Ghraib and Guantanamo Bay to police sexual assault scandals — has rendered it mild in comparison. 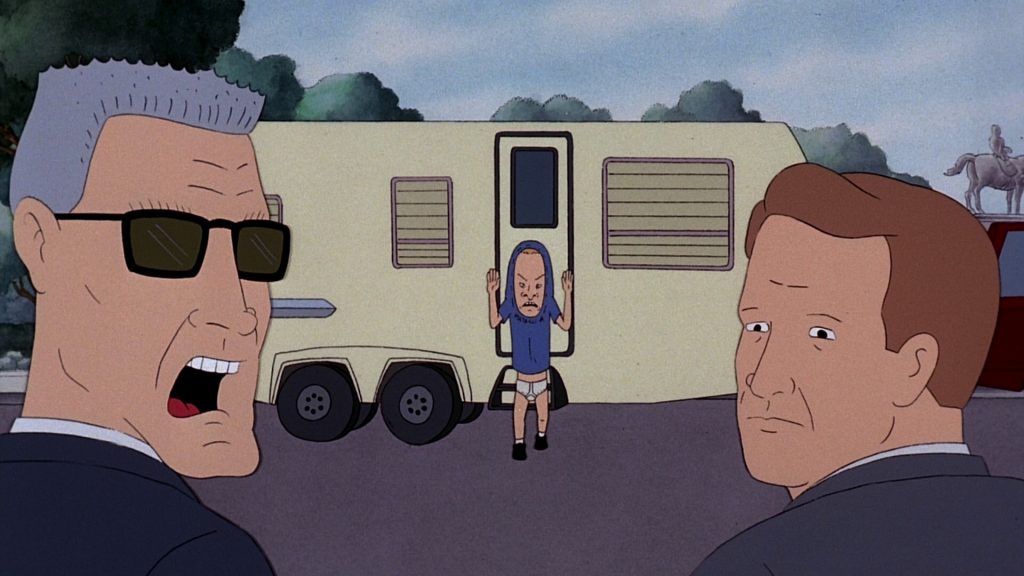 Judge has been remarkably consistent in this. Of course we laugh at Beavis and Butt-Head being subzero morons who are obsessed with boobs and fire. But we’re laughing right there with them, and it’s not just because we’re so much more sophisticated. Their America is our America, and we just keep on doing it with them, over and over again. Getting mad at the duo that US Senator Fritz Hollings infamously referred to as “Buffcoat and Beaver” doesn’t make them look stupid, because they already look stupid, all the time. It makes us look stupid.

As we look back on the greatest satire of the waning days of American empire a quarter century later, we should ask: Did the security state win because Beavis and Butt-Head won? Or was it the other way around?

Leonard Pierce is a Chicago-based writer and editor. He is an organizer with the Democratic Socialists of America and studies the intersection of working-class politics and twentieth-century American culture.