"We believe in a plurinational state and the self-determination of our original peoples." Gabriel Boric, newly elected President of Chile. 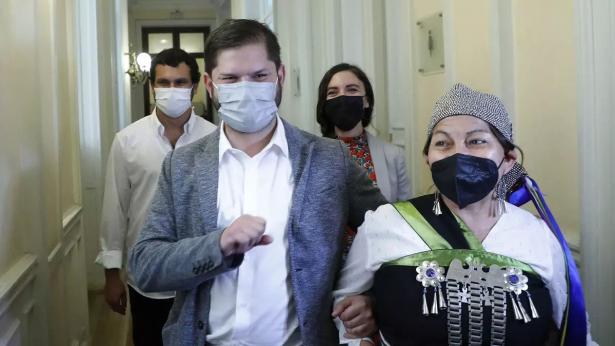 The 12-point victory was achieved despite massive public transit interruptions on Sunday, resulting in long lines at bus stops and polling places during an unprecedented heat wave. Left-wing party members accused right-wing current president Sebastián Piñera of electoral interference since poor and working-class neighbourhoods were mostly affected by the transit outages. Still, voters turned out en masse to break a voter participation record with 55% of the eligible electorate casting their votes.

Boric will be the youngest Chilean president when he assumes office in March 2022 at the age of 36. His early involvement in politics began ten years ago in 2011, during the student protests when he headed the University of Chile Student Federation (FECH). Piñera was also president of the country at the time, and forcefully opposed the protests, which stemmed from extreme inequities in higher education.

The student protests grew and created alliances with labour and other social movements. Hundreds of thousands of people participated, thousands were arrested, some killed and many injured. In 2013, Boric was elected to parliament, representing his home district of Magallanes and Chilean Antarctic. The protests continued, culminating in a mass uprising in October 2019, when high school students climbed turnstiles and waved passengers into the Santiago metro system after the government hiked fares.

The financial success story that is Chile, based on commodities like copper, does not reach most Chileans. Half of residents earn less than 400,000 Chilean pesos (USD$550) a month. A 2017 United Nations study shows that only 1 percent of Chileans earn 33% of the country´s gross national product. The Organization for Economic Cooperation and Development (OECD) ranks Chile in 2021 as its most unequal member, with inequitable taxation, low female participation in the marketplace and weak public spending on children´s education.

At his acceptance speech on Sunday night, Boric greeted the crowd in Spanish, Aymara, Rapanui and the Mapuche national language Mapudungun. In 2014, he was a member of the government's Commission on Human Rights and Indigenous Peoples.

"Thank you to all the persons and peoples who inhabit this place we call Chile. What is important is that you voted, you made your voices heard, you showed your commitment to this country for each and every one of us." In a veiled reference to former dictator Augusto Pinochet, he added, "On such an important day, we cannot go back to a time when the people, for whatever reasons, were deprived of the right to vote."

Boric is a strong supporter of women's rights. Advancing legislation to legalize abortion up to 14 weeks gestation, Boric stated on January 19, 2021, "We must move forward towards legal, safe, free and guaranteed abortion for the public health of the nation… Abortion is an undeniable reality and its prohibition only creates greater inequality between those who can safely access it and those who cannot."

Boric and his Apruebo Dignidad (I Approve Dignity) party won over 60% of the votes in his home province of Magallanes, as well as in Metropolitan Santiago. But Republican Party leader José Antonio Kast reversed the percentage in the wine-growing and agricultural regions of Chile immediately to the south of the capital city.

One of those regions, La Araucanía, where Kast had his strongest showing at 60%, is the homeland of the Mapuche people, who represent a third of the region's population. Tensions have been increasing this year between the Mapuche and landowners, with President Piñera declaring a state of emergency in that region "to confront violence linked to drug-trafficking, terrorism and organized crime."

But the Mapuche say they are fighting the government for rights to the land they have inhabited for centuries if not millennia. Traditionally subsistence farmers, their way of life is in direct conflict with intensive agriculture. Large tracts of Mapuche territory have been granted to non-Indigenous families and corporations, and in the 1980s, the government transferred remaining collectively held land into individual ownership, chipping it away through personal debt and bankruptcy. In March 2021, Mapuche leaders filed a lawsuit with the International Criminal Court in The Hague accusing the Piñera government of genocide.

So when Gabriel Boric opened his presidential acceptance speech with words in the Mapuche language, he reaffirmed his commitment to solving the crisis in La Araucanía and his longtime campaign promise, "We believe in a plurinational state and the self-determination of our original peoples."

Danica Jorden is a writer and translator of French, Spanish, Portuguese, Italian and other languages.