While many iterations of the friendship sitcom exist, a Black woman invented the genre as we know it today, and a Black woman perfected it in Insecure 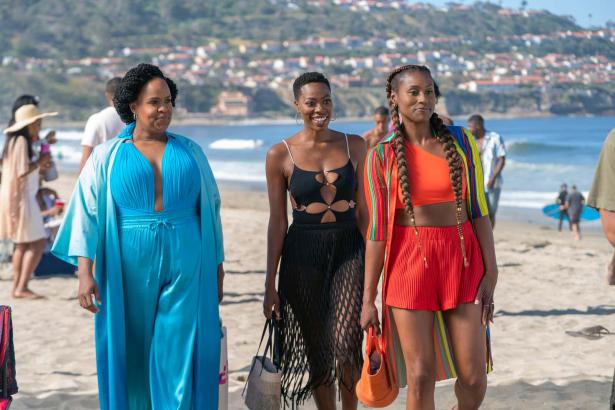 When Issa Rae’s Insecure premiered on HBO in 2016, the need for tight inner circles would become much more urgent. Under a Trump presidency, to be Black and a woman meant a constant sense of impending doom, though the full extent of the damage could not yet be imagined. The words “overreacting” and “sensitive” flew around as the collective memories of ancestors warned us to stay on guard. The best shelter in this storm turned out to be a group chat: Black women of all classes and backgrounds found themselves connecting, struggling to parse together their new reality. Friends helped dam the rage, stop others from walking out of jobs necessary to pay bills, and gently guide one another out of toxic relationships.

Sanctuary was found in the lives of Issa Dee (Rae)’s friends on Insecure: Molly (Yvonne Orji), a.k.a. the best friend everyone needs; intelligent enough to help in a legal fiasco, quick with the hands in a brawl, and charming enough to maneuver through any social situation. Tiffany (Amanda Seales), the bougie friend who knows everybody’s business and can expertly plan any gathering. Kelli (Natasha Rothwell), the side-splitter, the hand holder, the emotional supporter. These women formed the pillars of support for Issa Dee’s vulnerable, terrified, unsure, but ultimately beautifully inspired and daring woman. Her mirror chats, where she raps as her own hype man before stepping out of the safety of her bathroom, articulated the universal humor of leading an insecure life.

Of course, as the series progressed, each friend’s superpower morphed into a shield for their own insecurity. Molly’s assumed fearlessness hid her dread of intimacy. Tiffany’s excessive planning and cheerfulness were a front for her unstable love life. Kelli’s comedy and support masked her substance abuse and, ultimately, her loneliness. As these women faced these challenges, the show became appointment television, drawing hundreds of thousands of viewers, many who simultaneously logged into Twitter to an open group chat of friends gobsmacked at Issa’s latest terrible life choice. They came for communal healing after the heartbreak of love gone wrong. Nostalgia-fueled glee permeated as a song that defined an era played. But mostly, viewers reveled in the joy of a hard-won and time-tested friendship. There were genuine moments when this half-hour comedy invoked healing.

Since Yvette Lee Bowser’s Khadijah housed her wild friends in her luxurious New York apartment on Living Single, which kicked off in 1993 (a full year before Friends), Black friends on television invited young Black adults to compare their professional progress, the sincerity of their lovers, and the strengths of their friendships with what they saw onscreen. It happened again in 2000 with Mara Brock Akil’s Girlfriends: Four women at different professional, romantic, and spiritual stages of life relied primarily on their friendships to get them through the hard times. While many iterations of the friendship sitcom exist, a Black woman invented the genre as we know it today, and a Black woman perfected it with Insecure. For a demographic that can boast most educated in the United States and the least desired for marriage, it’s fitting that decade after decade, Black women revisit and reevaluate these cherished relationships with one another on high-profile shows.

Before Bowser, sitcoms mostly focused on workplaces, educational institutions, or families, with some outliers like The Odd Couple, Three’s Company, and Golden Girls. These shows focused on the absurdity of these people being friends, centered around the final years of life, or relied on sexual innuendo—or in the case of Golden Girls, all of the above. Before the mid-’90s, most people in their late twenties were married with children or divorced. But as young people began to establish careers before walking down the aisle, the role of friends started to take center stage earlier in life. Friends held holiday dinners, watched over parents when they became ill, and stayed up all night after tragedy struck.

Perhaps there was a fifth friend in the Insecure group: the audience. The late bell hooks told us, “Loving friendships provide us with a space to experience the joy of community in a relationship where we learn to process all our issues, to cope with differences and conflict while staying connected.” Issa Dee attempted to escape reality throughout the entire series. She tried to imagine she could say what she really wanted to say to an enemy, or the different possibilities of a career choice, but the moments deeply embedded in reality—her long walk with Molly around their old campus, sitting alone on the couch that once represented the endless possibilities of new love and now presented a conclusive end to that love—linger in the minds of viewers, and challenge them to face their own insecurities.

Insecure showed that doing the internal work leads to the eternal reward of loving friendships. Behind the scenes, it taught Hollywood to look for Black talent because it’s available in abundance. Listen to the impossibly excellent Insecure Playlist on Spotify, or note the ascension of Natasha Rothwell as one of the most promising writer/actors in the industry, or the emergence of showrunner Prentice Penny as a guiding figure in Black television excellence.