The organization, called 1st Amendment Praetorian, is not as well known as the Oath Keepers or the Proud Boys, but it worked closely with pro-Trump forces in the months after the 2020 election. 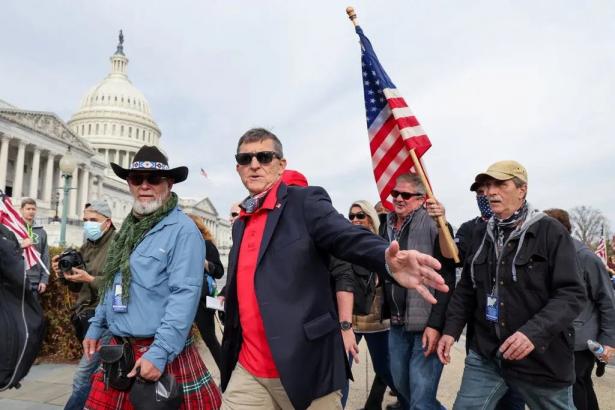 Days after a pro-Trump mob stormed the Capitol on Jan. 6 last year, federal law enforcement officials pursued two high-profile extremist groups: the far-right nationalist Proud Boys and the Oath Keepers militia. Members of both organizations were quickly arrested on attention-grabbing charges, accused of plotting to interfere with the certification of the 2020 vote count.

Now congressional investigators are examining the role of another right-wing paramilitary group that was involved in a less publicly visible yet still expansive effort to keep President Donald J. Trump in power: the 1st Amendment Praetorian.

Known in shorthand as 1AP, the group spent much of the postelection period working in the shadows with pro-Trump lawyers, activists, business executives and military veterans to undermine public confidence in the election and to bolster Mr. Trump’s hopes of remaining in the White House.

By their own account, members of the 1st Amendment Praetorian helped to funnel data on purported election fraud to lawyers suing to overturn the vote count. They guarded celebrities like Michael T. Flynn, Mr. Trump’s former national security adviser, at “Stop the Steal” rallies, where huge crowds gathered to demand that Mr. Trump remain in office. And they supported an explosive proposal to persuade the president to declare an emergency and seize the country’s voting machines in a bid to stay in power.

None of 1AP’s top operatives have been arrested in connection with the Capitol riot, and it remains unclear how much influence they exerted or how seriously criminal investigators are focused on them. Still, the group had men on the ground outside the building on Jan. 6 and others at the Willard Hotel, near some of Mr. Trump’s chief allies. And in the days leading up to the assault, 1AP’s Twitter account posted messages suggesting that the group knew violence was imminent.

“There may be some young National Guard captains facing some very, very tough choices in the next 48 hours,” read one message posted by the group on Jan. 4.

Last month, citing some of these concerns, the House select committee investigating the Capitol attack issued a subpoena to Robert Patrick Lewis, the leader of 1AP. On the same day, it sent similar requests to Enrique Tarrio, the chairman of the Proud Boys, and Stewart Rhodes, the founder of the Oath Keepers.

As part of their inquiry, congressional investigators have obtained numerous audio recordings of 1AP members and are trying to determine how they fit into the broader investigation. Mr. Lewis did not respond to multiple requests for comment, but in recent months he has told parts of his story in online videos and podcasts.

Made up largely of Special Forces veterans and former intelligence officials, 1AP was founded in September 2020 to protect Trump supporters from harassment at rallies and to safeguard free speech rights from “tyrannical, Marxist subversive groups,” Mr. Lewis wrote in a thread of tweets announcing the creation of the group. In a video attached to the thread, he said it would be “a tactical mistake” to discuss how many members 1AP had, noting only that it was several times more than the dozen in a standard Special Forces operational unit.

By the time he founded 1st Amendment Praetorian, Mr. Lewis, who once served as a medic for a Special Forces team, had been out of the Army for a decade and reinvented himself as an author and commentator with an interest in military issues and right-wing politics. Among his works were two action novels describing how the Green Berets saved the American homeland from a fictional invasion and a memoir depicting his rise from poverty and adoption to success in the 10th Special Forces Group, an elite unit stationed in Germany.

1AP’s first “mission” — protecting conservative V.I.P.s — came in October 2020, when the group provided security at a march in Washington led by the Walk Away Foundation, an organization that seeks to persuade Democratic voters to leave the party, Mr. Lewis said in a YouTube video posted that December. The foundation’s leader, Brandon Straka, a former hairstylist in New York, was among those arrested in the Capitol attack. Court papers suggest that he recently began to cooperate with the government.

At that event and others, 1AP provided more than bodyguards, Mr. Lewis said. Its protective detail also included “low-viz operators” dressed in plainclothes moving in the crowd. “We had eyes and ears everywhere,” he added.

As the presidential election drew closer, Mr. Lewis branched out beyond personal protection and started giving interviews, casting himself as a security expert, to right-wing news outlets, including those connected to the QAnon conspiracy theory. Among his claims — so far unsubstantiated — was that “professional analysts” working for 1AP had infiltrated “encrypted forums” visited by members of the loose left-wing collective known as antifa and had discovered plans for a nationwide attack.

“Our intelligence shows that no matter who wins the election, they are planning a massive ‘antifa Tet offensive’ bent on destroying the global order,” he told Fox News two days before Election Day.

Once the votes were cast, Mr. Lewis turned his attention back toward guarding pro-Trump luminaries at rallies in Washington, where throngs of people showed up in support of the lie that the election had been rigged. One of his clients was Ali Alexander, a prominent “Stop the Steal” organizer, who was a featured speaker at the so-called Million MAGA March on Nov. 14, 2020. (Mr. Alexander has since given testimony to the House select committee.)

Around the same time, 1AP became involved in another project connected to challenging the election. Members of the group, as Mr. Lewis put it in his video in December, began to scour the internet for “OSINT” — or open source intelligence — about allegations of election fraud. Whatever evidence they found, he said, they sent to Sidney Powell, a Dallas-based lawyer who filed four federal lawsuits in late 2020 contesting the results of the presidential vote.

The lawsuits, which ultimately failed and resulted in a federal judge imposing sanctions on Ms. Powell, described without any credible evidence a plot by a cabal of international powers to hack U.S. voting machines and flip the count away from Mr. Trump.

By mid-December 2020, 1AP took a job protecting one of Ms. Powell’s former clients, Mr. Flynn, at a second large pro-Trump rally in Washington. The rally was put together, public permits say, by Cindy Chafian, an organizer for the pro-Trump group Women for America First, which arranged for caravans of the president’s supporters to rally across the country after the election. (Ms. Chafian has also been subpoenaed by the House select committee.)

This rally — on Dec. 12, 2020 — helped to solidify 1AP’s relationship with Mr. Flynn and Ms. Chafian. It also brought the group into contact with the Oath Keepers, who joined their protective detail, according to a television interview that the militia’s leader, Mr. Rhodes, gave that day.

In the interview, Mr. Rhodes described how the two groups worked together at the rally. He then urged Mr. Trump to “wage war” against “traitors” at home by imposing martial law. That was the same message that Ms. Powell, Mr. Flynn and others in their orbit were advising at the time.

Mr. Lewis says he played his own small part in the effort to persuade Mr. Trump to declare martial law. On Dec. 18, he said on a podcast last year, he drove Ms. Powell and Mr. Flynn to the White House to meet with Mr. Trump. It is not clear whether Mr. Lewis attended the meeting, where Ms. Powell and Mr. Flynn urged the president to declare a national emergency and demand a recount of key swing states on live TV, according to the business executive Patrick M. Byrne, who was also there.

It was not long after the White House meeting that Mr. Lewis, like others, turned his attention toward Jan. 6, which was widely seen as the final opportunity for Mr. Trump and his allies to stop the certification of the presidential vote.

On Jan. 5, Mr. Lewis gave a speech at an event organized by Ms. Chafian at Freedom Plaza in Washington, telling the crowd that they should not be “intimidated” by the “enemy at the gates.” Another organizer of events that day, Dustin Stockton, said that he saw Mr. Lewis and Ms. Chafian with other members of 1AP in a room at the Willard Hotel, not far from the “war room” where some of Mr. Trump’s top allies had gathered.

On the day of the Capitol attack, at least one of Mr. Lewis’s lieutenants, Geoffrey Flohr, a former Michigan police officer, was outside the building walking the grounds and talking on his cellphone just before the riot erupted, according to public videos. (Mr. Flohr did not respond to messages seeking comment.) Ms. Chafian and her husband, Scott Chafian, were also in the mob outside the building.

Another member of 1AP posted on Twitter that afternoon, claiming he was in an “overwatch position” in Arlington County, Va., where prosecutors say the Oath Keepers had placed at a hotel an armed “quick reaction force” that was prepared to move into Washington if needed.

As for Mr. Lewis, he told The Daily Beast last year that he was at the Willard again on Jan. 6, away from the chaos at the Capitol.

“Today is the day the true battles begin,” he wrote on Twitter just as the Capitol was breached.

Alan Feuer covers courts and criminal justice for the Metro desk. He has written about mobsters, jails, police misconduct, wrongful convictions, government corruption and El Chapo, the jailed chief of the Sinaloa drug cartel. He joined The Times in 1999. @alanfeuer