Why Isn’t the World Vaccinated as Omicron Spreads Like Wildfire? Blame Rich Countries.

Big Pharma and cowardly leaders in the Global North have left poor countries vulnerable to the most contagious Covid variant yet. 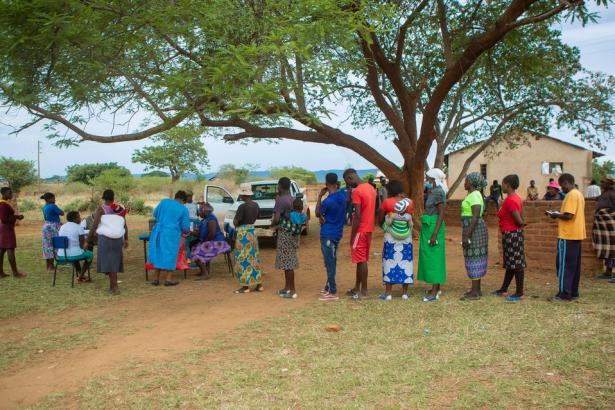 As the world braces itself for the spread of Covid-19’s highly transmissible omicron variant, more than a few questions remain unanswered. To what extent will waning immunity from vaccines leave people vulnerable to severe disease? Could these things grow worse in the future, with other yet-to-emerge variants?

What omicron demands as far as mitigation strategies, as well as the threat posed to vaccinated people, is up for debate. Here’s what isn’t: No matter how you slice the data, it is overwhelmingly safer to be vaccinated than it is not to be, and it’s preferable to live in communities with as much immunity as possible. But billions of people around the world are facing the most contagious variant yet without the protection conferred by a vaccine. While in many rich nations, a largely politicized vaccine hesitancy has appeared to impose a ceiling on vaccination rates, vaccination campaigns in poorer ones have been encumbered much more naggingly by an ongoing lack of access—reflecting a persistent failure on the part of the United States and peer nations to take necessary action to get shots in arms around the world. It’s absolutely urgent that we do so.

Around 57 percent of the population of Planet Earth has now received at least one dose of a Covid-19 vaccine, but those doses have been distributed shamefully unequally: While the U.S., Canada, China, Western Europe, and many countries in Asia have vaccination rates well over 70 percent, poorer countries have only immunized around 6 percent of their populations on average. In the fall, over 50 countries fell short of a World Health Organization goal for every state to vaccinate at least 10 percent of its residents; now several dozen aren’t on track to clear a 40-percent threshold by the end of this year.

While there are many reasons for these disparities—including, in some instances, the same vaccine hesitancy that bedevils wealthier nations—the shortfall essentially boils down to an outsize deference to pharmaceutical profits. Private companies retain both the intellectual property, or IP, rights that spawned the vaccines and the technological know-how to produce them in mass quantities, rendering it impossible to simply manufacture enough doses to get them to everyone who needs them. Widespread demands to bust patents on the vaccines—which would require a rules waiver from the World Trade Organization—were ultimately taken up by President Joe Biden back in May. But between Angela Merkel’s fervent opposition and Biden’s failure to subsequently respond to this impasse with forceful arguments, momentum along those lines appears to have stalled.

There’s a certain type of smug pundit that repeatedly throws shade on activists’ focus on loosening IP protections, arguing that the real limitation is manufacturing capacity—not patents. While breaking patents certainly won’t magically create vaccine equity on its own, the assertion that insufficient manufacturing capacity is what’s causing drag on the global vaccination effort—rather than not having an open-source vaccine recipe reliably at hand—is disingenuous at best. In a recent investigation, The New York Times identified 10 major facilities that could conceivably be used to churn out doses in droves, and which almost certainly could have been doing so for months had the necessary tech secrets been disseminated in alignment with public health needs rather than endless buckraking.

Surely the richest governments on Earth—the ones which largely financed both the development of the vaccines and placed massive orders that made these shots the most profitable pharmaceutical products in history—could have parlayed their power and resources into expanding manufacturing capacity to ramp-up availability as quickly as possible, earning the goodwill of the world along the way. Curiously, they did not! Instead, they essentially tried to navigate their way out of the increasingly unsavory optics of vaccine apartheid through wan charity efforts: donating doses through the United Nations Covax program on a relatively disjointed, ad hoc basis.

But Covax has been a colossal failure, getting fewer than a billion shots out to low-income countries—less than 50 percent of its goal. And not having consistent, scaled-up supply at the ready seriously hampers vaccine efforts: Donated doses are tougher to move and only really end up in needful hands on those rare occasions where a sudden flare-up of benevolence unexpectedly breaks out. This makes it nearly impossible for the nations that need the vaccines the most to execute a plan to disseminate them, which in turn drives considerable waste. Just this week, Europe sent Nigeria a million doses of AstraZeneca that were so close to their expiration date that they ended up being unusable.What’s the point of a vaccine program that does little more than force developing nations to be the middleman between mammoth pharmaceutical companies and the garbage can? 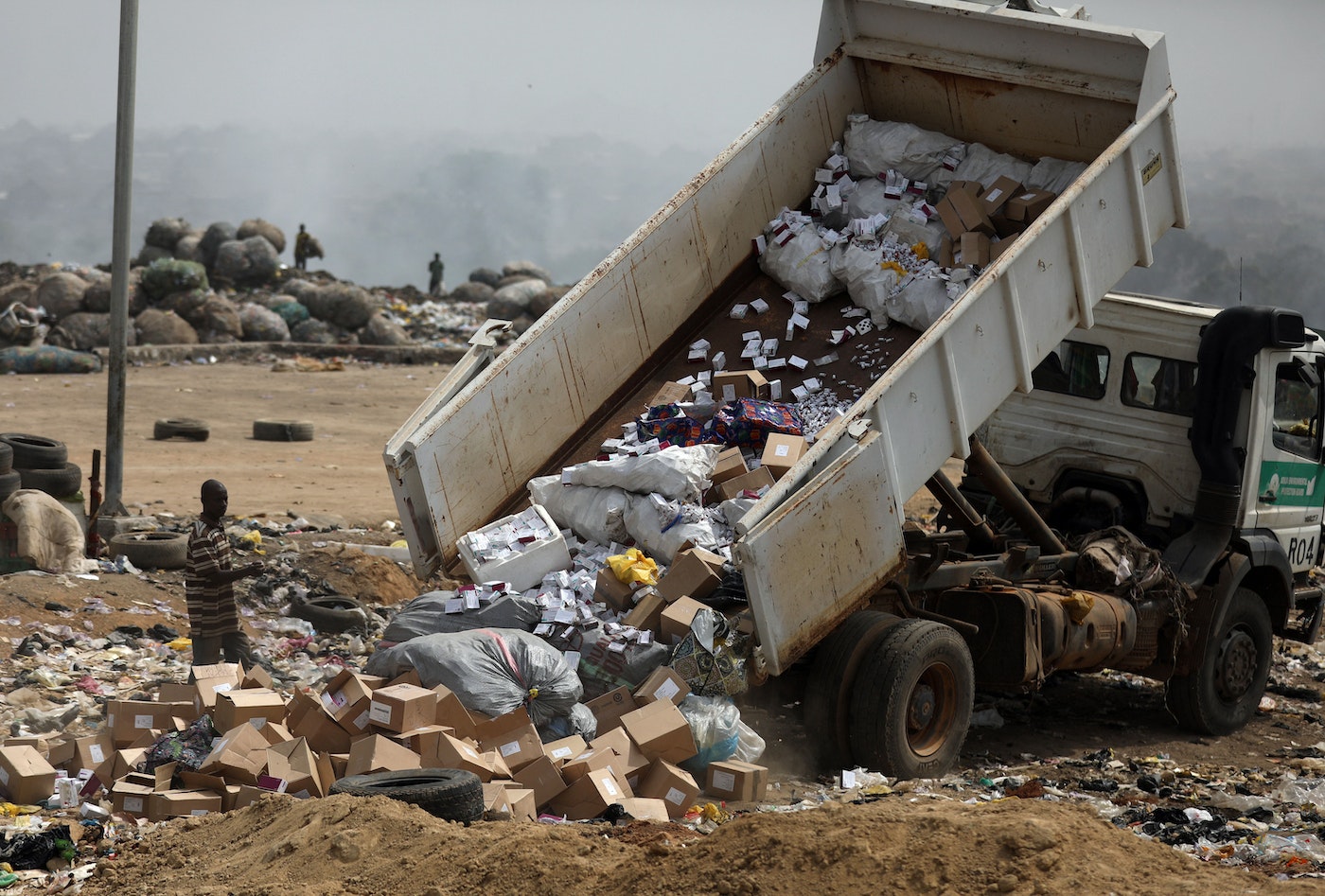 A truck offloads expired AstraZeneca vaccines at the Gosa dump in Abuja, Nigeria, on December 22.

Rich countries have conspired to protect business interests by insisting that the best way to get vaccines to residents of poor countries isn’t to suspend IP protection and bolster manufacturing capacity, but for rich countries to simply hand off their castoffs—a laughably inadequate plan whose benchmarks they failed to even meet halfway. Meanwhile, well over the amount of time that even Big Pharma’s estimates suggested manufacturing facilities would need to get their vaccine operations running has passed since they declared it unfeasible. And the wealthy countries that sided with the industry keep ordering more and more shipments of booster shots for healthy people, further diverting the supply they never should have constrained to begin with.

To preempt the smug op-ed writers preparing follow-ups to their “Overriding intellectual property law won’t fix vaccine inequality”–takes from earlier this year: It’s true that no single measure will instantaneously move shots around the world. But what is required is a massive international commitment to the task, backed with billions of dollars and the necessary policy changes to seed manufacturing capabilities throughout the global south so they can produce enough vaccines to protect against the current pandemic and guard against future variants—and perhaps even future diseases. Two years into this pandemic, we’ve established beyond a shadow of doubt that public health emergencies demand a robust public sector response. Only governments can pour billions into research, implement mitigation policies, mobilize resources for support and survival, and coordinate institutional responses. Too often, they’re terrible at doing so because they can’t bring themselves to go against the interests of private companies. When it comes to vaccines, they ought to. And for so much else, too.

Natalie Shure is a writer and researcher in Boston. Her work focuses on history, health, and politics.