labor Children Belong in School. That’s Why We Support the Chicago Teachers Union.

The eminently reasonable demands of Chicago teachers for a safe return to work have been met with a lockout and media attacks. They deserve our solidarity. 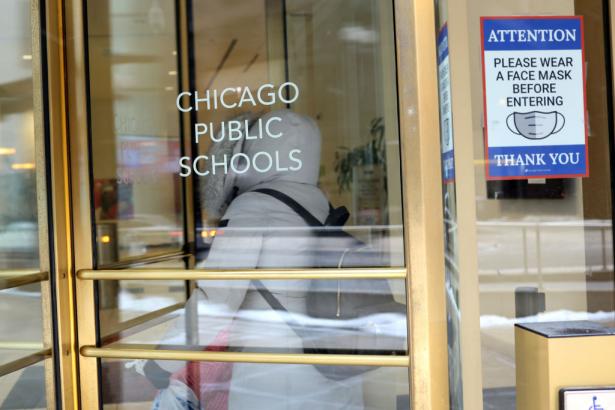 The entrance of the headquarters for Chicago Public Schools on January 5, 2022 in Chicago, Illinois.,(Scott Olson / Getty Images)

One thing we’ve learned from this pandemic is that children and communities need public school, and that remote learning, long-term, without an end in sight, is harmful for kids. That’s why the mayor of Chicago should immediately meet the entirely reasonable safety demands of the Chicago Teachers Union (CTU), and then open the schools.

Last spring, the CTU negotiated with the city and won a safe reopening for Chicago’s high schools, including a district-wide vaccination plan. Now, they’re demanding a safe in-person return from holiday break, while many school systems around the nation remain remote because of the Omicron variant of COVID-19.

Chicago teachers are asking for robust testing, adequate staffing and substitute teachers, and clear metrics for deciding that a schoolwide outbreak warrants the building’s closure. When Mayor Lori Lightfoot refused to meet their demands this week, their union voted to teach remotely, as a job action, to pressure the city without abandoning their obligation to their students. The city showed its commitment to children, in turn, by locking the teachers out of the remote system.

Lightfoot should immediately end the lockout, meet the CTU’s demands, and allow a short period of remote instruction while sensible safety measures are put in place.

Far from just being about the safety and comfort of teachers, the union’s asks are rational for the public school system as a whole: Without adequate staffing and substitutes, what happens when teachers test positive or get sick? Children will go without school or endure remote days when schools shut down for lack of adults, or else they will attend school without sufficient supervision, which can be a harrowing safety issue in elementary schools. The CTU’s demands are also congruent with public health guidance on how to safely open schools during this pandemic surge — the Centers for Disease Control and Prevention (CDC) says schools must have testing and contact tracing, and the World Health Organization, too, insists on testing, as well as concrete measures to avoid overcrowding.

Health experts also oppose school closures at this point in the pandemic, with all major public health organizations and most epidemiologists saying that the risks of in-person school are outweighed by its benefits. The World Health Organization insisted in June that “schools should be among the last places to close.” That consensus is especially broad now with such widespread vaccination. Remote learning has had a demonstrably terrible effect on students’ mental health, with increasing numbers of children attempting suicide or being hospitalized for mental distress these last two years, and many more reporting anxiety, depression, and behavior problems. As well, by depriving children and communities of so many of the benefits of in-person public school — childcare, health care, counseling, sports, music, art, food, real human beings — remote learning undermines faith in public goods.

Of course, enemies of teachers’ unions — whether the right-wing Wall Street Journal editorial board or media centrists — are using the widespread public exhaustion with at-home learning to score anti-worker political points. They’re wrong. Yes, school is essential, and that’s an argument for, not against, making teacher and staff working conditions safe.

Support for the CTU should not in any way be taken as agreement with those who have insisted on an indefinite extension to remote school, consistently ignored the implications of widespread vaccination, exaggerated the dangers of COVID to children and the risks of community spread through school, minimized the harm of remote learning, and trivialized the essential role of public school, the single most socialized aspect of American public life.

If you have the misfortune, as I do, to follow school policy debates on Twitter, you will, almost daily, see people decrying opponents of school closures as privileged white Karens who hate their children and don’t want them around. Some of these geniuses even mock or blame parents who say their children felt isolated or depressed without school. (Pro tip: you can’t go wrong in assuming that even your political opponents probably love their kids.) It’s amazing to see even some left-wing activists effectively taking the view that social reproduction should be performed only by parents in the home, and that those wanting, needing, expecting, or depending upon a more collective approach to child-rearing must be deficient humans. That’s always been a right-wing stance. Such a view makes sense for conservatives, since they generally support patriarchy and oppose public goods, but it should be at odds with a socialist worldview.

To reopen schools safely in person, however, it helps to have teachers’ unions that advocate for their members’ and students’ safety and that are strong enough to make demands and win. The children, parents, and teachers of Chicago are lucky to have such a union, and they deserve our solidarity. Mayor Lori Lightfoot should end the lockout immediately, meet the CTU’s demands, and let the kids go back to school.