Guantanamo Is an Indelible Stain on America. Biden Must Close It Once and for All

It is a disgraceful legacy that we cannot afford to pass on to future generations. 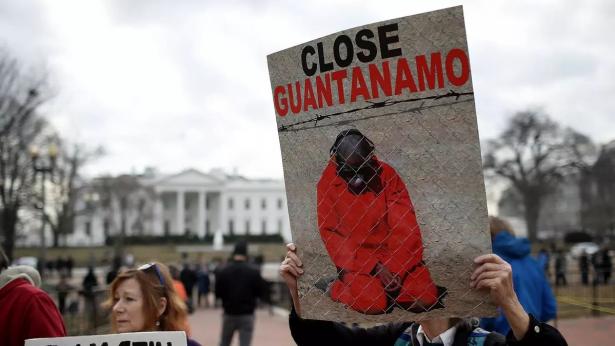 Activists protest the continued operation of the Guantanamo Bay detention camp in front of the White House on January 11, 2018 in Washington, DC., Win McNamee/Getty Images)

At a recent demonstration outside the White House calling for the closure of the US military prison at the Guantánamo Bay naval base on the island of Cuba, a teenager approached a colleague to ask what the protest was all about. He told her he had never heard of the detention facility.

It has been 20 years and four presidential administrations since Guantánamo opened, but for those born since then, its terrifying stories sound more like the plot of a fictitious horror film than reality. It is a disgraceful legacy we simply cannot pass on to future generations.

Opened in response to the September 11 attacks, Guantánamo has held almost 780 Muslim men and boys. Before they were detained, many were abducted, disappeared and brutally tortured in secret US-run prisons or by so-called allies in the “war on terror”. In Guantánamo, they were tortured, very few were charged with crimes, and none given a fair trial. Kafkaesque military commissions set up to try them have proven ineffectual and unfair, denying defendants an impartial arbiter and access to critical evidence. Meanwhile, families of 9/11 victims have waited in vain for justice.

Amnesty International and many others around the world have doggedly campaigned to close the prison since its inception. President Joe Biden, like President Barack Obama before him, has promised to close it, but so far has failed to do so.

The Biden administration transferred one detainee out of the facility in July but has yet to reestablish the special envoy office in the Department of State dedicated to the prison’s closure. On the contrary, the administration has recently announced plans to build a new courtroom at Guantánamo to continue the work by the military commissions – the very opposite of a blueprint to shut the place down.

It is not just about closing Guantánamo. It is also about delivering accountability for the violations committed within its setting. Last year, testimonies from a number of former detainees, including Majid Khan, Abu Zubayda, and Mohamedou Ould Slahi, describing their abuse at US-operated “black sites” abroad and in Guantanamo, were made public. Abu Zubaydah’s story was told in a PBS documentary called, the Forever Prisoner, the torture inflicted upon Slahi, who is now a bestselling author and human rights defender, was portrayed in the film, The Mauritanian, while Khan told a sentencing jury about enduring stress positions, beatings, forced-feeding using tubes tipped with hot sauce, and sodomy with a garden hose.

The European Court of Human Rights has ruled in civil cases against Italy, Lithuania, Macedonia, Poland and Romania for their complicity in the torture and enforced disappearance of people in the context of US rendition and secret detention programs, but there has never been any meaningful accountability in the United States. From those who authorized torture at the highest levels of the government to those who carried out the illegal “enhanced interrogation techniques,” no one has ever been held responsible for the crimes committed. This should begin with the declassification and full release of the US Senate Select Committee on Intelligence’s report on CIA torture.

Thirty-nine men remain in Guantánamo. Thirteen are still under indefinite detention, despite having been approved for transfer out – some over a decade ago. Twelve face charges in the military commissions, while the other 14 are living in a hellish limbo: not yet cleared for a transfer, yet never charged with a crime. Their plight is a relic of the overriding principles that have prevailed at Guantánamo since its inception – cruelty and arbitrariness.

The US government must take swift action to right this wrong: commit to the resolution of each detainee’s case, through their transfer and release without further delay and in accordance with international law. Or if there is sufficient admissible evidence under international law to prosecute internationally recognizable criminal offenses this must be done through fair judicial resolution before a regularly constituted federal court without recourse to the death penalty.

Guantánamo is an indelible stain on the United States’ history, a chapter it must now close and never repeat. President Biden owes it to all of us—those who have experienced or watched Guantánamo with horror over the years, and new and future generations just now learning about it—to shut it down once and for all.

Agnes Callamard is the U.N. special rapporteur on extrajudicial, summary or arbitrary executions and director of Global Freedom of Expression at Columbia University.