Year in Review: 2021 Was a Banner Year For Cultural Workers United 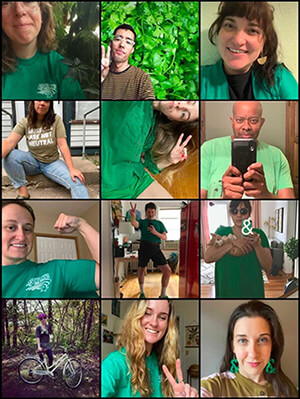 As the COVID-19 pandemic rages on, workers at museums, libraries, zoos and other cultural institutions across the United States are demanding a seat at the table and a voice in boosting pay, improving workplace safety and equity and resolving other longstanding issues exacerbated by the pandemic.

“Public service workers at museums, libraries, zoos, science centers and aquariums are the stewards of cherished community resources,” said AFSCME President Lee Saunders. “For too long, these cultural workers have been underpaid and undervalued, with little ability to raise their voice on the job. But now, there is a nationwide movement of cultural workers standing up to demand the power and protections of a union – and they are finding a home with Cultural Workers United – AFSCME.”

“The organizing momentum in this sector is strong and growing, and we look forward to more successes in the months and years to come,” Saunders added.

From strong contract wins to organizing victories, here are highlights of CWU’s success in 2021:

Walker Worker Union (AFSCME Council 5): In October 2021, workers at the Walker Art Center in Minneapolis unanimously approved a historic first contract that includes major improvements around layoff and recall rights, six weeks of paid family leave (there was none previously) and raises averaging 11% over the five-year contract term.

MOCA Union, (AFSCME District Council 36): Workers at the Museum of Contemporary Art (MOCA), Los Angeles, who unionized back in August 2020, continued their fight for a fair contract last year. While negotiations are still ongoing, MOCA Union has made headway with victories such as a sick leave tentative agreement that gives all bargaining unit employees the right to accrue paid sick leave, a benefit that is especially important during the pandemic. Other tentative agreements will allow union information to be accessible in all work sites and provide employees with 15-minute rest breaks in MOCA-maintained facilities.

PMA Union (AFSCME District Council 47): On the other side of the country, another contract fight has dominated 2021 at the Philadelphia Museum of Art (PMA). Having started contract negotiations in 2020, PMA Union entered 2021 reenergized and ready to fight for a strong and fair contract. Every Friday, the group took to social media and flooded the internet with photos of workers wearing red in solidarity.

MNHS Workers Union (Council 5): An overwhelming majority of workers at the Minnesota Historical Society voted yes by mail ballot and ended the year with recognition of their union in November. The bargaining unit consists of 312 workers who are eager to begin contract negotiations this year.

Niles-Maine District Library (AFSCME Council 31): Last June, nearly 100 librarians, patron support staff and other library workers decided it was time to unionize. Faced with threats to cut funding and reduce staff and programs by newly elected conservative board members, workers filed a majority-interest petition with the local panel of the Illinois Labor Relations Board. Their efforts received widespread support from community leaders, labor allies and local and state elected officials who penned a letter to the library board supporting the workers and opposing cuts to services and staff. By September, the group had overwhelmingly voted to recognize their union under the representation of AFSCME Council 31.

In October, CWU published a report, “Cultural Institutions Cashed In, Workers Got Sold Out,” which investigated whether cultural institutions that received loans through the Payroll Protection Programs (PPP) truly prioritized their workers during the pandemic. The report found that institutions with large endowments and multimillion-dollar budgets received millions of dollars in taxpayer-funded loans, yet collectively furloughed or laid off 14,400 workers. In some cases, many of those same institutions ended fiscal year 2020 with budget surpluses. The data also revealed that unionized workers experienced 28% fewer job cuts and enjoyed more safety protections on the job than their nonunionized counterparts during the pandemic.

Longwood Public Library (CSEA): A total of 89 part-time workers at Longwood Public Library in New York joined their full-time colleagues, who formed a union through CSEA. The part-time workers, who were voluntarily recognized, witnessed their full-time colleagues enjoy paid holidays and other benefits of a union contract and wanted those same same benefits.

2021 served as a big year for organizing in Baltimore. Last year, both Walters Workers United and BMA Union announced their intent to form a union with AFSCME Council 67.

Workers at the Walters Art Museum have since collected over 400 signatures of support from community members and allies, held a rally for recognition and respect and received the support of Baltimore City Council and the city comptroller for a third party union election that would give workers the opportunity to vote yes for a strong wall-to-wall union. Workers from the Baltimore Museum of Art Union received strong support and solidarity from co-workers and supporters after a city council meeting.

As workers who serve the public, employees at both museums ended the year dedicated to securing a union election through the city of Baltimore.

In addition to these campaigns, workers at Oak Lawn, Waukegan and St. Charles public libraries in Illinois, the Kitchigami Regional Library System in Minnesota, Penn Museum, Hillsboro Public Library in Oregon, North Central Washington Libraries, and EcoTarium in Massachusetts have all won their unions.