Bob Dylan, Masters of War, and the Ukraine Crisis

Red-white-and-blue chauvinism is running wild. Yet there are real diplomatic alternatives to the collision course for war 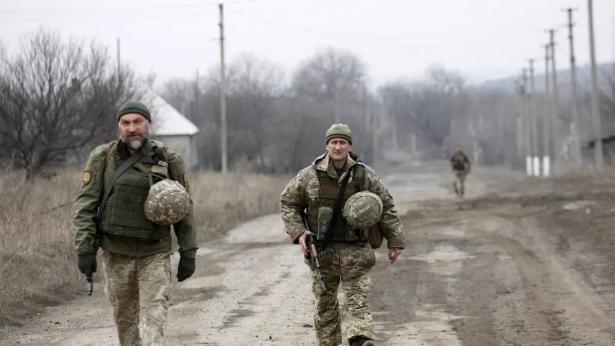 Ukrainian servicemen patrol in the settlement of Troitske in the Lugansk region near the front line with Russia-backed separatists on February 22, 2022, a day after Russia recognised east Ukraine's separatist republics and ordered the Russian army to send,Anatolii Stepanov / AFP via Getty Images

Fifty-nine years ago, Bob Dylan recorded “With God on Our Side.” You probably haven’t heard it on the radio for a very long time, if ever, but right now you could listen to it as his most evergreen of topical songs:

In recent days, media coverage of a possible summit between Joe Biden and Vladimir Putin has taken on almost wistful qualities, as though the horsemen of the apocalypse are already out of the barn.

Fatalism is easy for the laptop warriors and blow-dried studio pundits who keep insisting on the need to get tough with “the Russians,” by which they mean the Russian government. Actual people who suffer and die in war easily become faraway abstractions. “And you never ask questions / When God’s on your side.”

During the last six decades, the religiosity of U.S. militarism has faded into a more generalized set of assumptions—shared, in the current crisis, across traditional political spectrums. Ignorance about NATO’s history feeds into the good vs. evil bromides that are so easy to ingest and internalize.

On Capitol Hill, it’s hard to find a single member of Congress willing to call NATO what it has long been: an alliance for war (Kosovo, Afghanistan, Libya) with virtually nothing to do with “defense” other than the defense of vast weapons sales and, at times, even fantasies of regime change in Russia.

The reverence and adulation gushing from the Capitol and corporate media (including NPR and PBS) toward NATO and its U.S. leadership are wonders of thinly veiled jingoism. About other societies, reviled ones, we would hear labels like “propaganda.” Here the supposed truisms are laundered and flat-ironed as common sense.

Glimmers of inconvenient truth have flickered only rarely in mainstream U.S. media outlets, while a bit more likely in Europe. “Biden has said repeatedly that the U.S. is open to diplomacy with Russia, but on the issue that Moscow has most emphasized—NATO enlargement—there has been no American diplomacy at all,” Jeffrey Sachs wrote in the Financial Times as this week began. “Putin has repeatedly demanded that the U.S. forswear NATO’s enlargement into Ukraine, while Biden has repeatedly asserted that membership of the alliance is Ukraine’s choice.”

As Sachs noted, “Many insist that NATO enlargement is not the real issue for Putin and that he wants to recreate the Russian empire, pure and simple. Everything else, including NATO enlargement, they claim, is a mere distraction. This is utterly mistaken. Russia has adamantly opposed NATO expansion towards the east for 30 years, first under Boris Yeltsin and now Putin…. Neither the U.S. nor Russia wants the other’s military on their doorstep. Pledging no NATO enlargement is not appeasement. It does not cede Ukrainian territory. It does not undermine Ukraine’s sovereignty.”

Whether or not they know much about such history, American media elites and members of Congress don’t seem to care about it. Red-white-and-blue chauvinism is running wild. Yet there are real diplomatic alternatives to the collision course for war.

Speaking Monday on Democracy Now!, Katrina vanden Heuvel—editorial director of The Nation and a longtime Russia expert—said that implementing the Minsk accords could be a path toward peace in Ukraine. Also, she pointed out, “there is talk now not just of the NATO issue, which is so key, but also a new security architecture in Europe.”

Desperately needed is a new European security framework, to demilitarize and defuse conflicts between Russia and U.S. allies. But the same approach that for three decades pushed to expand NATO to Russia’s borders is now gung-ho to keep upping the ante, no matter how much doing so increases the chances of a direct clash between the world’s two nuclear-weapons superpowers.

The last U.S. ambassador to the Soviet Union before it collapsed, Jack Matlock, wrote last week: “Since President Putin’s major demand is an assurance that NATO will take no further members, and specifically not Ukraine or Georgia, obviously there would have been no basis for the present crisis if there had been no expansion of the alliance following the end of the Cold War, or if the expansion had occurred in harmony with building a security structure in Europe that included Russia.”

But excluding Russia from security structures, while encircling it with armed-to-the-teeth adversaries, was a clear goal of NATO’s expansion. Less obvious was the realized goal of turning Eastern European nations into customers for vast arms sales.

A gripping chapter in “The Spoils of War,” a new book by Andrew Cockburn, spells out the mega-corporate zeal behind the massive campaigns to expand NATO beginning in the 1990s. Huge Pentagon contractors like Lockheed Martin were downcast about the dissolution of the USSR and feared that military sales would keep slumping. But there were some potential big new markets on the horizon.

“One especially promising market was among the former members of the defunct Warsaw Pact,” Cockburn wrote. “Were they to join NATO, they would be natural customers for products such as the F-16 fighter that Lockheed had inherited from General Dynamics. There was one minor impediment: the [George H. W.] Bush administration had already promised Moscow that NATO would not move east, a pledge that was part of the settlement ending the Cold War.”

By the time legendary foreign-policy sage George F. Kennan issued his unequivocal warning in 1997—“expanding NATO would be the most fateful error of American policy in the post-Cold War era”—the expansion was already happening.

As Cockburn notes, “By 2014, the 12 new members had purchased close to $17 billion worth of American weapons.”

If you think those weapons transactions were about keeping up with the Russians, you’ve been trusting way too much U.S. corporate media. “As of late 2020,” Cockburn’s book explains, NATO’s collective military spending “had hit $1.03 trillion, or roughly 20 times Russia’s military budget.”

Let’s leave the last words here to Bob Dylan, from another song that isn’t on radio playlists. “Masters of War.”

Let me ask you one question
Is your money that good?
Will it buy you forgiveness
Do you think that it could?