Inside Russian Journalists’ Fight Against Putin’s Invasion of Ukraine

In a country where journalists are regularly arrested and detained for little or no reason, publicly signing a letter opposing the government’s action is a brave thing to do, especially for those who have already been detained for their journalism. 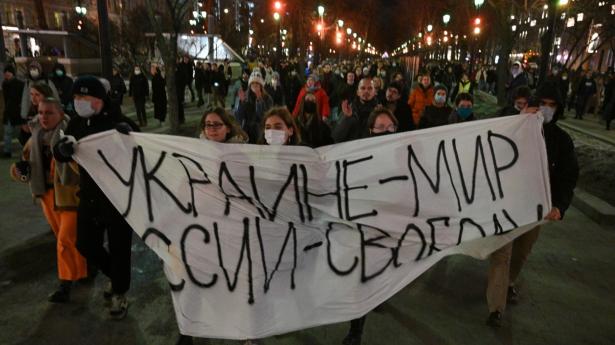 Elena Chernenko, a journalist for the Moscow daily Kommersant, woke up Friday to find out that access to top government officials she’s had for over a decade had suddenly been revoked.

Publishing an open letter not criticizing the government but voicing her opposition to war. Over 280 other journalists signed Chernenko’s letter, including some who are employed directly by the Kremlin at state-run news agencies.

The Kremlin told Chernenko it was removing her access to the Foreign Ministry for “unprofessional” behavior, but the punishment was clearly designed to have a chilling effect on Russian journalists’ outspoken criticism of the war in Ukraine in the last 24 hours.

As Russian forces began building up their numbers close to the Ukrainian borders in recent months, Chernenko wasn’t concerned about war breaking out.

“I was pretty sure from talking to officials here but also to experts that this was kind of a chess game, a diplomatic chess game to force Ukraine and NATO into negotiations,” Chernenko told VICE World News on Friday morning.

Despite her years of experience and role as the head of the foreign desk at the Moscow-based daily newspaper Kommersant, Chernenko was “shocked” to see pictures of Russian troops pouring over the border with Ukraine and bombs dropping on cities such as Kyiv and Kharkiv.

In her shock, she tweeted: “I have no words.”

But that wasn’t entirely true; she had at least 45 words:

“We, correspondents of the Russian media and experts who write about Russia’s foreign policy, condemn the military operation launched by the Russian Federation in Ukraine. War has never been and never will be a method of resolving conflicts and there is no justification for it.”

This is the text of the open letter Chernenko and a colleague penned as the full horror of what was unfolding in Ukraine came into focus.

“This was an idea of mine and another colleague when we saw what had started happening [Thursday] morning,” Chernenko told VICE World News. “We felt that we needed to express our position toward this military operation of our government that we don’t see as justified.”

Initially, Chernenko shared the letter with five or six journalists whom she felt would sign. But by the end of the day, over 280 journalists had put their name on the letter, including some who worked for the state-backed Russian media.

While many outside Russia might view the decision by journalists to put their name to a letter publicly rebuking the Kremlin as brave, Chernenko sees it differently.

The sanctions against Chernenko may be just the beginning of the Kremlin’s crackdown on media and journalists who are not toeing the government’s line, with censorship, denial of access to officials, and even arrests a possibility as the Kremlin attempts to justify its actions in Ukraine to its own citizens.

None of the three responded to VICE World News’ request for comment. However, in Russian media Telegram channels, some of their colleagues are already calling for them to be fired for their public stance, according to Alexey Kovalyov, investigations editor at Meduza, who spoke to VICE World News.

Russia was rated as “bad” when it comes to press freedom, ranking 150th out of 180 countries in Reporters Without Borders’ 2021 Press Freedom Index.

“With draconian laws, website-blocking, internet cuts, and leading news outlets reined in or throttled out of existence, the pressure on independent media has grown steadily since the big anti-government protests in 2011 and 2012,” RSF wrote in its assessment of life under Putin’s rule.

In a country where journalists are regularly arrested and detained for little or no reason, publicly signing a letter opposing the government’s action is a brave thing to do, especially for those who have already been detained for their journalism.

One of those is Ilya Azar, a correspondent for Novaya Gazeta who has covered past conflicts in Ukraine. While he has been detained twice for his work, he didn’t think twice about signing the letter.

“We don’t have many instruments to influence the authorities in Russia nowadays, so we must use every opportunity,” Azar told VICE World News. “There wasn’t any doubt for me to sign this letter. This is very, very far from the required level of pressure on Putin to stop this fucking war, but at least this is something.”

For Kovalyov, the investigations editor, the reasons for signing were straightforward.

“I signed it because I agree with this premise,” he said. “It’s very simple. I am a Russian journalist who covers, among other things, Russian foreign policy, and I can see this for what it is: It’s a war against Ukraine, which is completely illegal, completely illogical.”

For Tatiana Petrushchenkova, a freelance business and technology journalist in Moscow, the reasons for publicly opposing the Russian government were more personal.

“I’m shocked, hurt, and ashamed, and I don’t want to just sit and wait and do nothing,” Petrushchenkova told VICE World News. “My closest friends have relatives in Ukraine, and right now these relatives have to use the subway as a bomb shelter.”

When asked if she was worried about reprisals from the Kremlin for her public stance against the war, Petrushchenkova said: “I didn’t have time to think about it, and I’m not even sure I care. I do not work with state-run media, and as for independent media, life has been hard for them for quite a long time already. It will only be more difficult, and this letter is just a small part of it. Plus, the more people sign letters like this, the less risk there is for one particular person.”

In a chilling reminder to journalists in Russia, Roskomnadzor, the country’s media regulator, posted a message to the media on Thursday reminding them of their “duty” to publish information only from official government sources and the consequences for disseminating “knowingly false information.”

State-backed media are following this directive closely, referring to the invasion as a “special operation” and not as a war, for example.

“Rozkomnadzor said it’s illegal to publish any information that’s not coming from Russian official sources, which obviously we are not doing, so if we’re going to be blocked, it’s probably going to be for that,” Kovalyov said.

Other letters are being circulated inside Russia to raise awareness of the widespread opposition to the war.

Almost 650 Russian scientists and science journalists have signed their own letter condemning the Kremlin’s actions.

Russia’s Trade Union of Journalists, whose co-chair Sofya Rusova publicly protested the war in front of the Kremlin on Thursday, has also published an open letter opposing the war and called on the government to allow journalists to do their job.

Mikhail Zygar, a prominent Russian journalist who is the founding editor-in-chief of the only independent Russian news TV channel, Dozhd, also penned an open letter, which was signed by a dozen high-profile writers, journalists, and playwrights.

Among those who signed Zygar’s letter is Dmitry Muratov, the editor of Novaya Gazeta, who in 2021 won a Nobel Prize alongside Philippine journalist Maria Ressa for his “efforts to safeguard freedom of expression, which is a precondition for democracy and lasting peace.”

In a video published on Thursday, Muratov blasted Putin for warmongering.

“The commander-in-chief spins the ‘nuclear button’ in his hands like a keychain from an expensive car. Is the next step a nuclear salvo? I cannot interpret Vladimir Putin’s words about a retaliatory weapon in any other way,” Muratov said in a video posted to YouTube, adding, “Only the anti-war movement of Russians can save life on this planet.”

Muratov said that his newspaper’s next edition will be published in both Russian and Ukrainian.

The journalists’ public rebuke of the invasion mirrors the actions of thousands of people who took to the streets of Russian cities Thursday night to vocally protest the invasion of Ukraine.

But almost immediately, Russian riot police began stamping out the demonstrations, and by the end of the day Russia had arrested at least 1,745 people across 54 cities, with over half of the arrests in Moscow.

While the Kremlin may be busy with its attack on Ukraine right now, some journalists who signed the list are worried punishment could come some day.

“Maybe the Kremlin now has a blacklist of journalists who signed the letter, and we will have some problems in the future,” Yana Pashaeva, a freelance journalist who works with Reuters, told VICE World News.

For Azar, he’s prepared to suffer the consequences.

“Well, I’ve been [detained] twice for 25 days for my political activities, so I’m ready for everything,” Azar said. “But I don’t expect any reaction from the Kremlin at all. But today, after the impossible—war with Ukraine—happened, one must expect anything to happen.”

Get the best of VICE in your inbox.