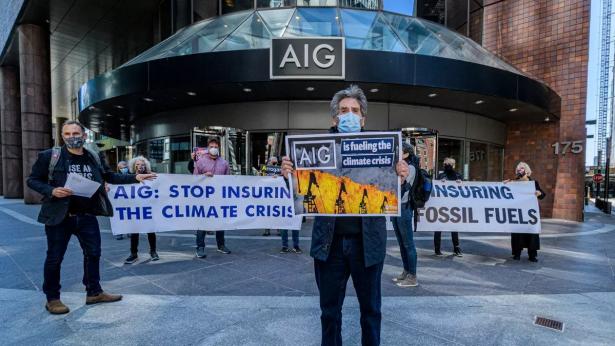 Activists with the Insure Our Future network gathered outside AIG Headquarters in Manhattan during their annual shareholders' meeting on May 12, 2021 to demand that AIG take action on climate change., Erik McGregor/LightRocket via Getty Images

Climate justice advocates celebrated Tuesday in response to insurance giant AIG's announcement that it will no longer invest in or provide insurance coverage for any new Arctic drilling activities nor will it finance or underwrite the construction of any new coal-fired power plants, thermal coal mines, or tar sands projects, effective immediately.

AIG also said that it will immediately stop investing in or underwriting "new operation insurance risks" of coal-fired power plants, thermal coal mines, or tar sands projects owned by corporations that derive 30% or more of their revenue from those industries or generate over 30% of their energy production from coal.

By January 1, 2030 at the latest, AIG said that it will phase out the underwriting of all "existing operation insurance risks" and cease new investments in those clients that still depend on coal or tar sands for 30% or more of their revenue, or coal for over 30% of their electricity generation.

The insurance giant's moves come in the wake of years of pressure from several environmental groups, some of which offered cautious praise following AIG's announcement.

"As one of the last major insurers without restrictions on coal insurance, AIG's new commitments to reduce underwriting for coal, tar sands oil, and Arctic oil and gas are a major step forward for people and the planet," Hannah Saggau, insurance campaigner with Public Citizen, said in a statement. "AIG has vaulted itself from a laggard in the industry to a leader in the U.S., and we look forward to working with it to meet and improve on these commitments."

Ellen Montgomery, director of Environment America's public lands campaign, called Tuesday a "good day for public health, for our climate, and for wildlife."

"We are thrilled that AIG has made the right decision. Insurers are meant to protect against calamity in our society," said Montgomery. "The company is living up to that responsibility by not only turning its back on burning coal, which is one of the dirtiest forms of energy, but also by deciding to take specific steps to protect the Arctic."

"By denying oil companies a safety net for actions that damage a sensitive ecosystem, put the region at risk from spills, and make the climate crisis worse, AIG is both prioritizing a large vital wild space and the health and future of our world," she added. "Without insurance, you cannot drill for oil, so we hope that other insurance companies will follow the lead of AIG."

For more than a year, progressive campaigners have used direct actions, petition drives, policy advocacy, and behind-the-scenes pressure targeting AIG and its CEO, Peter Zaffino, to demand an end to the financial institution's support for fossil fuel expansion amid a worsening climate crisis.

According to Public Citizen, AIG joins nearly 40 companies that have committed to end or restrict insurance for new coal projects, including Travelers, which recently adopted a policy. Among the major U.S. insurance companies examined in Insure Our Future's 2021 Scorecard on Insurance, Fossil Fuels, and Climate Change, only Berkshire Hathaway and W.R. Berkley have yet to implement restrictions on underwriting coal.

As the Gwich'in Steering Committee—formed in 1988 in response to proposals to drill for oil in the coastal plain of the Arctic National Wildlife Refuge—pointed out, AIG is the first U.S. insurer "to publicly issue a policy ruling out new energy exploration projects in the Arctic," joining "a growing list of international insurance companies."

AIG's announcement "demonstrates continuing momentum towards the recognition of Indigenous peoples' rights by the global insurance industry," said the committee.

According to Environment America, AIG is also joining "the six largest banks in the United States and Canada's five largest banks in declining to help oil and gas companies do business in the Arctic."

AIG's commitment includes "any new exploration in the Arctic National Wildlife Refuge, which saw its first lease sale in January 2021, and expands beyond the refuge to include the Western Arctic—much of which has been leased to oil companies," the group noted.

Dyani Chapman, director of Alaska Environment, a state partner of Environment America, said that "in the Arctic, permafrost is melting and sea swells are getting bigger. When you combine those factors with the long-documented challenges of extracting fossil fuels in the best of conditions, it's clear the environmental risks of drilling in the Arctic are too high to tolerate. We're glad to hear AIG agrees."

The Gwich'in Steering Committee, however, argued that "while this policy provides increased protection for our sacred lands, it does not clarify the geographic coverage of the policy, nor does the company include a fulsome commitment to protect the human rights of Indigenous peoples wherever there are impacts. A more fulsome policy would also include a commitment to operationalizing Indigenous peoples' right to free, prior, and informed consent."

AIG's newly unveiled policies are part of its promise to attain net-zero greenhouse gas emissions across its underwriting and investment portfolios by 2050, or sooner. The insurance giant said that it will use "science-based emissions reduction targets" to meet the Paris agreement's more ambitious goal of limiting global warming to 1.5°C above preindustrial levels by the end of the century.

Net-zero pledges have come under fire from climate justice advocates, who argue that they are "premised on the notion of canceling out emissions in the atmosphere rather than eliminating their causes."

If powerful entities are permitted to continue with business-as-usual in some places as long as they fund projects that purportedly slash pollution in other places, there is little to no evidence that overall emissions will be sufficiently reduced, say critics. Recent research shows how the ambiguous term has helped corporate actors embellish their climate progress.

In its press release, AIG vowed to share more details in the coming months about its plan to curtail certain types of fossil fuel extraction and to provide transparent reporting of its progress.

Critics pushed AIG to improve its planned phase-out by curbing every form of fossil fuel extraction, including pumping the brakes on projects that are already underway.

Although AIG "ruled out insurance for the construction of any new oil sands projects," noted Public Citizen, "it is not clear if this includes tar sands transport projects like the Trans Mountain expansion," which AIG is underwriting, as the most recently publicly available insurance certificate shows.

The Canadian pipeline is "a major environmental hazard and a violation of First Nations' rights, and its expansion project consists of an entirely new pipeline that would ship more than 590,000 barrels per day of highly polluting tar sands crude oil to the coast of British Columbia," Public Citizen explained.

Charlene Aleck, a spokesperson for the Tsleil-Waututh Nation Sacred Trust Initiative, argued that "AIG's commitment to rule out insurance for some tar sands projects is a first step but not enough."

"The Trans Mountain pipeline violates Indigenous rights and threatens our land, water, and climate," said Aleck. "AIG must wake up to the significant financial, reputational, and environmental risks of the highly polluting tar sands sector and explicitly rule out insurance for all new tar sands transport projects."