Tucker Carlson’s scramble to reset his commentary on Putin and outrun his past defense of the Russian regime's actions points back to a simple axiom: he will defend the indefensible up until the moment he faces consequences. 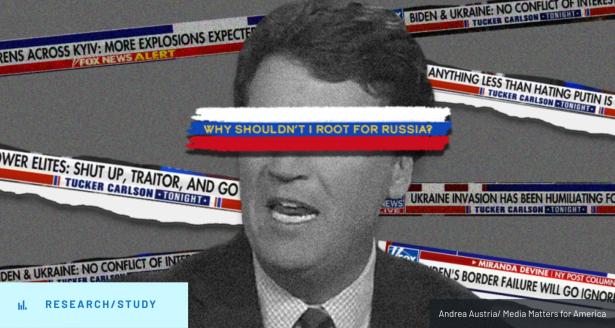 As Russian missiles rain down across Ukraine, Fox News finds itself scrambling to find its footing after weeks of downplaying the mounting crisis and shifting blame for escalating tensions away from Russian dictator Vladimir Putin. Among Fox’s cacophony of coverage throughout the last month, Tucker Carlson’s voice once again rang the loudest.

In 2019, Carlson exclaimed on air that he was, in fact, “root[ing] for Russia” in what was then a simmering conflict in Ukraine, before quickly backtracking when the comment drew immediate backlash. Carlson would eventually argue to his viewers that “we should probably take the side of Russia if we have to choose between Russia and Ukraine.”

As the possibility of a full-scale invasion of Ukraine by Russia escalated from a theoretical possibility to an impending crisis, Carlson insisted that Russia’s military buildup and the looming threat of war were fundamentally inconsequential to American national interests. Carlson levied a steady campaign against intervention on behalf of Ukraine, downplaying reports from the intelligence community and decrying conversations about possible interventions as hysteria by warmongers desperate to lead America into another quagmire like the recent wars in Iraq and Afghanistan. He further attempted to frame the Ukrainian government as an authoritarian regime undeserving of American sympathies. Carlson’s efforts to downplay Russia’s threat to Ukraine, and his repeated justification of the impending invasion, were significant enough for Russian state TV to air them as part of its domestic propaganda.

A horrific armed conflict now ravages Ukraine and threatens the stability of Europe, the Russian leadership has floated the threat of nuclear retaliation against Ukraine’s would-be allies. In a pivot that would give most people whiplash, Carlson’s analysis of the deadly crisis has laid the blame squarely on the shoulders of American leadership. In an absurd segment, Carlson attempted to blame VP Kamala Harris for his years of pro-Kremlin talking points – which dates back in at least one instance to before Harris was even sworn in as a Senator in January 2017.

Carlson also now insists that the Biden administration's failure to intervene in a timely manner, as well as progressive environmental politics, were ultimately responsible for Russia’s unprovoked invasion of Ukraine. Meanwhile, Putin has received little more than a passing condemnation from Fox News’ most influential voice.

The Ukrainian people are fighting for their lives and their country, facing a military superpower. Their enemy has never shied away from committing war crimes or brutalizing civilian populations in order to achieve objectives. (Reports of crimes against civilians and the use of banned weapons have already emerged in Ukraine.) The battles for Ukraine have already been bloody, and will almost certainly result in more devastation and loss of life. Carlson’s scramble to reset his commentary on Putin and outrun his past defense of the Russian regime's actions points back to a simple axiom: Tucker Carlson will defend the indefensible up until the moment he faces consequences.