In 1979, a change was coming. A change in how the NBA was seen. How black stars were celebrated. And how America’s race problem would be televised under the bright lights of the NBA. 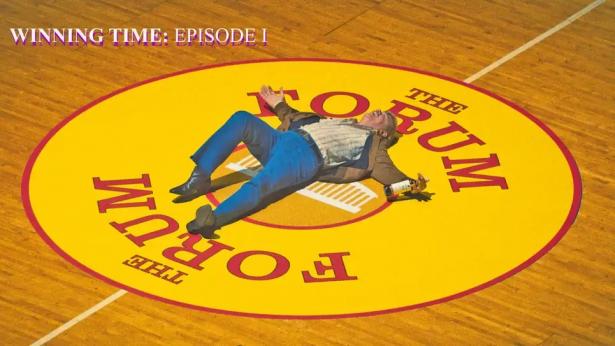 John C. Reilly as Jerry Buss, bottle in hand lays on the for of the Forum,Image: HBO

For Americans, but specifically African-Americans, 1991 was a hell of a year.

A refresher: Rodney King was brutally beaten by a gang of white police thugs. Operation Desert Storm began with American airstrikes against Iraq. Jeffrey Dahmer was arrested after the remains of eleven men and boys, primarily African-American, were found in his apartment. Anita Hill, an African-American woman alleged Supreme Court candidate Clarence Thomas, a Black man, sexually harassed her while working for him.

And to top it off, Los Angeles Lakers point guard Magic Johnson announced he’d contracted HIV, signaling the end of a storied career.

And while HBO’s Winning Time pilot, “The Swan,” which debut’s Sunday, opens on this faithful year — showing Magic and a weepy Lakers assistant receiving the tragic medical news, luckily the episode takes place mostly earlier, in 1979. And in 1979, a change was coming. A change in how the NBA was seen. How black stars were celebrated. And how America’s race problem would be televised under the bright lights of the NBA.

As entertainment, Winning Time, co-created by Max Borenstein and Jim Hecht, challenges the perception of how our most-storied NBA epics came to be. The series takes cues from multiple sources since just about everyone from the Showtime Lakers era has written a book or two. But, mostly it pulls from sports reporter and Deadspin contributor, Jeff Pearlman’s book Showtime: Magic, Kareem, Riley, And The Los Angeles Lakers Dynasty Of The 1980s. By merging all of these varied interests, and subjective truths, Winning Time reveals a story about race, sex, greed, and class as much as it is about basketball. Sounds like the perfect story to be produced by Adam McKay, who directed the pilot episode.

At the heart of this epic are two pillars, Jerry Buss, played with con-man charm by John C. Reilly, and Magic, portrayed by newcomer Quincy Isaiah. Each was instrumental for what the Lakers would become. Under Buss’ stewardship, the Lakers, and eventually the NBA, would become an essential epoch of pop culture. Buss integrated sex and Hollywood into the sport, with Earvin “Magic” Johnson as his avatar for all things excess. On the court, Magic would dominate every player, including his teammates, with one exception — his binary opposition Larry Bird. The contrast of the way Bird and Magic played is mirrored in how the media spoke about each.

Off the court, all of Magic’s charisma and skill earned him the attention of every sin his Seventh Day Adventist mother warned him about. This excess would lead to the situation Magic finds himself in the series-opening scene: in a waiting room of a doctor’s office, staring at the supposedly pristine marriage of the NBA’s next big star — Michael Jordan. But before the darkness of 1991, Magic has a whole life to live, on and off the court.

Part of that life was his job, playing basketball better than anyone else on the planet. The league Magic entered was rife with drug addiction, low ratings, and apparently too many black faces and names for white advertisers and fans to give a damn about. The Association had yet to reckon with its racism. Buss, never afraid of a gamble, bought low to sell high. And once he drafted Magic with the first overall pick in ’79, he had the genuine article, one that sold itself.

The pilot follows Magic as he navigates the white waters of the draft, like eating exotic fish with old white men who call him boy. He also schmoozes at cocaine-filled parties hosted by SOB and future Clippers owner Donald Sterling. But most importantly, he gets to meet his teammates, including incumbent Lakers point guard and All-Star, Norm Nixon, whom he battles in a game of one-on-one at Sterling’s house, while Nixon wears a mink coat and mocks Magic’s humble Michigan roots. After beating Magic, he walks away, but not before looking down at a wide-eyed Magic and calling him “boy.”

This is followed by a montage of a young Magic and his father, Earvin Sr. — played by a scene-stealing Rob Morgan — driving around in the elder’s garbage truck in Lansing. It’s a poignant and poetic reminder of what Magic is trying to escape. It peels back the layers of charm and facade the young point god oozes to reveal a boy who is just trying to do better than his dad. “I don’t want to be Lansing’s tallest garbage man,” the son tells the father. Just like a young Jeannie Buss, who would go on to become the current owner of the Lakers, who wants to not only impress her father but become a better version of him, by being the female version of him.

The show’s sepia-tinged coloring and old-school aesthetic mix strangely with the fourth-wall breaking and handheld zooms, two penchants of anything with McKay’s name on it. After only one episode, it’s hard to say whether it works or not, but it does invoke a hallucinogenic feeling. The whole episode feels like an ode to surrealist comedy, 8 ½. Fellini’s masterpiece also deals with a man in a mid-life malaise, trying to find a muse for his creativity. For Buss, his “ideal woman” is turning basketball into a fusion of flash and fake-it-till-you-make-it panache. As Buss describes basketball in his introduction, “it’s sexy!” By the end of the episode, when Magic comes to Buss’ office to reveal his doubts about making it in the league, Buss wisely let’s the mystical halls and shiny floor of the Forum do the talking.

Toward the end of the episode, when Magic stands in the middle of The Forum and stares up at the rafters, he’s not just looking at his future, he’s looking at the future of the NBA, too.