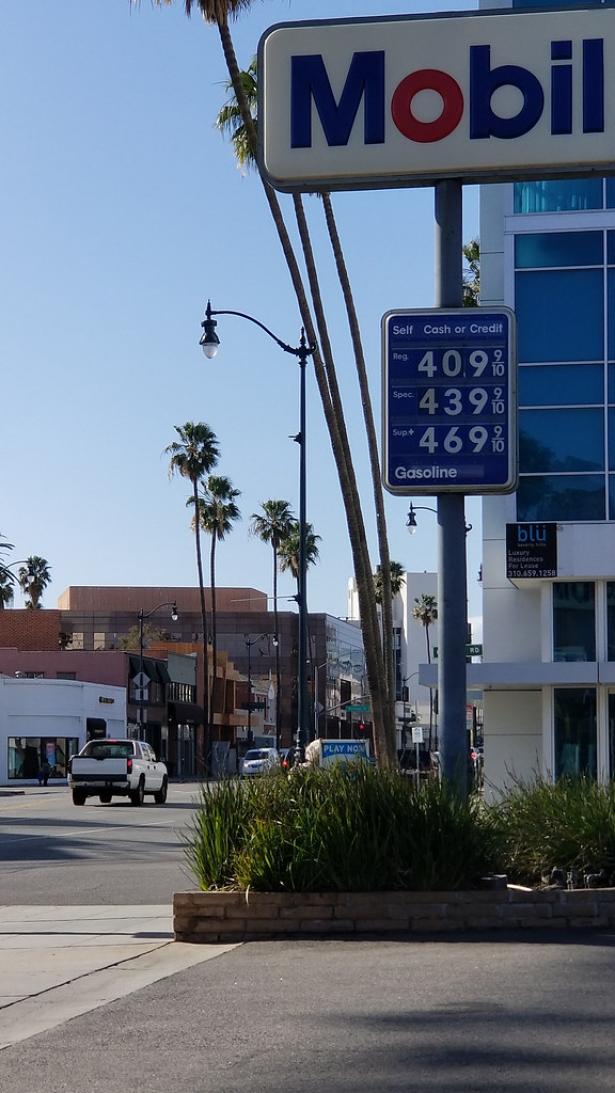 Likely voters across the country view rising prices as the top economic issue and central to their lives.

A February national Gallup survey found 49% of Americans say rising prices have caused hardship for their family. The same survey found that two-thirds of adults making less than $40,000 and 56% of middle class Americans reported that rising prices are causing them at least moderate hardship.

83% of registered voters in a February CNN/SSRS poll said inflation was extremely or very important in their vote for Congress this year. Higher prices ranked above crime, the pandemic, health care, taxes and education.

Gas prices are likely to rise even higher due to Russia's invasion of Ukraine. It should be assumed that the public will feel even greater economic pain and frustration, making it even more important and powerful for leaders to speak directly about confronting corporate greed and profiteering to lower prices.

Before presenting any persuading arguments, 82% of voters agreed “Prices are in-part rising because big corporations are jacking up prices, and passing higher costs to consumers while making record profits. Elected officials must take on powerful CEOs and rein in corporate greed to lower prices.” 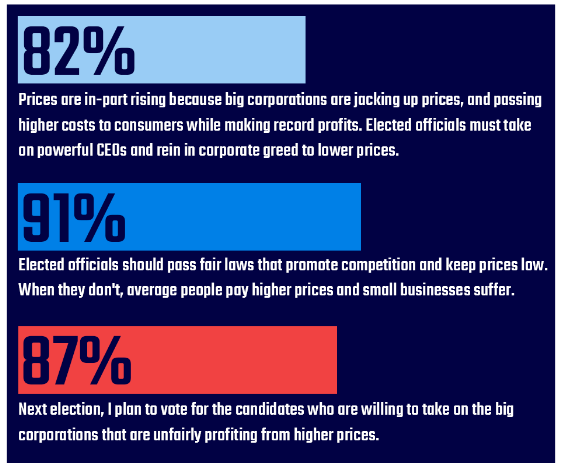 The 1,000 sample size poll also found 91% agree that “elected officials should pass fair laws that promote competition and keep prices low. When they don't, average people pay higher prices and small businesses suffer.” Similarly, 87% agree “next election, I plan to vote for the candidates who are willing to take on the big corporations that are unfairly profiting from higher prices.

54% of voters said that little competition among some large companies is responsible for inflation according to a 2022 Morning Consult/Politico poll. This includes 63% of Democrats, 47% of Republicans, 50% of Hispanic voters, and 49% of Black voters. An analysis of persuadable voters by Navigator / GBAO / Global Strategy Group found corporate greed as the most convincing reason for rising prices. 66% of voters found that “as the economy reopens and demand surges, big corporations have taken advantage, squeezing consumers for profit and raising costs that everyday Americans face. Their corporate greed is the reason American families and small businesses are seeing costs in their everyday go up,” as the most convincing argument.

A previous poll from Fight Corporate Monopolies found 77% of Americans, including 80% of people making $49,000 or less, agree that “Elected officials must act to prevent big corporations from hurting Americans.”

Women voters were moved +11 and voters with some college education were moved +17 to agree that elected officials must take on powerful CEOs and rein in corporate greed to lower prices after hearing: Decades of mega-mergers have left us with a handful of big corporations that no longer have to compete for your business. This has made it easy for them to charge you whatever they want. During periods of inflation, these big corporations can charge you more because you don't have other places to take your business.”

Moderate voters and voters aged 35-54 were both moved +11 to agree thatelected officials must take on powerful CEOs and rein in corporate greed tolower prices after hearing: “Ever since inflation began to rise, the CEOs ofmultiple big corporations have openly bragged that they are passing along allof their price increases to consumers.

While we pay more for goods,companies and their shareholders rake in record profits. For example, an executive at 3M (one of the largest mask manufacturers in the world) recentlysaid on a call with shareholders that the corporation has ‘done a marvelousjob in driving price.’ While Americans struggle to keep up, corporate CEOs aremaking massive profits.”

Suburban voters were moved +14 to agree that elected officials must take on powerful CEOs and rein in corporate greed to lower prices after hearing: “For decades, politicians have protected big corporations at the expense of local small businesses. Now that there are fewer small businesses in town, the big corporations that are left can charge you high prices without fear of losing your business. Inflation has given them an excuse to do just that.”

These messages moved voters even in the face of counter-arguments that said inflation is being caused by “endless government spending and regulations.”

When making the argument that big corporations and CEOs are driving higher prices, leaders can find ample evidence to build more convincing arguments from public comments by corporate leaders on pricing and record profits.

● 3M’s CFO Monish Patolawala stated on an earnings call that, “the team has done a marvelous job in driving price.”

● P&G CFO Andre Schulten described raising prices without consequence, “I will tell you for those price increases that have gone into the market in the U.S., most of them became effective middle of September and we have not seen any material reaction from consumers in terms of volume offtake.”

bragged about capturing higher selling points, "we achieved our highest fourth quarter revenue in nearly 10 years as demand for our products remained strong and we captured higher selling prices.”

● Unilever CEO and Executive Director Alan Jope promised more is to come, “we stepped up pricing significantly in a heavily inflationary environment while delivering strong earnings. We will, of course, continue to take further price increases.”

In addition, McDonald’s announced plans to raise prices despite record revenue, BP credited soaring commodity prices for their highest profits in 8 years, Tyson has made record profits as the cost of meat has skyrocketed, and Amazon’s stock soared 15% after announcing higher fees for Prime memberships.

Voters’ beliefs that corporate greed is driving higher costs is also backed up by economic analysis. A review by Datasembly of 18 key consumer products from Fortune 500 corporations found that 11 products were set at inflation-beating price increases. Companies including Kellogg, Kimberly-Clark, and meatpacking giants JBS and Tyson all had products with price jumps that were higher than the 7.5% inflation rate.

STAKEHOLDERS SHOULD TALK ABOUT MEASURES THAT CHECK CORPORATE GREED

Given the deep concerns voters have with rising prices and their consensus that big corporations are driving prices higher, leaders should speak directly to lowering costs with plans to confront corporate greed and popular policies that can be enacted by Congress.

The two leading policy proposals in a February Economist/YouGov Poll were “provide childcare support to reduce worker shortages” – supported by 51% of voters – and “punish companies participating in anti-competitive behavior” – supported by 44% of voters.

Leaders can speak directly to this by supporting the federal government strongly enforcing antitrust law and multiple bills in congress to break up monopolies.

Congressional bills to limit or break-up Big Tech present a unique opportunity to speak to voters across the political spectrum.

A survey by the Groundwork Collaborative / Data for Progress found “mentioning that corporations are recording record profits is a message that resonates with likely voters nationally.” The most preferred policy solutions tested among women, Latino voters, non-college educated White voters and self-identifying moderates were both “bring back manufacturing jobs in the United States to drive down prices” and “corporations are recording record profits while Americans are paying higher prices ... we need a fairer economy where workers and consumers, not CEOs and shareholders, come out ahead.”

Leaders can also point to federal actions and legislation to lower prices by checking corporate greed:

● The Bipartisan Infrastructure Law strengthened the supply chain to lower prices with investments in ports, roads, waterways, and railroads.

Whether it is popular policy proposals or highlighting recent actions, leaders can directly address voters’ top economic concerns and present a contrast against big corporations.