On “Smoking Guns”—Yesterday and Today (and Tomorrow?)

There is a lot of smoke surrounding Trump’s conduct on January 6: Judge David Carter’s opinion in California holding that it was “more likely than not” that Trump corruptly attempted to obstruct the Joint Session of Congress on January 6, 2021.” 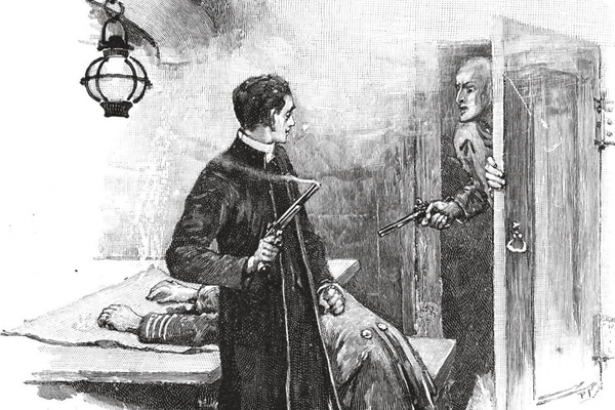 Sidney Paget illustration (1893) of the Sherlock Holmes story "The Adventure of the Gloria Scott," in which the phrase "the smoking gun" originated., Sidney Paget

Prosecutors are always looking for the “smoking gun,” that elusive shred of evidence that conclusively establishes guilt. Attorney General Merrick Garland may be hesitating to indict Donald Trump not out of timidity, but for lack of a “smoking gun.” In Manhattan, fledgling prosecutor Alvin Bragg apparently lost his enthusiasm for a convincing false financial statement case against Trump. He says however, that his “investigation is continuing.” He is doubtless searching for a smoking gun.

Webster defines a “smoking gun” as “something that serves as conclusive evidence or proof (as of a crime or scientific theory).”

The phrase, it is said, originated in 1893 in a Sherlock Holmes mystery entitled “The Gloria Scott.” There, Conan Doyle writes of a chaplain imposter aboard a prison ship who murders the captain. The evidence is circumstantial. ''We rushed into the captain's cabin . . . there he lay with his brains smeared over the chart of the Atlantic . . . while the chaplain stood with a smoking pistol in his hand at his elbow.''

A “smoking pistol” was Conan Doyle’s turn of phrase. But it was close enough to pour the foundation for the cliché which holds currency today. Pundits used the phrase promiscuously  during the Watergate era when a tape surfaced revealing that Nixon sought to cover up  an FBI investigation into the Watergate burglary by having the CIA falsely tell the FBI that the investigation implicated national security. The tape led inexorably to the House drafting articles of impeachment and Nixon’s ultimate resignation.

Smoking guns did not originate with Watergate, and did not end there either. In the  run-up to the 2003 war in Iraq, George W. Bush claimed that Saddam Hussein had weapons of mass destruction. The UN Security Council wanted to see direct evidence or at least circumstantial evidence amounting to a “smoking gun.”

Chief Inspector Hans Blix, in charge of scoping out biological and chemical arms, told the Council: ''Evidently, if we had found any 'smoking gun,' we would have reported it to the Council. . . . The absence of smoking guns . . . is no guarantee that prohibited stocks or activities could not exist at other sites, whether aboveground, underground or in mobile units.''

There is a lot of smoke surrounding Trump’s conduct on January 6: Judge David Carter’s opinion in California holding that it was “more likely than not” that Trump corruptly attempted to obstruct the Joint Session of Congress on January 6, 2021.”

Trump’s  tweet of December 19 to the faithful, inviting them to come to Washington, promising “be there, will be wild,” his continued false claims that he had won the election, although they were rejected in more than 60 court cases, and by Bill Barr, his own right-leaning attorney general who resigned early in disgust, the seven hour gap in the January 6 White House phone logs, and the flap over whether Trump knew about burner phones, let alone used them, and most damning the cooperation agreement of George Donohoe of the Proud Boys admitting that the rioters acted in concert and knew what they were doing was wrong. But, even all this conduct raising eyebrows may not amount to the “smoking gun,” the Holy Grail that prosecutors like to see.

But this past week there occurred a new development, which could be Trump’s smoking gun. CNN broke the story that two days after the 2020 presidential election, as votes were still being tallied, and two days before the  media had called the election for Joe Biden, Donald Trump, Jr. texted then-White House Chief of Staff Mark Meadows, whom Congress has cited for criminal contempt, telling Meadows “we have operational control” to ensure Trump would have a second term. Trump Jr. laid out the strategy followed by Trump’s inner circle in the following months: file lawsuits, advocate recounts to prevent battleground states from certifying their electors, have a number of Republican state houses put forward slates of fake “Trump electors,” and if all else failed, throw the election into the House of Representatives where Trump could expect to win the majority as votes are counted by state delegations.

The text establishes at a minimum that Trump Jr. was in on the planning (of which Trump was doubtless aware) to subvert the choice of the voters in key states and replace them with either phony Trump electors or the electors put forward by Republican legislatures or else kick things over to the House of Representatives where Trump would certainly win 28 states to 22.

Subsequently, John Eastman, a lawyer on the right, proposed a six-step variation on the theme. Eastman elaborated a series of moves whereby Vice President Mike Pence might overturn the election. Judge Carter said that this put Trump and Eastman in the center of a criminal conspiracy to overturn the election.

Prosecutors never feel they have enough evidence to prove even a good case. Nevertheless, the New York Times reported that the January 6 panel believes it has enough evidence for a criminal referral to the Department of Justice alleging that Trump was involved in a conspiracy to defraud the United States, as well as other federal crimes, including obstruction of an official proceeding.

The panel, however, is said to be split over whether to make the referral for fear that it may politicize any eventual prosecution. A criminal reference would not bind Attorney General Garland, but it would ratchet up the political pressure to indict Trump, already reaching fever pitch.  The committee may differ internally about whether it is advisable to make the referral, but they appear of a mind that there is significant evidence of criminality. Vice Chairwoman of the committee, Liz Cheney, a Republican of Wyoming whose conservative roots are second to none, told CNN: “I think…it’s absolutely clear what President Trump was doing, what a number of people around him were doing that they knew it was unlawful. They did it anyway.”

Whether there is a referral or not, Trump and the Trumpists will call any Garland indictment political, so why not refer? We are not a banana republic and are loath to prosecute our former rulers, but if we don’t hold everyone accountable, and give a pass to a former President that we wouldn’t give to anyone else, doesn’t this make us a banana republic as well? Here, no one is—or should be— above the law.

James D. Zirin is a former federal prosecutor in the Southern District of New York.