The Ohio Model for Purging Progressives

A Democratic establishment victory in a House race last year has emboldened big money to upend this primary cycle. 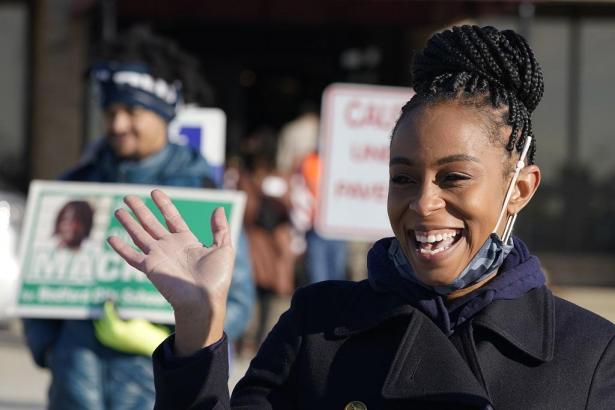 A year ago, the elevation of Marcia Fudge to secretary of housing and urban development created a vacancy in Ohio’s deep-blue 11th Congressional District in Cleveland. Progressives saw it as another prime opportunity, similar to ones they took advantage of in a series of 2020 primaries. The idea was to take shots in favorable seats, challenging moderates and moving the center of gravity within the party. A revitalized progressive campaign infrastructure, candidates that fit the districts in which they ran, and a nationally energized donor network made this possible, and for a minute, the long-term outlook was pretty positive.

But the race in the 11th District saw the first successful counterattack to this strategy, from a group of outside donors who represented the old-guard establishment. Though Democratic Majority for Israel (DMFI) was active in campaigns prior to 2021, including supporting Joe Biden and the ultimately losing campaign of former House Foreign Affairs Committee chair Eliot Engel, OH-11 is where they made their stand, getting behind Shontel Brown in a race against former Bernie Sanders surrogate Nina Turner.

Like in the New York campaign pitting Engel against Rep. Jamaal Bowman (D-NY), Democratic Majority for Israel’s ads in Ohio had little or nothing to do with Israel. The ads pulled messaging directly from an unmistakable banner on Brown’s campaign website, focusing on Turner’s divisiveness and some choice negative comments she made about Joe Biden during the 2020 campaign. DMFI spent around $2 million on TV and other advertisements in the race, and that was enough to help Brown secure a comeback victory. The PAC almost single-handedly took over the reins of a lifeless campaign and turned it into a winner.

Turner is facing Brown again this year, in a primary race being held today. And DMFI is back again spending money on Brown’s behalf. But the legacy of last year’s race goes well beyond Cleveland. Brown’s victory over Turner cemented a model that is being used all across the country: found a nominally issues-based super PAC, and pour in millions of dollars to take down the most progressive candidate in a congressional race, with ads that have nothing to do with that particular issue.

Like a scout team checking for favorable battlefield terrain, DMFI’s success gave way to much bigger and deeper-pocketed groups flooding House primaries, overwhelming the progressive small-donor strategy. If Turner had held off Brown, maybe the corporate money train would have been seen as a losing proposition. But Brown’s victory gave the establishment proof of concept and major momentum, and as the primary season heats up in the next few months, outside money is likely to be the defining feature of Democratic politics in this cycle.

As the primary season heats up in the next few months, outside money is likely to be the defining feature of Democratic politics in this cycle.

For example, buoyed by DMFI’s win, longtime pro-Israel lobbying group AIPAC formed two campaign PACs for the first time to play in primary races. The first, AIPAC PAC, has endorsed 109 of the 147 Republicans who voted against certifying the presidential election on January 6, 2021. Yet its super PAC sister, the United Democracy Project, claims to support candidates who “come together in support of our democracy and other democracies around the world.” UDP has run ads for Shontel Brown in Ohio’s 11th (using the same messaging as in 2021), as well as key races in blue districts in North Carolina and Pennsylvania where progressives have an opportunity to win.

In Pennsylvania, UDP is attacking Summer Lee, a progressive state House member, with about $350,000 in ads that do not mention Israel. Asked by the local NPR station about the lack of Israel messaging from the pro-Israel group, UDP said, “It is important for voters to know that Summer Lee is out of the mainstream Democratic Party,” which gives the game away that this is an attempt at an ideological purge, irrespective of any single issue.

In North Carolina, UDP has put another $326,000 in ads favoring conservative state Sen. Don Davis, who has cast anti-abortion votes, against former state Sen. Erica Smith. And UDP’s $720,000 in support for state Assemblymember Valerie Foushee in the open-seat Fourth District race ended up costing her the endorsement of the state Democratic Party’s Progressive Caucus. Nida Allam, a progressive Pakistani American, has raised the most direct funding in that race. But Foushee’s super PAC success brought EMILY’s List into a race that has two pro-abortion Democrats, even as it stayed out of the neighboring race where Smith, a Democratic woman with Planned Parenthood’s support, is facing a man who has voted to limit abortions.

Even DFMI itself has stepped up its operation, with the establishment of a sister PAC called Mainstream Democrats PAC, and a billionaire mega-donor in billionaire investor and LinkedIn co-founder Reid Hoffman. As Teddy Schleifer of Puck News reported, Hoffman dropped $500,000 into the operation, which has been chartered to beat back progressives and left-wing populists, and is being operated as an extension of DFMI PAC, sharing staff, offices, and resources with DFMI and even paying the group for web hosting, despite itself having no mention of Israel in its charter. Mainstream Democrats PAC’s first spot is against … Nina Turner.

This has gone beyond the fraught issue of Israel politics. A super PAC called Protect Our Future, mostly funded by Bahamas-based crypto billionaire Sam Bankman-Fried, has dumped cash into multiple races, ostensibly to support candidates who favor “pandemic preparedness,” but suspiciously lining up with the establishment-progressive divide. Protect Our Future has given almost $1 million to support Shontel Brown, and in Oregon, the super PAC has thrown $7 million toward Carrick Flynn, a virtually unknown candidate in an open-seat race.

Crypto regulation is at the precipice of being debated in Congress. While Bankman-Fried insists that support of Flynn is grounded in the effective altruism cause of pandemic fighting, the ads have nothing to do with that, and are blandly positive spots that mention Flynn’s commitment to the economy and Social Security.

Incredibly, House Majority PAC, the campaign arm of House Democrats, intervened in Flynn’s primary with a $1 million buy, a nearly unheard-of bigfooting of an open primary in a seat that Democrats will likely win in November regardless of the candidate. Several progressive opponents penned a joint open letter condemning the action.

The House Majority PAC decision is indicative of how big money attracts the Democratic establishment. In a separate Oregon race, incumbent centrist Kurt Schrader is getting help from a pharma industry–funded PAC (with ads that, yes, have nothing to do with pharmaceutical prices), and he recently snagged the endorsement of President Biden. It’s been alleged that the DCCC is playing in that race as well. These two examples align with EMILY’s List’s endorsement of Valerie Foushee. And Biden’s only other endorsement this cycle has been of Shontel Brown in Ohio.

The alliance of crypto groups and Israel groups, two indescribably deep-pocketed interests that have nevertheless seen a slight uptick in scrutiny from progressives in Congress in the past year-plus, has drawn the battle lines for the progressive-vs.-moderate showdown that is certain to remake the party in 2022. With a wave of retirements taking place amongst elderly House reps all over the country, these newly vacant seats will decide the makeup of the party going forward, and whether or not the progressive or moderate caucus prevails whenever Democrats return to majority status (assuming they lose it in November).

Given that dire November forecast, and the reality that nearly every Democratic candidate desperately needs money for their Republican showdown, the appearance of nearly limitless spending to annihilate progressives even in safe Democratic seats shows just how important the ideological purge is to business interests. Even under the paper-thin guise of supporting Israel and deregulating digital tokens, they’ve taken Shontel Brown’s proof of concept and deployed it nationwide, before grassroots organizations and small-donor groups have even gotten up to speed.