Pennsylvania and Oregon election results from last night offer cause for hope for progressives: voters rejected the demands of oligarchs and Democratic elites. 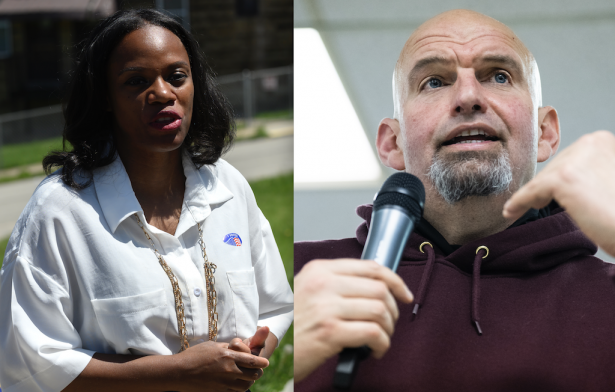 If politics lately has seemed a bit like The Empire Strikes Back, then Tuesday night’s stunning elections have offered an unexpected jolt of that Return of the Jedi feeling — at exactly the moment when progressives most needed a boost.

Heading into pivotal congressional primaries in Pennsylvania and Oregon, Democratic elites and their corporate donors were likely feeling confident that their huge super PAC spending would successfully buy yet more primary victories for corporate-aligned candidates. Indeed, House Democratic leaders planned to spend Wednesday honoring the anniversary of the New Democrat Coalition, which is the official arm of the party’s corporate faction.

If projected election results hold, underdog progressive candidates will end up winning most of the big primary contests of the night, despite being vilified by oligarch-bankrolled super PACs linked to the Democratic Party machine.

Notably, in at least two of the races, the progressive candidates framed their primary contest as a referendum on the politics of Senator Joe Manchin (D-WV).

In Pennsylvania, Lieutenant Governor John Fetterman’s antiestablishment campaign easily withstood attacks from a health insurance–aligned super PAC, as he won every county in the state to secure its Democratic US Senate nomination. Fetterman explicitly slammed Manchin, who represents neighboring West Virginia. It is not yet clear which Republican candidate will win the GOP senate nomination.

The spirited campaigns by Fetterman and Lee follow a series of progressive wins in the Keystone State, which is seen as a national bellwether. There, progressive candidates have recently defeated Democratic machine-backed candidates to win major city council, judicial, district attorney, mayoral, and state legislative races.

Tuesday’s results are the culmination of more than five years of deep electoral organizing in the state. The elections could bode well for progressives in Philadelphia’s upcoming mayoral race, where city councilwoman Helen Gym (D) is expected to run.

Pennsylvania’s 2022 Democratic ticket will be topped by gubernatorial nominee Josh Shapiro, who as attorney general prosecuted a major pipeline conglomerate, a student debt giant, and the Catholic Church — and also defended the state’s voting system from Donald Trump’s attempt to overturn the presidential election. Shapiro will face Republican state senator Doug Mastriano, an election denier who attended the January 6 insurrection.

Oregon Dems Confront “the Joe Manchin of the House”

Oregon saw millions of dollars of outside spending for corporate-aligned Democrats in two House primaries — and in both cases, the corporate candidates struggled.

In the state’s 5th district, Representative Kurt Schrader appears to be on the verge of losing his primary reelection bid against progressive Jamie McLeod-Skinner.

Schrader cast a key vote to block Democrats’ promised drug pricing legislation and worked to water the measure down, before playing a pivotal role helping Republicans kill President Joe Biden’s Build Back Better bill. He was nonetheless endorsed by Biden, who insisted “when it has mattered most, Kurt has been there for me.”

A super PAC bankrolled by a Big Pharma front group spent $1.1 million to boost Schrader, who also benefited from $800,000 in spending by one of a pro-Israel super PAC called Mainstream Democrats PAC.

While being outspent, McLeod-Skinner campaigned across the district calling Schrader “the Joe Manchin of the House.”

Meanwhile, in Oregon’s 6th district, State Representative Andrea Salinas appears to have won the Democratic House primary over Carrick Flynn despite a whopping $13 million of spending by super PACs.

One of those groups, Protect Our Future PAC, was bankrolled by cryptocurrency billionaire Sam Bankman-Fried. The other was House Majority PAC, a group closely aligned with the Democratic House leadership and run by Robby Mook, the campaign manager for Hillary Clinton’s 2016 presidential bid.

Polling Shows a Restive Democratic Base

Outside groups intervening in Democratic primaries did notch two victories in North Carolina’s 1st and 4th congressional districts — but overall, Tuesday’s outcomes were not the return on millions of dollars of investment for which they were hoping.

According to a new NBC News poll, nearly two-thirds of the party’s voters said they want to vote for a candidate “who proposes larger scale policies that cost more and might be harder to pass into law, but could bring major change” on the issues of health care, climate change, the cost of college, and economic opportunity.

Just 33 percent said they prefer candidates “who propose smaller scale policies that cost less and might be easier to pass into law, but will bring less change on these issues.”

In 2019, a Democratic operative mocked progressives, telling a reporter: “No one is afraid of those nerds. They don’t have the ability to primary anyone.”

Three years later, Democratic Party leaders and their big donors saw this week’s primaries as the chance to deliver a critical death blow to the weakened progressive movement.

Instead, the results signal that many rank-and-file Democrats may be disgusted with oligarchs’ attempts to buy candidates — and sick of their party’s Washington leaders trying to dictate the results of local elections.

Andrew Perez is senior editor and a reporter at the Lever covering money and influence.

The new issue of Jacobin will be out soon. Subscribe today and get a copy.