California Might Pass Its Own Personal Build Back Better

The Golden State is set to spend its capital gains haul on massive public investments in climate.

May 24, 2022 Lee Harris The American Prospect
Printer friendly
California Might Pass Its Own Personal Build Back Better Published May 24, 2022 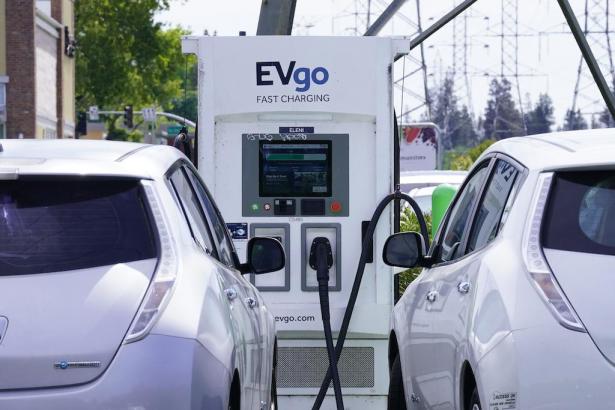 Electric cars are parked at a charging station in Sacramento, California, April 13, 2022. California wants electric-vehicle sales to triple in the next four years to 35 percent of all new-car purchases, Rich Pedroncelli/AP Photo

Around a tenth of that topline number is aimed directly at climate measures, with other social-spending programs also indirectly geared at helping residents of a state that has been pummeled by extreme weather.

“We’re never going to get a year like this again,” said David Weiskopf, a climate policy adviser at the progressive group NextGen Policy. The raft of investments is funded by an unprecedented tax haul from California’s richest residents, expected to swell the state surplus to $97.5 billion this summer. California expects residents to realize $291 billion on last year’s capital gains, which are at the highest level they have reached since 2000, the same year the dot-com tech bubble burst.

The governor’s “May revise” budget, which still must be negotiated with the legislature over the next month, would position California to capture gains from emerging energy sectors like lithium mining, even as it aims to improve safety for residents already hit by climate change. For example, Californians vulnerable to extreme heat and wildfires would see $220 million put toward turning schools into air-conditioned “resilience centers.”

California likes to hold itself out as pushing the vanguard on climate policy, and with this budget it could get its wish. Given the failure of Democrats’ signature federal spending plan, other states are now debating how to spend cash surpluses, and progressive groups are eager to pass federally stalled policy at the local level. That could make this budget a model for state-directed public investment—unless gains from the new spending are undercut by the state climate regulator.

NEWSOM’S LATEST BUDGET PROPOSAL, combined with last year’s $15 billion for climate measures, would bring California’s climate spending over the next five years to a hefty $47.1 billion. That almost rivals the first year of investment proposed for climate in Biden’s Build Back Better agenda.

The largest share of spending is aimed at transportation, California’s biggest source of pollution, with $6.1 billion for vehicle charging infrastructure and incentives to help poorer residents buy electric cars. Along with billions for transit, the budget also puts $150 million toward a “highways to boulevards” program that would turn aging urban highways into neighborhoods with housing and green space.

The governor announced a first draft budget in January. The latest revision, released last week, gave Newsom more than twice as much discretionary spending to play with. He chose to channel $8 billion of the newly available cash toward the state’s electrical grid, blaming recent supply chain disruptions and “tariff issues” for slowdowns in the state’s ability to deploy clean energy.

California likes to hold itself out as pushing the vanguard on climate policy, and with this budget it could get its wish.

To avoid possible shortfalls from an increasingly strained grid, like a repeat of August 2020’s outages as a 110-degree heat wave cooked the West Coast, the new spending centers on a $5.2 billion “strategic electric reliability reserve.” It looks to supply 5,000 megawatts of new capacity from a mix of new battery storage and delayed closure of existing plants. That would likely mean that in addition to postponing the closure of California’s last nuclear plant, Diablo Canyon, the state would also keep fossil fuel plants running longer, to be called on when the grid is overtaxed.

Weiskopf, of NextGen Policy, said there is not yet enough detail on the reliability reserve to weigh in. But he said extreme weather is harming the grid, making the reserves potentially necessary, and that the investments are also politically useful, preventing utility bill spikes that could come with grid upgrades.

Activists also disagreed over $100 million the budget puts toward carbon removal projects. Those are different from carbon capture and storage (CCS), which aims to capture emissions at fossil fuel plants, a technology that has been subsidized with little real benefit to date. Air capture technology is younger, expensive, and still unproven at scale, but some scientists say it could play a big role along with cutting emissions. RL Miller, chair of the California Democratic Party’s environmental caucus and founder of Climate Hawks Vote, said the $100 million would be better spent elsewhere.

ERECTING “LITHIUM VALLEY,” a hub for raw-material extraction, battery production, and energy research at California’s southern border, is also a top focus in the latest budget. The geothermal brine at wells in the Salton Sea is rich in lithium, a key component in batteries for electric cars. Startups are descending on Imperial County, which is one of the poorest counties in the state and heavily composed of Hispanic agricultural workers.

Amid the lithium frenzy, local groups have sought to capture more of the benefits than is typical in resource rushes. Newsom’s new budget earmarks $80 million for an expansion of San Diego State University’s Brawley campus in Imperial Valley, and proposes a permanent lithium production fee to capture benefits locally. It also provides tax credits for developers and would aim to streamline the permitting process for mining.

The multipronged approach shows another hard-won feature of Newsom’s budget: Climate spending is both more substantial and less of an afterthought. State agencies are spending directly on energy programs with the outlays coming through the state’s General Fund, making environmental issues less segregated and harder to cut. For instance, a $1.5 billion line item for electric school buses comes out of the education budget.

Integrating climate into existing budgets will matter, since virtually all of Newsom’s proposed funding is one-time. That’s in order to avoid recurring commitments that could get more costly as the economy cools. California’s capital gains taxation is volatile, since it is directly linked to a stock market that has already fallen precipitously this year.

CAPITAL INJECTIONS IN GREEN SECTORS are sorely needed, but there are limits to what they can achieve alone, especially as one-offs. Bringing down pollution requires not only carrots but sticks, and even as Newsom pushes historic spending on climate, the state climate regulator, the California Air Resources Board (CARB), says it is turning away from the policy that it has touted as its centerpiece mechanism for curbing emissions.

The main stick long meant to lower emissions is California’s cap-and-trade program, which sets a total limit on emissions and lets companies trade rights to pollute. California chose years ago to rely primarily on this market-driven approach to solving climate change, rather than regulation and industrial policy. Yet independent analysts say CARB, which auctions the allowances, has failed to price carbon at levels that actually drive down pollution.

Danny Cullenward, an energy economist and vice chair of the Independent Emissions Market Advisory Committee (IEMAC), which monitors the program, has documented a major source of the problem: Polluters have stockpiled allowances that let them avoid bringing down their emissions.

Earlier this month, CARB issued a draft scoping plan on the state’s climate policy. In the previous road map, published in 2017, cap-and-trade was the single biggest driver of the emissions reductions. This time around, the program is only briefly addressed in a section where it is deprioritized: CARB projects a 27 percent reduction in the role of cap-and-trade in reducing emissions by 2030, compared with the 2017 plan. That’s possible, board officials said in an interview with the Prospect, because other programs have outperformed.

“Other policies are working in conjunction to eat away at that bank of allowances that’s sitting there,” said Rajinder Sahota, deputy executive officer for climate change and research. She said that the pandemic brought down demand for credits, and the board is removing some allowances.

“That is incorrect—it’s actually backwards,” Cullenward said of Sahota’s claim that complementary policies “eat away” at the glut of allowances. While the state has many good policies that reduce emissions, he said, those policies reduce polluters’ demand for credits, making the market slacker. As of IEMAC’s 2021 report, the program still has some 320 million surplus polluting allowances banked in private accounts. That is more than the total cumulative emissions reductions CARB previously said are needed for this decade.

What’s more, the scoping plan says CARB will not even consider what reforms to cap-and-trade are needed to hit the 2030 goal until after it completes the plan. That itself could be a trying process since, beyond punting on cap-and-trade, the draft plan has basic gaps.

CARB’s scoping plan lays out four pathways to reach “carbon neutral” by 2045, but the modeling for those scenarios does not actually bring total emissions to zero. It would leave in place 15 million metric tons of greenhouse gases. Asked about this, CARB said that new modeling for the “natural working lands” sector lagged behind other modeling.

“We had to lock the assumptions down for the E3 modeling to get data to other contractors to do the economic and health analyses,” CARB said in a written statement shared with the Prospect. “It was too late to go back and redo the health and econ modeling with different numbers.”

The plan itself acknowledges discrepancies. One footnote reads, “For purposes of the Draft 2022 Scoping Plan, CARB assumed NWL could compensate for 15 CO2e of residual emissions. This assumption was made prior to completion of the NWL GHG analysis described in Chapter 2.”

Asked why CARB would release the proposal before reconciling all its assumptions, Sahota said that the draft is not final, and added, “We get to have a longer public process in the summer to work through those remaining issues.”

Among the most controversial questions in the review period will be carbon removal, which accounts for as much as 25 percent of reductions in the scoping plan. Even supporters of high-quality removal like Cullenward say that could amount to dangerous overreliance on the nascent technology.

All told, California’s ambitious climate budget and dawdling regulatory discipline recalls the watered-down version of Build Back Better that passed the House. That legislation was loaded with cash for green initiatives, but cut out the main policy that was supposed to limit climate emissions by penalizing utilities that kept burning fossil fuels.

To Cullenward, the situation encapsulates the contradiction at the heart of California’s climate policy, simultaneously cutting-edge and captured by industry. Bold short-term investments should signal to business that the state is getting serious about emissions, he said, but “the long-term planning signals and regulatory process are saying, ‘Don’t worry.’”