Chesa Boudin's fight has become a test case for criminal justice reformers — and their foes. 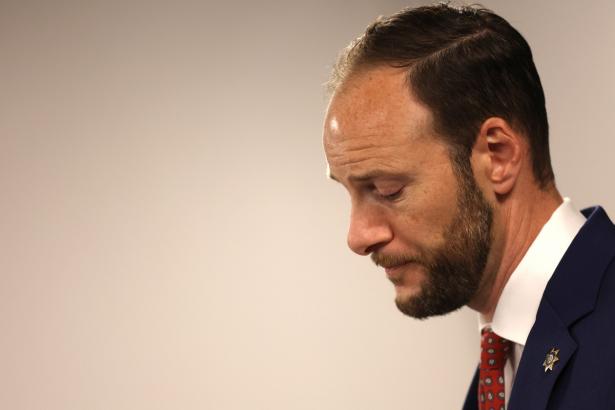 SAN FRANCISCO — District Attorney Chesa Boudin is a leader of the national movement for criminal justice reform. He could soon become a cautionary tale about its vulnerabilities.

A well-funded recall campaign looks poised to unseat Boudin next week. Its outcome will echo across midterm elections, shaping the elected officials who determine how alleged crimes should be prosecuted amid the nation’s oscillating debate over public safety.

“There’s no question that if the recall in San Francisco will be successful, it will be the playbook going forward nationally for those who want to roll back criminal justice reform,” said Anne Irwin, whose California-based organization Smart Justice has spent money to defend Boudin and elect other progressive prosecutors.

The campaign has become a sort of Rorschach test for how San Franciscans — and Americans — interpret rising anxiety about crime. The recall’s supporters see a reckless and incompetent prosecutor who has undermined public safety by prioritizing defendants, seeking lesser charges or avoiding jail time with pretrial diversion programs. Boudin and his backers warn that entrenched interests are exploiting fear and spreading misinformation to throttle a burgeoning national movement away from harsh sentences and over-incarceration.

Less than three years ago, San Francisco voters defied the city’s political establishment and channeled a growing criminal justice movement by making Boudin — a former deputy public defender and son of two Weather Underground members convicted of felony murder and robbery for assisting with the getaway-van in a botched armored truck robbery — the city’s top prosecutor. Now polls suggest he is likely to lose his job.

Boudin’s woes reflect genuine public anxiety about crime throughout California. Some types of crime, like larceny, decreased in San Francisco during the start of Boudin’s tenure, data shows, a period that overlapped with the Covid-19-spurred shutdown. But car thefts and burglaries spiked, as did homicides and shootings in parallel with a national surge in violent crime. Burglaries and homicide rates have since eased while larcenies have ticked back up.

San Francisco has long been a bogeyman for Republicans eager to portray a liberal dystopia. Conservative media outlets have amplified viral videos of shoplifting and organized smash-and-grabs in San Francisco and train robberies that left tracks littered with refuse in Los Angeles, where progressive District Attorney George Gascón has also faced recall efforts.

Law enforcement-reform advocates warn that a Boudin loss would ripple beyond San Francisco by emboldening foes of progressive prosecutors. They point to legislation in Pennsylvania to limit the Philadelphia district attorney’s tenure — widely seen to be aimed at reformist Philadelphia District Attorney Larry Krasner — and a bill in Illinois that would allow voters to recall the Cook County district attorney, a position currently held by progressive Kim Foxx.

Boudin cited those examples to underscore the stakes of his election in an interview this month. While he said Krasner’s recent primary victory, despite heavy law enforcement opposition, underscored the enduring appeal of progressive prosecutors, he warned that their antagonists would continue to try to block change.

“It’s not limited to San Francisco or L.A. We see it from coast to coast, and it involves attacking progressive, reform-minded DA’s,” Boudin said, arguing the recall “is designed to send a message not just to other district attorneys, but to other local officials here in San Francisco that if you take on the powers that be, if you try to effectuate system change, that they’re going to come for you, and they’re going to try to destroy your career.”

Republicans across the country are running on public safety, betting voters will punish Democrats for embracing a more lenient approach to sentencing and incarceration. That has put a spotlight on a recently elected wave of reform-minded prosecutors.

Conservatives running to unseat California Attorney General Rob Bonta have given Boudin a starring role in their campaigns, seeking to exploit crime concerns by linking Bonta to San Francisco.

The strategy is not unique to California. Virginia’s Republican Attorney General, Jason Miyares, recently advised the GOP to identify one of those progressive district attorneys and “make them famous.”

While attempts to recall Gascón have not yet qualified for the ballot, the Los Angeles district attorney has faced similar dynamics: Rank-and-file prosecutors have revolted, objecting in particular to Gascón’s directives easing sentencing. Gascón recently sent a fundraising plea for Boudin, framing the race as “a test for our national movement to end mass incarceration.”

“They are coming for Chesa Boudin. They won’t stop until we take the fight back,” Gascón wrote. “The GOP is hell-bent on subverting democracy and getting us out of office.”

The anti-Boudin campaign has been bolstered by millions of dollars from a coalition of real estate companies and executives — including a prominent Republican donor — and deep-pocketed tech industry executives. While Boudin has also drawn some tech support, influential Silicon Valley figures have portrayed the district attorney as emblematic of San Francisco’s struggles.

“Chesa Boudin’s failure as District Attorney has made San Francisco a more dangerous place to live and work,” venture capitalist and political kingmaker Ron Conway wrote in a December missive urging people to fund the recall.

The election also affords Mayor London Breed an opportunity to shape the city’s power dynamics by appointing Boudin’s successor if he loses. While Breed has not publicly taken a position on the recall, she has clashed with Boudin. And one of the mayor’s close allies on the Board of Supervisors has endorsed the recall, fueling speculation that that supervisor could be in position to replace Boudin.

Reform supporters like the American Civil Liberties Union and Irwin’s organization have poured money into Boudin’s defense, but they have been outspent by opponents. Boudin and his allies point to that money as evidence that the recall is a project of powerful interests seeking to exploit pandemic-spurred anxiety to accomplish a preconceived goal, not an expression of true voter concern. Qualifying the recall required about 51,000 signatures, and supporters submitted about 83,000, which amounts to less than a fifth of San Francisco’s registered electorate.

But the recall has also drawn credibility from a group of former prosecutors in Boudin’s office who argue the district attorney and his deputies have mismanaged and politicized prosecution. Former San Francisco prosecutor Brooke Jenkins said in an interview that Boudin and members of his leadership team — many of them fellow alumni of the public defender’s office — had pushed for lesser plea deals and more pretrial diversion.

“Chesa has a belief that your approach should be defendant-centered. Everything should revolve around what’s best for the defendants. He’s never let go of his role as the public defender,” Jenkins said. But, Jenkins argued, a prosecutor’s “primary function is public safety. You have to serve as an advocate of the victim.”

Boudin has said the higher rate of pretrial diversions is partially due to changes in state law compelling judges to consider those alternatives. But he said he agrees with the larger principle of resolving lower-level crimes through diversion programs and focusing more resources on serious offenses like homicides and rapes. Data shows Boudin has secured more homicide convictions and has charged rapes at a higher rate than his predecessors. He has also pointed to successes like a recent operation dismantling an alleged front for reselling stolen car parts.

“I think diversion programs have been shown by massive amounts of data to reduce recidivism. And if we’re not committed to reducing future crime, then we’re in the wrong line of work,” Boudin said. He added that he is guided by the need to “focus our limited courtroom resources, especially during the pandemic, on serious and violent crimes, which is exactly what we’ve done.”

Repudiating the recall, Boudin and his allies say, would vindicate that approach and prevent a reversion to the tough-on-crime policies that drove an era of excessive incarceration. But Jenkins made the opposite argument — that Boudin is undermining the larger movement.

“if Chesa Boudin remains in office and San Francisco continues to decline and he touts this nationally as reform, I think then everywhere else pushes back,” Jenkins said. “Everywhere else that’s less liberal, less diverse, that’s entrenched in doing it the old way, is going to say, ‘Hell no, we don’t want to hear about reform. Look at San Francisco.’”

Jeremy B. White co-writes the California Playbook and covers politics in the Golden State. He previously covered the California Legislature for the Sacramento Bee, where he reported on campaigns, myriad nationally significant policy clashes and multiple FBI investigations of sitting lawmakers.