tv The Circus Was Televised

Johnny Depp’s legal team bet that a combination of subliminal shots of nostalgia, meme- and sound bite-friendly details, and Depp being Depp on the witness stand could sway public opinion. They were right. 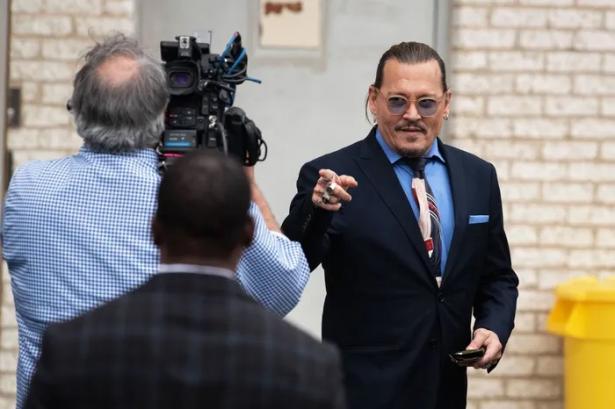 Johnny Depp’s legal team bet that a combination of subliminal shots of nostalgia, meme- and sound bite-friendly details, and Depp being Depp on the witness stand could sway public opinion. They were right.,Photo: Consolidated News Pictures/Getty Images

In the op-ed that Amber Heard wrote for the Washington Post in 2018, she stated that, “Two years ago, I became a public figure representing domestic abuse, and I felt the full force of our culture’s wrath for women who speak out.”

That op-ed, which never once mentions Johnny Depp by name, was deemed defamatory by a jury because it implied that Depp had abused Heard during their one-year marriage. Meanwhile a 2018 article published in British tabloid the Sun that outright referred to Depp as a “wife beater” was deemed not libelous in 2020 by a U.K. judge who presided over a separate defamation suit filed by Depp, who declared 12 out of 14 incidents of assault documented by Heard and the Sun to be credible. Depp has never been criminally charged in any of the incidents, but the U.K. trial got as close as a civil case can to finding him guilty.

The disparity between the two outcomes is jarring, but makes sense when considering how each case was decided and covered. While the British verdict was determined by a judge, the more recent trial in Virginia, where the Post’s printing presses and servers are located, was decided by a jury. More importantly, the British trial was not televised; U.K. law only recently enabled sentencing remarks from High Court and Senior Circuit judges to be televised, but trials are never broadcast or streamed in their entirety. In case this has not become abundantly clear during the past six weeks, the American version of Depp v. Heard did air live, both on Court TV and via a livestream on the Law & Crime YouTube channel, both of which reported substantial bumps in viewership during this messy, often absurd legal battle. And that’s how a trial prompted, in part, by Heard’s declaration that she had “felt the full force of our culture’s wrath for women who speak out” ended up unleashing the full force of that culture’s wrath again, at an even higher volume.

Certainly the 2020 trial in England received substantial media coverage. But if that proceeding was a three-ring circus, the one that just unfolded here in the States was a double bill brought to you by Barnum & Bailey and Jim Rose. Memes as well as mainstream media splashed pictures of Heard on the stand all over digital media, freeze-framing her expressions to make her look as grossly distraught as possible. Video of her touching her nose with a tissue was characterized by Depp supporters as evidence she was sniffing cocaine while being questioned by attorneys. All of this is exactly what Heard’s lawyer, Elaine Bredehoft, predicted would happen during a pre-trial hearing: “What they’ll do is take anything that’s unfavorable — a look,” Bredehoft argued at the time, as noted by Variety. “They’ll take out of context a statement, and play it over and over and over and over again.”

Depp’s attorneys, on the other hand, encouraged the presence of cameras, and used them to their advantage. No doubt aware that Depp has a substantial fan base ready to amplify select moments from the trial, his team played to that audience, guessing, correctly, that statements would be taken out of context and played out over and over again online. They focused time and again on largely irrelevant issues, like how Depp severed a finger and his assertion that Heard once revenge-pooped in their bed, that would surely spark discussion online and distract from more crucial evidence. If there’s one thing that people will remember from this trial, it may be all the shit about shit (Heard testified it was actually excrement from one of their dogs), which sparked its own subcategory of attempts at comedy — suddenly she was being referred to widely as “Amber Turd” — and provided the centerpiece of a Saturday Night Live sketch that bolstered the notion that this trial was frivolous but also kind of entertaining.

After the strides made during the Me Too movement, the tenor of public conversation around the case once again reduced a woman’s accusations of abuse to fodder for a laugh, and worse, something she was probably making up. The memeification of Heard during the trial heightened the sense that what we were watching was performative and therefore not credible, even though the U.K. judge had already said, “the great majority of alleged assaults of Ms. Heard by Mr. Depp have been proved to the civil standard.” The impact of that ruling got lost in the chaotic, pro-Depp jumble of words spit out on various platforms as the trial progressed. It also quite possibly was lost on the jury, who, as Bredehoff noted in an interview on the Today show, was not permitted to be informed of the outcome in the U.K. case.

For his part, Depp spent the trial leaning into his image as a non-mainstream non-conformist, the same image that established him as an actor blazing an unconventional path through Hollywood and that made his turns in Disney’s Pirates of the Caribbean movies seem like subversive acts. He often seemed bemused, as if he found the whole trial ludicrous, even though he was the one who instigated it. On the stand, he cracked jokes about his friend Marilyn Manson (also accused publicly of abusing women) and made light of texts he exchanged with actor Paul Bettany in 2013 in which he said of his then-future wife: “Let’s drown her before we burn her!!! I will fuck her burnt corpse afterward to make sure she is dead.” He explained the comments, apparently a joke about how to determine whether Heard was a witch, as a darkly comic riff on a scene from Monty Python and the Holy Grail. Ironically, the scene in question is actually about a bunch of primitive men who are so eager to burn a real witch that they dress up a woman to look like one. Context is important, and often during this trial, it was overshadowed if not completely absent.

It also worked to Depp’s advantage when his exes, who have never accused him publicly of abuse, entered the narrative. Ex-girlfriend Kate Moss testified in his defense, and even discussion about whether he struck Heard after she made fun of his famous “Wino Forever” tattoo — ink that originally said “Winona Forever,” in honor of former fiancée Winona Ryder — sparked memories of the Depp we first grew to know and like back in the 1990s. That’s what this trial was really about: Johnny Depp making everyone like him again so he can get hired instead of fired from movie projects. His legal team bet that a combination of subliminal shots of nostalgia, meme- and sound bite-friendly details, and Depp being Depp on the witness stand could sway public opinion. They were right.

Even those who say they stand with victims will sometimes look for the most tenuous excuse to let abusers off the hook when those abusers are famous people they admire. It’s why there are still staunch Woody Allen fans who claim he was framed by Mia Farrow, and why it took 30-plus women to accuse Bill Cosby of rape and assault before those accusations were taken seriously. Even people who aren’t hardcore enough to show up at a Virginia courthouse dressed as Jack Sparrow still may have hoped that Depp, whose work they love, whose posters once adorned the walls of their adolescent bedrooms, did not do the things Heard said he did. Any hints on social media that he was not an abuser were embraced and amplified, which made them seem socially acceptable. Once those pro-Depp sentiments were deemed acceptable, they became the norm, and it’s really easy to mistake the norm for the truth.

In an essay for Embedded, the Substack by Kate Lindsay and Nick Catucci, an anonymous former Depp supporter says she changed her mind about the case after noticing how far some Team Johnny folks were willing to go to maintain their stance. “I even saw one Reddit commenter confidently assert that he could tell Amber is a narcissist, because — I kid you not — her handwriting is too nice,” she wrote. “This is QAnon 2022, with the Q drops being daily TikToks analyzing the secrets hidden in Amber’s body language.”

But most supporters did not take the time to dig deeper or question the story that Depp’s team proposed as fact, and in doing so played into a legal strategy known as DARVO — deny, attack, and reverse victim and offender — that can be incredibly effective in a TL;DR, scroll-and-seek online world. Republicans have built a playbook around DARVO, which is perhaps why some of them were so celebratory over Depp’s victory. It also may explain why the American case bent in Depp’s favor and the U.K. one didn’t. As an international media lawyer told the Washington Post, “We find that DARVO works very well with juries but almost never works with judges, who are trained to look at evidence.”

The jury in the Depp/Heard case was never sequestered. They were told not to absorb media coverage about the proceedings, but if you’re living in this world, how could you not? It was impossible over the last month-plus to log on to Facebook, Twitter, TikTok or any news website without being smacked in the face with a headline or an image related to the very public feud. Even a casual glimpse at a GIF or YouTube video could have provided a sense of public sentiment and consciously or subconsciously swayed a juror’s perspective.

Much has been said already about the effect the rulings in Depp’s favor could have on other survivors of abuse, who may feel even more reticent to say something, especially when powerful men are involved. But it’s just as chilling to think that this case may be precedent-setting proof that as long as one person in a contentious lawsuit can win the fight for public sympathy, whether it’s based on facts or not, a jury very well may follow. At the end of this six-week ordeal in Virginia, what’s indelible in the hippocampus is the idea that, thanks to the way we absorb information in 2022 — either dismissing details because anything involving celebrities is deemed trivial, or assessing them based on the skewed assessments that enter our carefully curated information bubble —  we’ve only begun to feel the full force of our culture’s wrath for women who speak out.