Medicare for All Could Have Prevented More Than 338,000 Us COVID Deaths: Study

"Healthcare reform is long overdue in the U.S.," said the lead author of a new study. "Americans are needlessly losing lives and money." 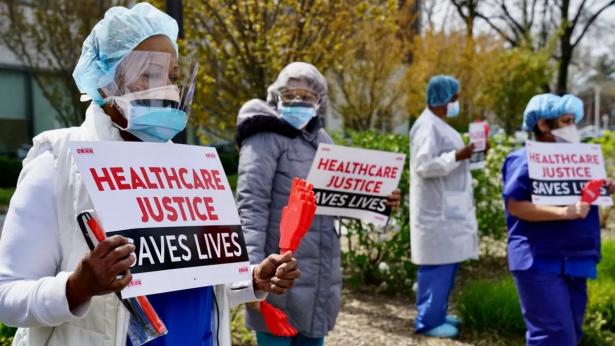 Public health workers, doctors, and nurses protest outside a hospital in the Bronx on April 17, 2020 in New York.,Giles Clarke/Getty Images

Covid-19 has killed more than one million people in the United States over the past two years, but more than 338,000 of those lives could have been saved if the country had a universal single-payer healthcare system such as Medicare for All.

That's according to new peer-reviewed research published Monday in Proceedings of the National Academy of Sciences.

Although U.S. residents pay more for healthcare than their peers around the world, the nation's fragmented for-profit model leaves tens of millions of people uninsured and delivers worse outcomes.

Unnecessary costs and preventable deaths were already rampant in the U.S. before the coronavirus took hold, but the ongoing pandemic has further exposed and exacerbated the many preexisting inequalities that have contributed to exceptionally high mortality compared with other high-income countries.

Universal single-payer healthcare, which the study calls "fundamental to pandemic preparedness," could have prevented 338,594 Covid-19 deaths in the U.S. from the beginning of the public health emergency to mid-March 2022. Researchers estimate that if everyone in the country was provided with comprehensive care for free at the point of service, 131,438 people who died from Covid-19 could have been spared in 2020 alone, and roughly 80,000 people with other diseases could have been saved that year. More than 207,000 additional Covid-19 deaths could have been averted in 2021 and the first three months of this year.

With Medicare for All, the U.S. also could have avoided $105.6 billion in healthcare expenses associated with Covid-19 hospitalizations over the course of the pandemic, the study says.

"Healthcare reform is long overdue in the U.S.," the study's lead author Alison Galvani, director of the Center for Infectious Disease Modeling and Analysis at the Yale School of Public Health, told Scientific American. "Americans are needlessly losing lives and money."

To arrive at their figures, Galvani's team compared the mortality risks of Covid-19 and all other causes of death among people with and without health insurance. The researchers amassed population characteristics of all uninsured Americans during the pandemic, considering variables such as age-specific life expectancy and the heightened mortality that accompanies uninsurance.

Because people without health insurance typically do not have a primary care physician, "they are more likely to suffer from preventable diseases such as Type 2 diabetes [and] they also tend to wait longer to see a doctor when they fall ill," Scientific American explained. "These two factors already contribute to higher mortality rates in nonpandemic years, and they compounded the impacts of Covid-19. Comorbidities exacerbate the risk of the disease, and waiting to seek care increases the likelihood of transmission to other people."

More than 28 million U.S. adults already lacked health insurance and tens of millions more were underinsured prior to the start of the pandemic. Millions of additional workers were kicked off of their employer-based plans when the coronavirus crisis resulted in widespread unemployment.

"Many Americans feel secure in having good health insurance from their employer," said Galvani, "but employer-based insurance can be cut off when it is needed most."

In their new study, the researchers also predict how much insuring the entire U.S. population would cost—and save. They estimate that a single-payer healthcare system would have generated a net savings of $459 billion in 2020 and would yield $438 billion in a nonpandemic year thanks to more efficient investment in preventative care, reduced administrative costs, and increased negotiating power for pharmaceuticals and technology.

"Medicare for All would be both an economic stimulus and lifesaving transformation of our healthcare system," said Galvani. "It will cost people far less than the status quo."

Ann Keller, an associate professor of health policy and management at the University of California, Berkeley who was not involved with the research, told Scientific American that she thinks the new study may underestimate the number of Covid-19 deaths that could have been prevented with universal healthcare because it doesn't sufficiently address the relationship between single-payer systems and lower rates of chronic disease.

"Having consistent access to care can prevent chronic disease from occurring and can ensure that patients who develop chronic disease have it better managed," said Keller. "I would think that, if one took that into account, the estimates of avoided deaths would be greater than the numbers reported here."

The authors do acknowledge that their "estimates are conservative with regard to the lifesaving benefits of comprehensive universal healthcare that eliminates all costs to the patient" because underinsured people often forgo needed care just like their uninsured counterparts, but the paper focuses only on the latter.

An estimated 44% of U.S. adults—roughly 112 million people—continue to struggle to pay for healthcare. To eliminate the high premiums, deductibles, and copays that currently enrich the insurance industry—making healthcare unaffordable for tens of millions, including many who are nominally insured—Sen. Bernie Sanders (I-Vt.) last month introduced the Medicare for All Act of 2022 alongside 14 Senate co-sponsors.

"We can either continue down the path of corporate greed and human suffering, or we can do what every other rich nation has done and guarantee universal coverage," Public Citizen president Robert Weissman said at the time. "Medicare for All is the realistic, humane, and just choice."