Time for a new movement to stop the nuclear arms race. 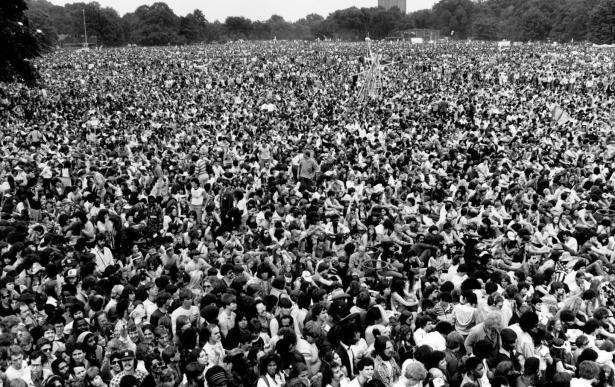 Forty years, and the memory is as vivid as ever. It was a beautiful spring day. The United Nations Second Special Session on Disarmament was about to get underway, and we were determined to be heard. The arms race had to stop, we said; nuclear weapons had to be abolished—and instead of endlessly pouring extravagant amounts of money into military budgets, it was time to put our national treasury to use meeting the needs of our communities.

Ronald Reagan was president. His administration was planning to place new short-range nuclear missiles in Europe, just minutes from the Soviet Union. Massive marches opposing these plans had already been held in capital cities throughout the continent. It was time for the US peace movement to step up.

For 18 months, the June 12 Rally Committee (the national coalition leading this effort) worked to put together the strongest possible demonstration of opposition to nuclear weapons. There were serious struggles within the coalition: Should we address militarism—including US intervention—more directly? How do we include more people of color in the leadership of the coalition? Could we build a structure that was not top-down but instead encouraged and nourished new initiatives? These represented real differences within the coalition, and in my opinion, the best decisions were not always made.

The work kept expanding. Throughout the country, local groups—some long-standing and others created for this demonstration—took up the call and became the backbone of the mobilization. Some 600 groups spread the word and organized bus, train, and car caravans to get people to the march. Some 5,000 people donated their energies to help ensure that the experience of the 1 million people who marched—and those who barely moved, because every inch of midtown Manhattan was packed with people—was powerful, and that our message would be heard.

Over the years, I have organized and been at more demonstrations than I can count. Many of these played important roles in the social movements of their time. And yet June 12, 1982, stands out not only for its size but also for the collective energy and strength of the message, for the power we exerted that day—and the impetus it gave to the work for years to come.

To be clear: We did not abolish nuclear weapons, and we did not move the money out of militarism and into our communities. But we helped move the needle on nuclear disarmament by nurturing this movement.
It would be three more years before Reagan and Mikhail Gorbachev met and laid the groundwork for what would become the Intermediate-Range Nuclear Forces Treaty. This was the first time the United States and the Soviet Union agreed to reduce their nuclear stockpiles, abolish a whole category of nuclear weapons, and allow on-site inspections. Many factors led to that agreement, but without a doubt the June 12 mobilization was one of them.

The longer-lasting value came from the organizing over the months leading up to June 12. Not just selling bus tickets: Educational work, local media work, helping people understand the threat and the urgent need for action—all were central to the organizing. People need to believe that what they do makes a difference, that their participation is central to securing change.

Today, there are some 13,000 nuclear weapons in the arsenals of the United States, Russia, China, France, India, Pakistan, the United Kingdom, North Korea, and Israel. The US and Russia have about 90 percent of them. These more modern weapons are exponentially deadlier than the bombs dropped on Hiroshima and Nagasaki 77 years ago.

The dangers of nuclear war remain all too real. Russia’s war against Ukraine has reawakened public awareness of how close we are to a nuclear catastrophe. Just one bomb dropped—whether deliberately or by accident—could lead to indescribable horror.

No one demonstration or series of actions can make the needed changes, but when our communities are in motion together, we can alter the public discourse and change policy. Equally important, we are stronger, more effective, and more anchored in the realities of people’s lives when we articulate and act on the connections between struggles.

Abolishing nuclear weapons will require ending militarism in its many forms: from global wars to militarized policing here at home; from bloated military budgets to a culture of militarism to the easy access to the guns that are killing people every day. All of this must be anchored in the struggles for racial and economic justice and in urgent action to stop the devastation of climate change. The good news is that so many younger organizers are grounded in that comprehensive perspective.

It is a big agenda, but abandoning any of it will weaken our work. Let us use the memory of June 12, 1982, to strengthen the ongoing movement for nuclear disarmament and to bring more energy to the other movements of today. As we honor what we’ve achieved, let us look back for insights into how we can more powerfully create the change so desperately needed.

[Leslie Cagan is an American activist, writer, and socialist organizer involved with the peace and social justice movements. Leslie Cagan served as the coordinator of the June 12, 1982, mobilization. She is the former national coordinator of United for Peace and Justice, the former cochair of Committees of Correspondence for Democracy and Socialism, and the former chair of Pacifica Radio.]