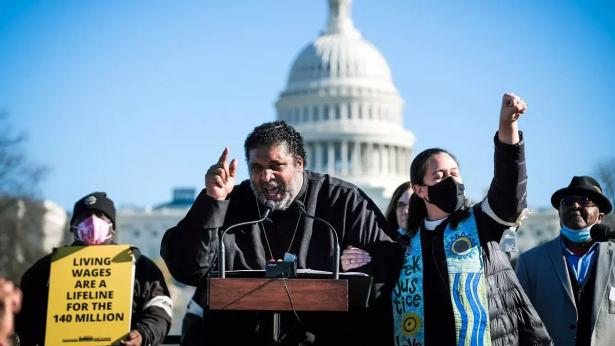 The Mass Poor People's and Low-Wage Workers' Assembly and Moral March on Washington is scheduled to begin at 9:30 am local time. The campaign has put together an online FAQ page for participants.

Contrasting the planned event with a right-wing mob's attack on the U.S. Capitol last year, Bishop William Barber, the campaign's co-chair, said on Democracy Now! Friday that poor people and allies from across the country "are coming nonviolently to Washington, D.C."

Their key messages for those in power, Barber said, include: "We won't be silent or unseen anymore."

"The time has come for us to have a Third Reconstruction," Barber continued. "We had one in the 1800s, one in the 1960s. We need one now, that's about policy, reconstructing a moral framework, political framework in this country, because to have this level of poverty, that's un-talked-about too often and unseen and unheard, is actually morally indefensible, constitutionally inconsistent, politically insensitive, and economically insane."

"So people are coming," he said, "but poor people are coming to say not only do we need a moral reset—and low-wage workers are saying it—we represent 32% of the electorate now, poor people do, and 45% of the electorate in battleground states. And it's time for that power to be organized, mobilized, and felt in every election throughout this country."

Discussing the June 18 gathering and related events preceding it, Barber emphasized earlier this year that the D.C. assembly "is not just a day of action," but a "declaration of an ongoing, committed, nonviolent, truth-telling, multiracial, interfaith moral movement."

"We are not in this for a moment, but for a movement," he said. "June 18, and everything that leads up to it and after it, will be for the fundamental shifting of the narrative and changing this sickness that we're seeing in our nation."

Poor People's Campaign co-chair Rev. Dr. Liz Theoharis, who also appeared on Democracy Now! Friday, highlighted how the fight "to implement a single-payer universal healthcare system" and the "demand for living-wage jobs, for adequate housing, for immigration reform, for protecting this democracy, they're all connected."

An organizing manual for Saturday's event also notes the connections and declares that "we must do more to make America live up to her possibilities." Specifically, the document calls for doing more:

Those were also the focal topics at a Wednesday briefing with members of Congress, which featured remarks from Barber and Theoharis as well as several low-income Americans who called on Congress to actually prioritize people like them in policy decisions.

"Every dollar that we spend destroying communities overseas is a dollar not spent on universal healthcare, affordable housing, or meaningful social services and public education," said Kyle Bibby, a military veteran from New Jersey. "Every youth sent overseas for war is a life at risk for a sacrifice that we cannot justify. Every veteran returning who is saddled with trauma is a high toll to pay for wars that never had a clear goal—and many are returning to underfunded and forgotten communities.”

Morgan Leavy, a barista at Texas' first unionized Starbucks, said that "if a bunch of mostly young adults with little-to-no organizing experience can put enough pressure on a multibillion-dollar company to raise the minimum wage in less than a year, we absolutely expect our government to be able to do so too."

As Common Dreams reported earlier this month, Leavy is the kind of person the campaign co-chairs urged President Joe Biden to meet with in D.C.

"It is time for the president to act on his pre-election promise to address poverty," he said, noting that "labor unions are joining our call to the president to use his power to lift the voices of impacted people and to act now."