books The Power Worshippers: Inside the Dangerous Rise of Religious Nationalism

This book, published two years ago (as was this review), remains timely, especially given decisions already handed down by the evangelical Christian U.S. Supreme Court majority, as well as those expected from the Court later this month. 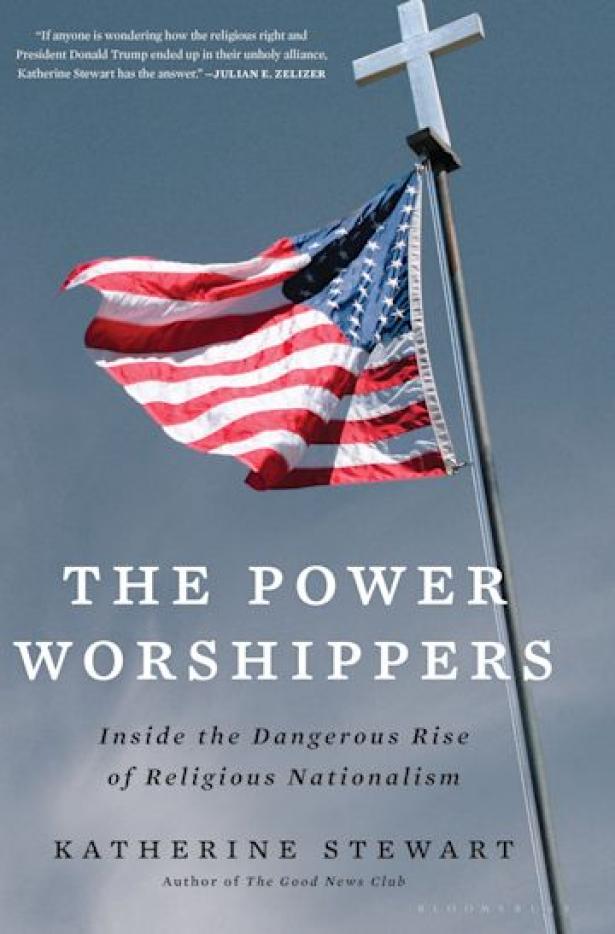 Is the nation’s true motto “E Pluribus Unum” (Latin for "Out of Many, One") or is it “In God We Trust”? This is the underlying question posed by Katherine Stewart’s essential study, The Power Worshippers.

“E Pluribus Unum” was originally proposed by a Congressional committee on July 4, 1776, as "a seal for the United States of America" and approved by an Act of Congress in 1782. “In God We Trust” was first deployed on U.S. coins during the Civil War and, in 1956 at the height of the Cold War, Congress mandated it to be the nation’s official motto. (In 1954, “under God” was inserted into the pledge of allegiance.) Stewart analyzes how radical, conservative Christians have made “In God We Trust” the motto guiding “the dangerous rise of religious nationalism.”

Over the last two and a half centuries, the nation witnessed four “culture wars”—in the 1840s, accompanying the Second Awakening; in the 1920, culminating in Prohibition; in the 1950s, reflecting Cold War McCarthyism; and in the 1970s, a rejection of 1960s counterculture.

Stewart’s invaluable book is a detailed investigation into how, over the last quarter century, the culture wars morphed into a political movement. The book documents how this movement, and its tireless leadership, has successfully moved to gain political power and increasingly impose its vision of Christian fundamentalism on American society. As the author warns, “The rise of the religious right should be cause for alarm among all who care about the future of democracy in America.”

Until Donald Trump’s election in 2016, the religious right appeared to be contained, its scope of struggle narrowed to two issues: abortion and gay rights; however, his election renewed the religious right’s moralist campaign, energizing conservatives of every stripe, including antiabortionists and white nationalists.

When Trump and other top administration officials took office, they pledged to fulfill the 2016 Republican Party’s platform that asserted:

“Traditional marriage and family, based on marriage between one man and one woman, is the foundation for a free society and has for millennia been entrusted with rearing children and instilling cultural values. We condemn the Supreme Court’s ruling in United States v. Windsor, which wrongly removed the ability of Congress to define marriage policy in federal law.”

Trump’s election occurred as Republicans controlled both Houses of Congress and, once in office, he appointed two conservatives to the Supreme Court—Neil Gorsuch and Brett Kavanaugh—consolidating the religious right’s control of the nation’s legal authority. Compounding this situation, numerous members of Trump cabinet are drawn from the religious right including Vice President Mike Pence and Education Secretary Betsy DeVos as well as Jay Sekulow, the president’s counsel.

Going further, she warns, “It seeks to control all aspects of government and society. Its successes have been stunning, and its influence now extends to every aspect of American life, from the White House to state capitols, from our schools to our hospitals.”

She details how the Christian right has effectively employed a network of think tanks, advocacy groups, pastoral organizations, and the fortunes of the very, very rich to achieve its power.

Steward is a journalist who anchors each chapter in a compelling story of a distinct facet of the Christian nationalist movement. In one chapter she visits Unionville, NC, to attend a seminar sponsored by Watchmen on the Wall considering how to end the Johnson Amendment restrictions on religious organizations endorsing political parties or candidates.

In other chapters she provides in-depth analyses of key leaders of the movement, including: Ralph Drollinger (who offers weekly Bible study groups in the White House of officials); Paul Weyrich (who led the antiabortion movement); Jim Domen (an ex-gay anti-gay activist who leads Church United, a voter-outreach group); David Barton (proponent of Project Blitz); and R. J. Rushdoony (who she calls “an unacknowledged leader of the movement”). She also explores the role of the religious right in the rise of the homeschooling movement and how calls for “free speech” led to the erosion of the traditional wall separating church and state.

This book suffers from two minor shortcomings. First, it offers no statistical overview as to the size of the movement’s hardcore believers. The author tracks the various—and sizable—fortunes that underwrite it. She argues that Christian nationalism “is a militant minority” and notes that “26 percent of the voting age population” supported movement candidates in 2016. That year, the voting age population (VAP) was 250 million people, so does this mean that 65 million Americans are part of the Christian nationalist movement? Second, the author presents Christian nationalism as a populist, nonviolent movement, but doesn’t speculate about its relation—if one exists—with other sectors of the radical rights like white nationalists, neo-Nazis, or skinheads.

The Power Worshippers should be read by all Americans who believe in democracy and the separation of church and state, especially as the 2020 elections nears. As Katherine Stewart warns, Christian nationalism is a movement that aims “to replace our foundational democratic principles and institutions with a state grounded on a particular version of Christianity . . . that also happens to serve the interests of its plutocratic funders and allied political leaders.”