The real object of the Jan. 6 Committee investigation is the “political coup” that Trump sought to orchestrate as he attempted to cling to power. The January 6th insurrection was simply the last desperate gasp. 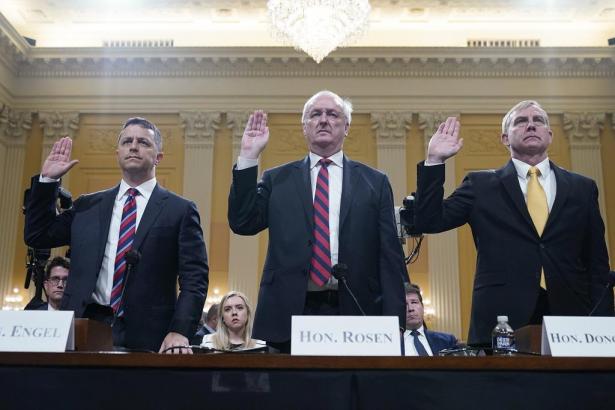 The Committee to Investigate the January 6th Attack on the U.S. Capitol made a very convincing case today that the real peril to the transfer of power following the 2020 election didn’t come on January 6th of last year; it came on January 3rd. That’s when Trump almost put his own stooge in control of the Department of Justice, only to be thwarted by every top official both there and in his own counsel’s office.

In so doing, the committee made clear what it’s been creeping up on all along. The real object of its investigation isn’t simply the violent attack on the Capitol. It’s the “political coup,” as one committee member termed it, that Trump sought to orchestrate as he attempted to cling to power, of which the January 6th insurrection was simply the last desperate gasp.

After an introductory hearing to showcase just how violent the January 6th insurrection was, each of the four subsequent hearings have focused on a different set of Trump’s machinations to overturn the election. First, the committee highlighted Trump’s aides telling him in detail that he lost; second, Trump’s pressure on Mike Pence to reject the certified electors from the swing states he’d lost; third, Trump’s pressure on Republican leaders from those states to overturn those certifications (based on what Rudy Giuliani termed “theories but no evidence”); and today, Trump’s determination to install a completely unqualified attorney who promised to put the Department of Justice imprimatur on bogus fraud claims and encourage swing-state Republicans to send their equally bogus slates of Trump electors to Congress’s January 6th vote tallying.

In the most riveting testimony the committee has yet taken, it heard today from the three top Trump appointees at the Department of Justice after Bill Barr departed just before Christmas 2020: acting Attorney General Jeffrey Rosen, acting Deputy Attorney General Richard Donoghue, and DOJ Legal Counsel Steven Engel. Rosen testified that beginning even before Barr left, he got repeated phone calls from Trump every day, urging him to investigate allegations, each more far-fetched than the next, that the department had already investigated and debunked. (One such claim that Trump returned to repeatedly was that the Dominion Voting tabulation was so skewed that in Michigan’s Antrim County it had a 68 percent error rate. A manual recount of 15,000 of the ballots that Dominion had tallied there, however, had turned up exactly one vote that Dominion had miscounted.)

Donoghue, who was also receiving such calls, noted that Trump’s tone grew more emphatic and desperate with each passing day. He relayed one Trump utterance that he wrote down at the time (he’d been taking notes) and quoted verbatim: “Just say it was corrupt,” Trump told him, “and leave the rest to me and Republicans in Congress.”

No top official in the Justice Department was willing to do that, but a middle-range official, Jeffrey Clark, an assistant attorney general for environmental issues who became acting head of the Civil Division in the administration’s waning days, clearly was. In late December, Clark came to Rosen and Donoghue and asked them to sign a letter he wanted the department to send to Republican state legislators in Georgia, stating that DOJ had concerns (none specified) about the state’s election results and encouraging them to send a rival slate of electors to Congress for its June 6th tabulations. We learned today that Clark hadn’t actually drafted the letter himself; that had been done by Ken Klukowski, an attorney working with John Eastman, whom Clark had brought into the department after the election as his aide. (Whether Klukowski was being paid by the Giuliani-Eastman operation while also a DOJ official, I gather, has yet to be determined.)

The real object of its investigation isn’t simply the violent attack on the Capitol. It’s the “political coup” that Trump sought to orchestrate.

Rosen and Donoghue replied that the DOJ had none of the concerns alluded to in the letter, having previously determined that it was the election claims, not the election, that were fraudulent. In the course of what Donoghue called “a very contentious meeting,” they also expressed anger and dismay that Clark had been meeting with Trump, despite his promise, once Rosen had found out about the first such meeting, that he would have no further meetings with the president unless Rosen OK’d them.

With Rosen and Donoghue refusing to sign, Trump’s next move was to can Rosen and replace him with Clark. The committee displayed some White House emails from the morning of January 3rd in which it was already referring to Clark as the new AG. When Rosen got wind of this, he requested a meeting with Trump, while Donoghue asked all the department’s assistant AGs in a conference call if they’d serve under Clark; all responded they’d immediately quit.

The dramatic climax of today’s testimony was the three witnesses’ recounting of that January 3rd evening meeting in the Oval Office, for which Trump flew in from Mar-a-Lago, and which included not only Clark and Rosen, but also Donoghue, Engel, White House Counsel Pat Cipollone, and his deputy Eric Herschmann. Trump began by accusing Rosen of not doing anything to support his claims. “What have I got to lose?” Trump asked, probably rhetorically, by replacing Rosen with Clark.

He got a loud, unrhetorical answer. Everyone in the room, from both the department and the White House counsel’s office, told Trump he would be remembered for damaging fundamental American institutions. Donoghue pointed out that Clark, who’d never actually tried a case, had no qualifications to head up DOJ. He told Trump that he and all the department’s assistant secretaries would resign. He predicted that within a day or two, there would be hundreds of resignations from U.S. attorneys across the country and department attorneys in D.C. He said he doubted that the FBI would even view Clark as legitimate. Cipollone added that Trump’s action amounted to a “murder-suicide pact”—killing the credibility of DOJ and just maybe Americans’ already dwindling faith in their governmental systems, as well as Trump’s capacity to do anything in his final two weeks in office.

Trump then asked Engel, whose job at the Office of Legal Counsel includes briefing presidents on the legalities of policy proposals, what he’d do upon Clark’s appointment. Engel replied not only that he’d resign immediately, but that the story the media would run with wasn’t that the department had “concerns” about the election, but rather that its leaders were leaving en masse. “Jeff Clark,” Engel concluded, “will be leading a graveyard.”

Engel’s response, Rosen testified, was “the turning point” in the meeting. Recognizing that Engel was probably right, Trump said he’d concluded he wouldn’t fire Rosen and install Clark after all.

That concluded the witnesses’ testimony, but the committee still had a coda to the day’s proceedings. Showing emails from members of Congress and playing the testimony of White House staffers, Reps. Kinzinger and Cheney—the committee’s two Republicans—revealed the names of their Republican colleagues who’d sought preemptive pardons from Trump in the days between the January 6th insurrection and the January 20th transfer of power. It included such Designated Trump Prevaricators as Matt Gaetz, Scott Perry, Mo Brooks, Louie Gohmert, Andy Biggs, and possibly Marjorie Taylor Greene and Jim Jordan, whom Kevin McCarthy had initially nominated to sit on the January 6th Committee before he decided that Republicans should simply refuse to take part in the proceedings altogether. As events would have it, of course, every witness who’s testified before the committee (except for cops, filmmakers, and precinct-level vote counters) has been a Republican.

Shortly after the hearing, Brooks texted a copy to the press of the email he sent to the White House asking for a blanket pardon for every Republican who objected to electors from Arizona and Pennsylvania, claiming that “Socialist Democrats” would “abuse America’s judicial system” by prosecuting them for attempting to subvert the election.

The committee is now suspending its sessions for the next two weeks, to allow time for new witnesses, prompted by the testimony thus far, to come forward, and for more evidence to be received and processed. That’s the mark of a successful set of hearings. In 1973, the Senate Watergate Hearings, led by foxy grandpa Sam Ervin, uncovered more and more evidence of the scandal as its investigations proceeded, stumbling onto the discovery months into the effort that Richard Nixon had recorded his every utterance, and every utterance from those in his presence, at the White House. The Watergate tapes sealed Nixon’s fate, and the January 6th Committee has produced the latter-day version of those tapes in the emails and documentary footage it has shown.

None of this has thus far produced quite the equivalent of the case-closed revelations in the Nixon tapes, where he is heard ordering the CIA to obstruct the FBI’s investigation of the Watergate break-in. But the recording of Trump’s request to Georgia Secretary of State Brad Raffensperger to find just enough votes to give the state to Trump—after three recounts had definitively shown that Biden carried the state—comes close enough for me.

As the committee takes the next fortnight to process new material, it’s clear where they’re headed. They get the big picture and are rolling it out to us with cumulative power. It’s not just a violent riot at the Capitol they’re investigating. It’s the first attempted coup (at least, the first attempted by a sitting president) in American history.

Compelled by the evidence they’ve thus far uncovered, they’re playing for much higher stakes than I initially thought they would. Good for them.

Read the original article at prospect.org. Used with the permission. © The American Prospect, Prospect.org, 2022. All rights reserved. Click here to support the Prospect's brand of independent impact journalism.