Speaking at the Global Media Forum in Bonn, Nobel laureate Maria Ressa noted that lies, laced with anger and hate, spread faster than facts. "Rebuilding trust with truth is vital to combat the rise of fascism," she said. 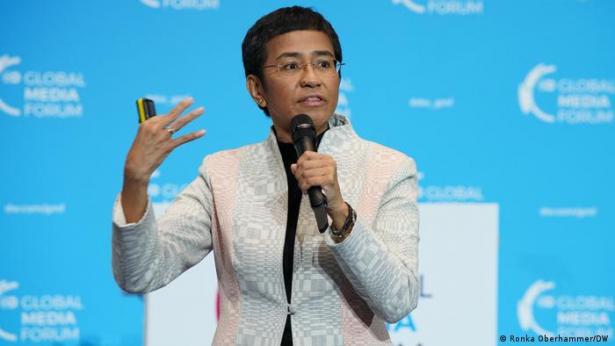 Media experts from around the world are taking part at the two-day event to discuss the future of journalism in a time of wars, crises and catastrophes.

During her speech, Ressa pointed out how big tech is contributing to the problem of fake news and disinformation, noting that lies — laced with anger and hate — travel faster than facts.

The spread of lies, as well as personalized mass persuasion, hyper-socialization and the tyranny of trends are eroding a sense of shared reality and promoting surveillance capitalism, she argued.

The renowned journalist called for legislation to regulate tech firms as well as increased financial support for media, urging democratic governments to allocate more than the 0.3% of their overseas development assistance they currently spend on promoting journalism.

THREATS TO FREE SPEECH AND MEDIA

Ressa's comments come at a time when journalists and human rights activists in the Philippines are increasingly concerned about developments in the country, where Ferdinand Marcos Jr., the son and namesake of the former Philippine dictator, will become president on June 30 after his recent electoral triumph.

Marcos Jr.'s running mate — Sara Duterte, the daughter of the outgoing President Rodrigo Duterte — was sworn in as vice president on Sunday.

Both of them have so far failed to acknowledge the human rights atrocities that took place under their fathers.

In line with the family's decades-long effort to repair its legacy, Marcos Jr. has in fact called for a revision of textbooks that cover his father's rule, saying they are teaching children lies.

Critics say both the Marcos and Duterte families have excelled at exploiting and manipulating social media to create an alternative information ecosystem with wide reach.

Rappler, the news organization founded by Ressa in 2012, has been at the forefront of the campaign against fake news and disinformation in the country, pooling together resources among a variety of actors — including reporters, lawyers and activists — to fact-check and expose disinformation.

The site, one of the most popular in the Southeast Asian country, has emerged as a key platform to combat misinformation and document human rights abuses, particularly over the past six years during the rule of outgoing President Rodrigo Duterte, including relating to his deadly war on drugs.

Rappler's journalists reported on the excesses of the anti-drug campaign, which left thousands of mostly minor suspects shot dead by police or vigilantes.

The drug killings are currently being investigated by the International Criminal Court as a possible crime against humanity.

In addition to Rappler, Ressa also co-founded the Real Facebook Oversight Board, a group of global experts aimed at holding Facebook accountable. It's not linked to the social media giant's own oversight board.

At the GMF, Ressa said Facebook "replaced journalists with influencers" and that social media rolled back democracy in a number of countries, also calling for tougher government regulation.

Speaking to DW later in the day, Ressa said: "The algorithms of social media, which by now is the largest distribution platform for news globally, literally pulled us apart, polarized us and radicalized us."

"The consequences are that you have news being distributed that is emotionally manipulative, and the thinking slow part — which is journalism, fact-based, evidence-based reasoning — that's not only gotten weaker, it's allowed the rise of illiberal democracies around the world."

She also stressed that "we're losing the war globally" when it comes to the fight for fact-based journalism.

By relying on social media for content distribution, Ressa said, news organizations "walked into a surveillance capitalism model that is essentially manipulating people online for profit."

That's why, "I think they must separate," she said.

"Our biggest problem right now is how do we reclaim our communities. How do we build better tech so that distribution somehow comes back to us and all of that begins with holding technology accountable for the harms it has caused."

ATTEMPTS TO SHUT DOWN RAPPLER

In October 2021, Ressa — along with the Russian journalist Dmitry Muratov — received the Nobel Peace Prize for their efforts to protect freedom of expression.

In response to Rappler's critical reporting, however, the Philippine government has taken several steps to shut down the site by charging Ressa and the publication with multiple counts of tax evasion as well as cybercrimes.

The outlet's journalists and Ressa, in particular, have been targets of hate campaigns and have faced a deluge of insults and threats online.

In 2020, she was convicted of online libel under the Philippines's anti-cybercrime law, which critics say is used as a means to quash dissent.

Talking on Monday about the attacks and persecution she's suffered, Ressa said that she will not give up, and will continue to fight for her convictions. "I will fight because I have to believe in the rule of law," she said.

NewsClick (newsclick.in) is an independent media organization dedicated to covering news from India and elsewhere with a focus on progressive movements. Founded in 2009, NewsClick has, over the years, become one of India’s most consistent chroniclers of diverse people’s movements and struggles. NewsClick’s aim has always been to report, in depth, on news and views ignored by corporate media, whose agenda is dictated by the rich and powerful in the country.